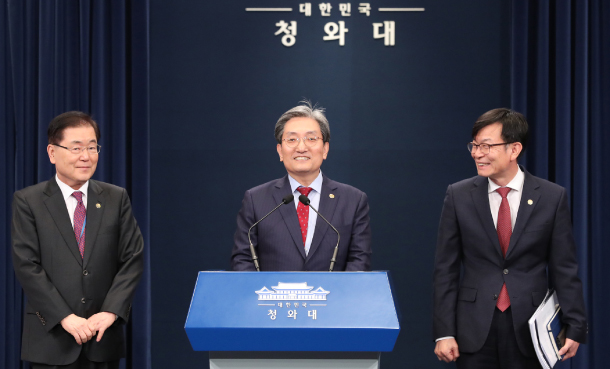 At the Blue House on Sunday, Chief of Staff Noh Young-min, center, Chung Eui-yong, head of the Blue House’s National Security Office, left, and Kim Sang-jo, the top presidential official for policy, right, hold a joint press conference to give policy briefings for the second half of President Moon Jae-in’s five-year term. [YONHAP]

President Moon Jae-in’s chief of staff promised tangible improvements in the economy, education and welfare systems during the latter half of Moon’s five-year tenure in a press briefing Sunday.

“If the first two and a half years of the administration were about reforming the framework of the country,” said Noh Young-min in a press briefing at the Blue House Sunday held jointly with National Security Director Chung Eui-yong and Blue House policy chief Kim Sang-jo, “the latter two and a half years will be about taking the country forward and creating results that are tangible for the people.”

Noh started by addressing the state of the economy.

“Within the country, we face a low-growth economy, low birthrate and aging population,” Noh said. “Internationally, we are affected by the U.S.-China trade war and trade restrictions by Japan. These challenges tell us that we cannot survive through our former ways and will have to create foundational changes.”

According to the Bank of Korea, Korea may not achieve 2 percent growth this year for only the fifth time in its modern history. In 1956, it registered 0.7 percent growth after a bad harvest; in 1980, in the aftermath of the global oil crisis, it saw negative 1.7 percent growth; in 1998 during the Asian financial crisis, growth was minus 5.5 percent; and in 2009, in the global economic meltdown, it was 0.8 percent.

Noh said the administration will try to revive the economy by focusing on manufacturing and future-oriented technology while also building trade ties with other countries.

“The administration did well in salvaging the manufacturing sector, especially in the shipping and automotive industries,” he said. “It will invest more in future-oriented industries including 5G, artificial intelligence, big data analytics and bio health.

“The government tried to shift the economic paradigm of the country,” he said. “We pursued more inclusive welfare programs for dementia patients and created the so-called Moon Jae-in care [a program to expand state-run insurance coverage especially for the underprivileged].”

Moon has emphasized welfare and jobs since his presidential campaign of 2017. Under Moon, the welfare and job budget has enjoyed double-digit annual growth. In 2018, the budget expanded 11.7 percent, while for this year, it grew 11.3 percent to 161 trillion won ($139 billion), which is an all-time record.

The mix of increased spending on welfare and shrinking tax collections led to a record budget deficit in the first nine months of this year, according to the Finance Ministry.

“More needs to be done to bring tangible changes to the livelihoods of the people,” he said. “We’ll make sure not one person is overlooked in the welfare system.”

Relations with North Korea, Japan and the United States were also highlighted in the briefing.

“The advancement we made for peace on the Korean Peninsula has been phenomenal,” Noh said. “Maybe some people are frustrated with our policies [regarding the North], but compared to the security threats we faced two and a half years ago, our path forward becomes clearer.”

Moon met with North Korean leader Kim Jong-un three times in 2018, a record number of summits with the North for a Korean leader. Moon hopes to help North Korea’s economy by somehow building a single market for the two Koreas - an idea that cannot go forward as long as United Nations sanctions are in effect.

“While we cannot go forward with the idea because there are promises we made with the international community, the [South Korean] government will pursue it with patience, for peace on the Korean Peninsula,” Noh said.

In response to a reporter’s question on whether a military intelligence-sharing pact with Japan, the General Security of Military Information Agreement (Gsomia), will be terminated this month as announced by the Moon administration previously, Chung said Korea remains willing to talk with Japan about an extension.

“We are still open to discussing extending the agreement with Japan,” Chung said. “We are ready to address separately security issues from historical issues when it comes to our relations with Japan… but at this point I think the people of Korea understand why we pulled out of the agreement.”

Moon on Sunday evening invited heads of the ruling and opposition parties to his residence to hold a closed-door dinner. The heads of parties have been invited for discussions with the president at the Blue House previously, but this was the first time they were invited to his home.

The last time they met was on July 18 to discuss Gsomia. Local media reports pointed to political and judiciary reform bills, economic policies and North Korea policies as likely topics for the discussion Sunday.