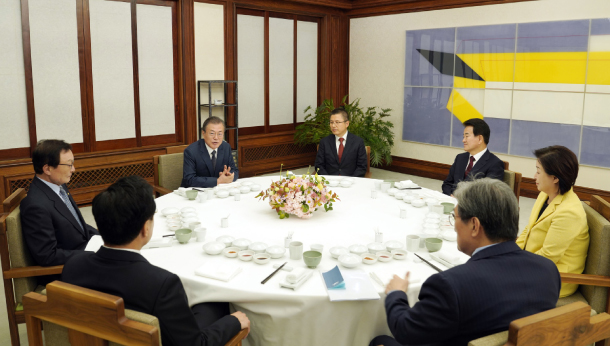 President Moon Jae-in has reached across the aisle for political leaders’ support for his administration’s decision to end a military intelligence sharing pact with Japan, sources from major political parties told the JoongAng Ilbo on Sunday.

Moon invited heads of five political parties to the Blue House for a dinner on Sunday to express his appreciation for their condolence visits when his mother passed away last month. The meeting, defined by the Blue House as “nonpolitical,” took place at the presidential residence.

Chairman Lee Hae-chan of the ruling Democratic Party (DP) attended the meeting with four other leaders of opposition parties. Hwang Kyo-ahn of the Liberty Korea Party (LKP), Sohn Hak-kyu of the Bareunmirae Party, Sim Sang-jeung of the Justice Party and Chung Dong-young of the Party for Democracy and Peace also attended the dinner.

The dinner started at 6 p.m. and continued for two hours and 40 minutes. While the Blue House did not give an official briefing on the dinner, sources from the political parties said Moon has asked for the ruling and opposition leaders’ cooperation for various outstanding issues.

One of the issues addressed at the meeting was Moon’s decision to terminate the General Security of Military Information Agreement (Gsomia) with Japan. The pact will formally end as of midnight on Nov. 22.

“It is a matter of principle,” Moon reportedly told the five leaders. “Particularly on the issue of Japan’s economic aggressions and Gsomia, we need the cooperation of the parties across the aisle. Japan is speaking in one voice, but we see different voices. Just like Japan, I hope the parties will speak in one voice for matters that concern national interest.”

The remarks appeared to counter an argument often made by the conservatives in Korea as well as politicians, officials and experts of the United States that the termination of the Gsomia with Japan will hinder trilateral cooperation between Korea, Japan and the United States in the face of regional security challenges.

According to the party officials, Moon also rejected Bareunmirae Chairman Sohn’s advice that he needs to show some flexibility in the diplomatic row with Japan over the forced laborer issue. “Japan is not responding properly [to have diplomatic negotiations],” Moon reportedly said. “The forced labor rulings by the Supreme Court must be respected.”

According to sources, Moon also said “We need to think about the victims’ positions,” reconfirming the administrations’ stance that the Japanese companies that used the forced laborers must admit their responsibilities and provide compensations.

The row between Tokyo and Seoul intensified since late last year after the Supreme Court ruled that individual victims of forced labor during the Japanese colonial period are entitled to seek compensation from their employers. Japan maintains that a 1965 agreement has settled all compensation matters.

The feud spilled over to a trade spat in July when Japan removed Korea from the list of its trusted trade partners. Korea responded the next month by deciding to terminate the Gsomia with Japan.

According to sources, Sim of the Justice Party also said during the dinner that the government must find ways to bypass international sanctions to resume the Mount Kumgang tour. Moon reportedly showed his consent.

A bill to revise the current election system ahead of the April general elections, currently pending at the National Assembly, was a topic of a heated debate, sources said.

LKP Chairman Hwang strongly complained that the DP formed an alliance with other opposition parties and designated the bill as a fast-track item without consulting with his party. Sohn of the Bareunmirae Party, then, criticized Hwang by pointing out that the LKP had boycotted the process, not been excluded.

As the two conservative leaders bickered, Moon tried to calm them, sources said.

DP Chairman Lee also refuted Hwang’s claim that the largest opposition party was left out in the legislative process to fast-track the bill. He still proposed to Hwang that the two parties must cooperate more.

“I don’t think it was bad for the leaders to have a heated debate in front of the president,” Chung of the Party for Democracy and Peace said. “I told them that at the end of the day, the most important thing is making the people’s ends meet.”

Moon also told them that he wants to restore the standing consultative body among the leaders of the ruling and opposition parties and the administration, and Hwang responded positively that he will consult with the LKP members further on the plan.