Samsung Bioepis set to turn profit in 2019, its first ever

Samsung Bioepis set to turn profit in 2019, its first ever 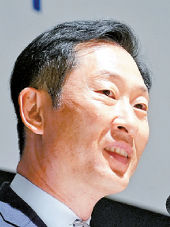 Samsung Bioepis is expected to turn a profit this year, its first ever, due to strong sales of its biosimilar products in Europe.

The company, of which 50 percent plus a share is owned by Samsung BioLogics and the rest by Cambridge, Massachusetts-based Biogen, announced Tuesday that it believes it will reach 1 trillion won ($860 million) in product revenue this year and will turn a profit for the first time since its 2012 founding. The revenue would be shared with Samsung Bioepis' commercial partners.

Samsung Bioepis reported a 103.1 billion won operating loss last year, and the company has never been close to an annual profit, though sales have been increasing steadily over the years.

“We already recorded sales figure by September that surpasses the total sales figure we reached last year,” said Samsung Bioepis President and CEO Christopher Hansung Ko during a press conference on the sidelines of BIOplus 2019 held in Coex, southern Seoul.
“Three autoimmune disease therapies have generated around 650 billion won in sales from the first quarter this year to third quarter in Europe.”

BIOplus, an annual conference for biopharmaceutical companies organized by the Korea Biotechnology Industry Organization and held since 2015, has 80 companies operating their own booths this year to market their products and find business opportunities. This year’s conference is believed to have attracted 2,000 visitors from 20 countries.

At the moment, Samsung Bioepis is selling four types of biosimilar products in Europe, while having one product marketed in the United States with three already being approved. In Korea, the company earned regulatory approval for four products, three of which are out on the market at this point. But the strong sales figure for this year has been driven most by performance marketed biosimilars in Europe.

Biosimilars are biological products that are approved based on proof that they are highly similar to other regulatory approved products. The drugs have no clinically meaningful differences in terms of safety or effectiveness from the reference product, but they cost less.

Since being introduced in 2016, Benepali has recorded a cumulative 1.5 trillion won in sales in the European Union. Samsung Bioepis said the biosimilar product is ahead of the original reference product in some markets.
A total of 170 billion won of Imraldi, a biosimilar of AbbVie’s Humira which was introduced in the European market in October last year, has been sold since its release.

Samsung Bioepis said those two products became especially successful in the European market due to their competitive costs compared to other biosimilar products. The company invested heavily on ensuring large-scale manufacturing capabilities for those products, which has kept their costs down.

“In the future, a lot of biosimilars from different companies for the same reference product will be released simultaneously,” Ko said.

“If there’s no cost competitiveness, the biosimilar will be thrown off the market. A lot of the companies are not prepared for that, and we have around 15,000 liters in production capacity while most of others have around 2,000 liters, so that provides us cost competitiveness.”
Despite reporting strong numbers for this year and having additional drug development plans, Ko said Samsung Bioepis is not looking to go for an initial public offering on any stock market, as the company is already well financed with support from Samsung BioLogics.