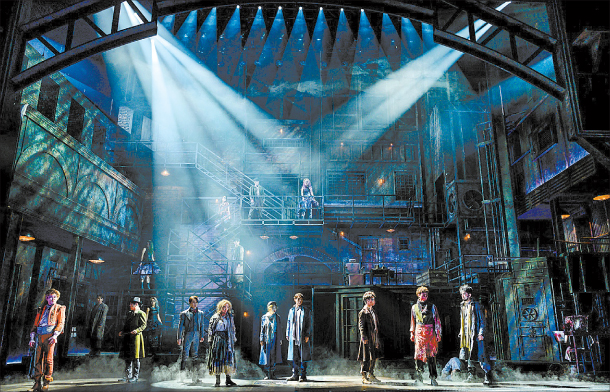 The thriller “Sweeney Todd” takes the stage in Korea for the first time in three years. [OD MUSICAL COMPANY]

The musical thriller “Sweeney Todd” is back in Korea.

After its premiere on Broadway in 1979, it became the signature work of American composer and lyricist Stephen Sondheim.

When the musical was first unveiled to the public, it was praised by critics. They wrote that “Sweeney Todd” took the musical from a form of entertainment to the realm of art.

The musical was instantly dubbed a “sensational masterpiece” and took home eight awards, including Best Musical at the Tony Awards the year it premiered.

Since then, it has been remade multiple times around the world, but the musical has only been staged twice in Korea — in 2007 and 2016.
The year it premiered in Seoul, it won the Best Foreign Musical award at The Musical Awards for its artistic and quality presentation, but it was not immediately well-received by local audiences.

The local musical market at the time was still in its early days. In the early 2000s, most people preferred musicals with bright, lyrical music. There was little room for shows like “Sweeney Todd,” with its discordant music and swear-filled lyrics. The bloody revenge drama failed to captivate musical fans.

But things had changed when the musical returned to Korea in 2016. Local audiences had grown tired of musical with obvious and predictable plots, and they were in need of something new. “Sweeney Todd” became an appealing alternative with its grotesque and artistic approach to storytelling.

Featuring Cho Seung-woo, one of Korea’s top musical stars, as the lead role also ensured that the show was a huge success.

It took another three years for the musical to return. The musical sold out two minutes after tickets became available online.

Set in 19th century England, the musical revolves around a barber named Benjamin Barker, who is played by Cho. He is living a happy life with his beautiful wife and daughter, but everything changes when he is falsely accused of a crime by Judge Turpin. The barber eventually loses his family and is exiled to Australia.

Barker returns 15 years later, renames himself Sweeney Todd and attempts to get revenge on Judge Turpin with the help of his accomplice Mrs. Lovett, who will be played by Oak Joo-hyun.

Todd and Mrs. Lovett decide to make pies using human flesh. By doing so, they are venting their anger about a society full of aristocratism and social absurdities.

Corruption, conspiracy, insanity, revenge and murder are all covered in “Sweeney Todd,” but the musical is not completely creepy and depressing from beginning to end. The show also has its fair share of humor throughout, which keeps the mood light.

A major makeover was made to the set this time around, especially compared to the minimalist stage featuring a single, three-story structure that accompanied the production in 2016. Some said that the previous stage was “too humble.”

Set designer Paul Tate dePoo III, known for his scenic design for the “Titanic” musical, was hired to design the set for the show. He upgraded the whole set in accordance with the size of the grand theater that the musical is being staged in.

A metal structure that was inspired by a deserted factory located in a back alley of London is the show’s main backdrop, and the stage is filled with large props, such as a metal bridge that moves along the walls, a cauldron belonging to Mrs. Lovett and the platform where Todd’s barber shop is located. The props move by themselves in order to keep up with the fast-paced story.

Actor Cho is immersed in the role of Todd as always, but this time he reportedly tried to change the way he projects his voice so that he can make his character sound more powerful.

The musical boasts a stellar cast including Cho, Oak, Hong Kwang-ho and Park Eun-tae, who alternates in the role of Sweeney Todd with Cho.

Each performer is talented enough to sing their own solo songs, but their collaborative work is important because most of the numbers are performed in ensembles.

The highlight of the first act is the ending song titled “A Little Priest.”

Todd and Mrs. Lovett agree upon making pies with human flesh, and then they begin to sing a duet by enumerating all the types of pies they can make, one by one. It is surely one of the most hilarious scenes.

“This is [a pie made with the flesh of] a lawyer. That could be expensive. Its texture is chewy maybe because [the lawyer is] all bark and no bite.” The two actors keep spitting lines as they follow the changing rhythm. Watching the two sing the song, audiences will see them not only as actors, but as artisans.

One of the show’s memorable lines is: “In human history, the upper class always preys on the lower class.”

Although “Sweeney Todd” is a thriller, many people find it entertaining, maybe because the musical makes fun of those who exploit the less powerful with its bittersweet satire.