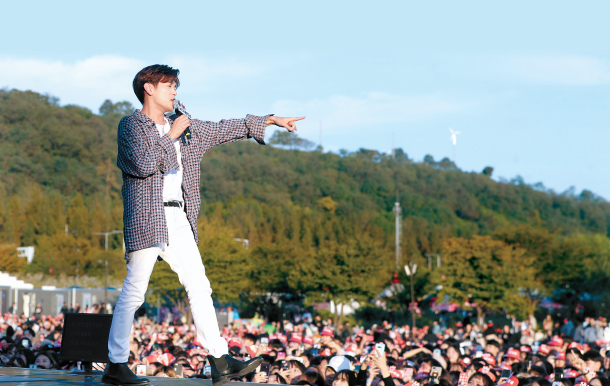 It may seem like Eric Nam has got it all — he is a successful singer-songwriter who recently wrapped a world tour and one of Korea’s most famous celebrity interviewers who frequently gets to meet and chat with Hollywood stars during their visits to Korea.

As a Korean-American, his journey as a solo artist has been far from easy, however. Born and raised in the United States, Nam is constantly called out by music producers for singing in Korean with an English accent, the 30-year-old revealed during an interview on Wednesday.

“I’ve faced a lot of stress about my pronunciation. Producers would tell me it was too difficult to understand my lyrics,” he said.

But with “Before We Begin,” Nam’s latest album, the singer is finally free to be himself. The eight-track “pop, R&B and rock” release is filled with songs sung entirely in English and features collaborations with American musicians like Marc E. Bassy and Steve James.

“Before We Begin” will also show listeners around the world that there is more to Korean music than boy and girl groups, Nam hopes. 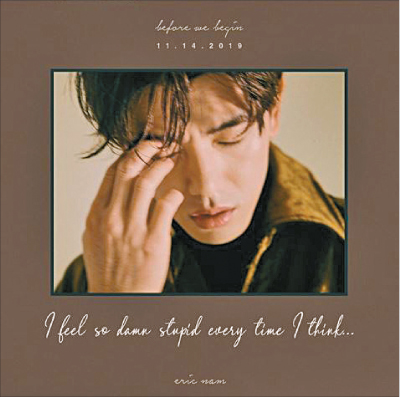 Q. Why did you decide to release an album in English?

A. My fans probably know already, but I have wanted to perform in English ever since I debuted as a singer.
English is a lot more comfortable for me than Korean. I almost always work on my music in the United States and in English. My Korean songs are songs that I’ve translated from English that I think will appeal to local audiences. That process is usually really long and stressful, and I worry about whether my message will be delivered the way I want it to be.

But when I make music in English, I can express myself a lot better and pay less attention to correcting my Korean pronunciation. I think I was a lot more comfortable and confident working on this album.

I was also looking for the right timing, and I think K-pop is receiving a lot of love and attention overseas today. But many people still think K-pop is just made of BTS, Blackpink, or other big idol groups. I wanted this album to be a way to share diverse aspects of K-pop.

Also, K-pop is often seen as a category of its own, even if groups like BTS might have more global album sales than American artists. I think singing in English might be the best way to close the gap.

Where did you get your inspiration for this album?

Musically, I’ve been listening to a lot of pop artists like Zayn, Harry Styles and Troye Sivan, thinking of how I can express myself in my songs like them.

“Love Die Young” is a song I recently wrote in July. On the surface, it might seem like just a love song begging someone not to leave, but it actually reflects my mental state at the time. I had just performed 12 concerts in 18 days in Europe right before I went back to the United States to work on my album. My health had deteriorated, I was under so much stress and I was just really burned out.

A lot of thoughts were running through my head. I asked myself why I was living like this, but at the same time, I really loved my work. “Love Die Young” reflects those complicated thoughts — I’m singing about not wanting to give up my love, life, passion and career.

How did you get to work with artists like Marc E. Bassy and Steve James?

I’ve been a fan of Marc E. Bassy for a while. Around last summer, when he came to perform in Korea, I went to his concert and met him.

I was actually planning to sing “Congratulations” by myself, but I also wanted to work with an artist who was popular and respected in America. I requested to collaborate with Bassy, and he eagerly agreed and wrote and recorded the second verse for the song in just a couple of days. I was so thankful and relieved, and I think he’s been a really big help for this album.

Steve James is a prodigy who produced music for Justin Bieber at age 15. I got pretty close to him when we worked on the song “Missing You” and performed together on my Europe Tour. He told me he had made a remix version of “Runaway,” which I released in May, so we decided to include that on the album.

How has the response been since you’ve made your global debut?

I don’t want to say I’m making my global debut. I think I’m closer to testing the waters with this album. That’s part of the reason why I named this album “Before We Begin,” like a preview of what’s to come.

But I think the timing is really good, with a lot of Americans showing interest in Asian and K-pop artists. I went on a press tour in the United States last week, doing photo shoots and interviews, and there were so many media outlets, like Time and Billboard, that came to encourage me. It was like a dream, and they gave me really positive feedback on my music.

Besides being a singer, you’re also known for appearing on various TV shows and doing celebrity interviews. What are your plans for television?

I haven’t appeared on television as much in the past year or two. I wanted to focus more on music and being a singer, rather than have people recognize me for the advertisements or shows I’ve done.

I’m really grateful for the channels I have worked with and think of TV shows as great opportunities, but it can be difficult to reap what you sow after filming for the entire day. Even when I’m part of the cast on a variety show, sometimes I feel like I’m not doing anything else besides laughing at other people’s jokes. I want to focus on filming shows that are more musical like “Begin Again” from now on.

As for the interviews I do with Hollywood stars, it’s something that I enjoy and feel confident doing. I get to meet a lot of different people and I often hear positive feedback from my interviewees.

Since I’m dreaming of making music for a global audience, I think it’s also a really great way for me to network. It’s my dream to meet the celebrities that I’ve interviewed, like Will Smith and Jamie Foxx, at the Grammys and thank them [for their support].