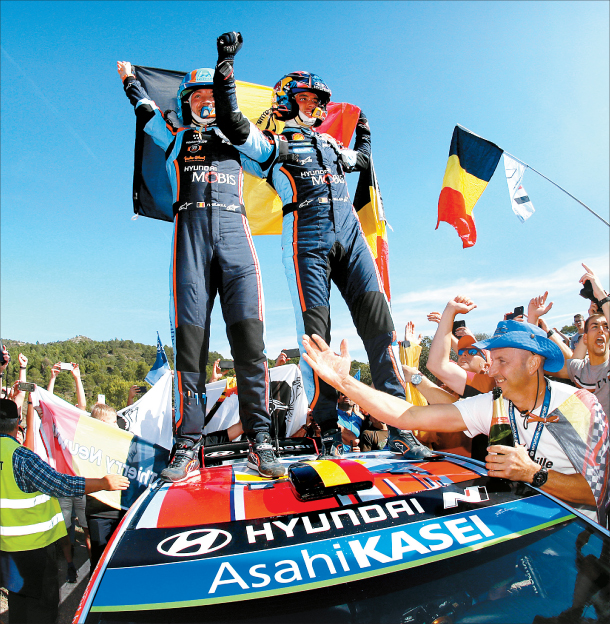 Thierry Neuville, right, celebrates after winning the Rally de Espa? during this year뭩 FIA World Rally Championship. Hyundai Motorsport won its first manufacturers?title, with the final rally of the season canceled due to fires in Australia. [HYUNDAI MOTOR]

Hyundai Motor won its first manufacturers’ title in the FIA World Rally Championship (WRC) after the final rally for the season was canceled.

The automaker announced Wednesday that Hyundai Motorsport finished first with a margin of 18 points over its nearest rivals as the last round was canceled due to bushfires in the New South Wales region in Australia.

The cancelation of the final round originally scheduled for Thursday to Sunday allowed Hyundai Motorsport to score a total of 380 points in 13 rallies for the season and beat Toyota Motor, the defending champion.

WRC, which first started in 1973, is an auto racing championship recognized as the top competition in international rallying. Every year, 14 three-day-long rallies are held on a diverse range of surfaces. Hyundai Motorsport, established in December 2012, took four wins in 2017 and three in last year’s season after making its debut at Rallye Monte-Carlo in 2014.

Hyundai Motor said that its rally team will revise its crew line-up and make additional preparations to defend its title for the 2020 season. Its rally team also participates in customer racing and electric racing projects on top of competing in WRC.