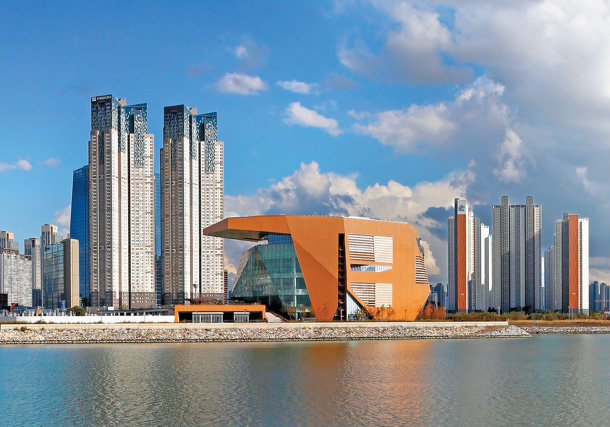 The classical concert hall of the Art Center Incheon opened its doors on Nov. 16, 2018, in Songdo’s International Business District in Incheon. It plans to establish a museum and an opera house in the near future. [ACI]

When Lotte opened its state-of-the-art classical concert hall on the 7th to 11th floors of the Lotte World Mall in Jamsil, southern Seoul, in August 2016, Seoulites who could frequent the venue praised its vineyard-style interior and its beautiful outdoor terrace that offers fresh air and a great view during intermissions. People living in the outskirts of Seoul, in places like Incheon and Gyeonggi, who wanted to see world-class performances had to use jam-packed public transportation options or suffer through bumper-to-bumper traffic to get to the concert in time.

But a new, 1,727-seat concert hall that opened up a year ago in Incheon’s Songdo International Business District has classical music-loving Seoulites envying those in Incheon and the nearby Gyeonggi area who are able to easily enjoy the top-of-the-line Art Center Incheon (ACI) that is not only equipped with the latest features of a concert hall but also a vast ocean view and a breeze that can be enjoyed on the balconies not far from home.

The center started off with a bang on Nov. 16, 2018 with an opening concert by the Incheon Symphonic Orchestra, followed by a concert by the Orchestra dell’Accademia Nazionale di Santa Cecilia from Rome accompanied by Korea’s star pianist Cho Seong-jin the next day. Tickets for both concerts sold out within a minute. 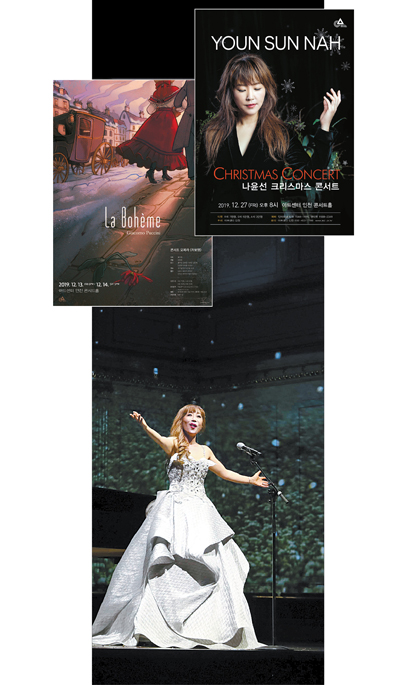 Soprano Sumi Jo performed a solo concert on Nov. 6 at the ACI with The English Concert. The posters show upcoming concerts at the ACI including a concert opera “La Boheme” on Dec. 13, left, and jazz vocalist Youn Sun Nah’s Christmas Concert on Dec. 27. [ACI]

If you build it, they will come

Conventional concert halls are shaped like a rectangular shoe box, whereas the latest designs are mostly vineyard-style, like the Lotte Concert Hall. But, according to the officials from the Preparatory Task Force of the Art Center Incheon, the new concert hall has mixed the merits of both the modern vineyard style and the more conventional shoebox design.

“Such a design allows the stage to be closer to the auditorium and at the same time maximize the immersion level of the music,” said an official from the task force. “Difference in the seating will not be about the sound but the distance to the stage,” the official added, insisting that the audience members will be able to enjoy quality sound wherever they are seated.

“We are so proud to celebrate our one-year anniversary,” said Lee Won-jae, the commissioner of the Incheon Free Economic Zone Authority (IFEZ), which operates the ACI. “In order to become one of the artistic cities of the world, we have pushed forward with establishing Korea’s state-of-the-art classical concert hall in this international city and filling up this venue with quality content that is satisfying to both world class musicians and our audience members.” 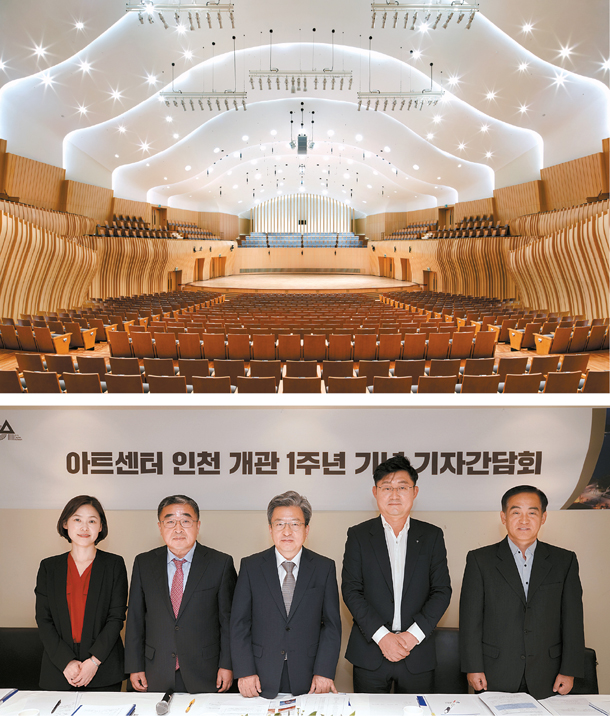 Top: Interior of the ACI’s Concert Hall. Above: Officials of the Preparatory Task Force of the Art Center Incheon and the Commissioner Lee Won-jae, center, of the Incheon Free Economic Zone Authority pose for a picture after the center’s first anniversary press conference in central Seoul early this month. [ACI]

The building was designed by DMP Architects, a local firm that also worked on the Lotte Concert Hall. According to the firm, the exterior design has been modeled after hands of a maestro and the whole building was created to make sure that “visitors can have diverse cultural experiences, not just with music, by the ocean.” There’s a path around the building where visitors can take a stroll and as well as a park where people can also visit and relax while looking at the ocean.

“I am taken aback by the view,” said Kim So-ra, who was breathing in fresh air in the vast terrace of the ACI during the intermission of soprano Sumi Jo’s concert on Nov. 6. Kim lives in southern Seoul but came “all the way to Songdo, for the first time, to experience ACI.”
“I feel like I’m at the Sydney Opera House,” Kim said. “As I look out at the beautiful ocean after listening to beautiful classical music, I think I can finally understand Claude Debussy’s love for the ocean and how it inspired him to write ‘La Mer.’ This place really wakes up all your five senses, culturally.”

According to Lee, ACI plans to establish a 15,000-square-meter (161,459-square-foot) museum and an Opera House that can seat 1,400 people next to the concert hall so that ACI can “truly become an arts center of multiple cultural facilities.”

“We have secured the land and completed the ground work,” said Lee. “If the government gives us the green light, I believe we can complete the construction of the two buildings in two years.”

The ACI also hopes to reach out to more global visitors who frequent the area as well as the many foreign expats who reside in the international business district.

“Because Songdo ultimately aims to become an international city, we expect to cater to the needs of foreign visitors as well,” said Lee, emphasizing the need to have program information and online ticketing available in English.

Over the past year, ACI has held about 40 classical concerts. It is a sad fact that concert halls outside Seoul usually don’t get as many star-studded acts or orchestras as the facilities in the capital city do, like the Seoul Arts Center, the Lotte Concert Hall and the Sejong Center for the Performing Arts. But thanks to ACI’s vicinity to Seoul, the Incheon International Airport and the fact that it’s located in Songdo, the new concert hall has managed to attract world-class artists such as soprano Sumi Jo, violinist Hilary Han, musical group La Fura dels Baus, pianist Krystian Zimerman, the Belcea Quartet, musical ensemble Les Arts Florissants and maestro William Christie among many others.

Soprano Jo’s show early this month was a sell-out show with the acclaimed ensemble, The English Concert.

“I try not to miss Sumi Jo’s concerts when she comes to Korea,” said Shin Young-ok, a resident in Songdo who says she’s an ardent fan of Jo’s. “It’s so great that I can now enjoy her concert in my neighborhood with great acoustics, and I love the fact that I don’t have to go through the traffic anymore to go all the way to Seoul to enjoy quality classical performances.”

The art center plans to increase the number of performances to 60 for its second year of operation and increase its budget as well.
“We cannot specify the details yet but the art center has organized diverse programs for the coming year so that we can attract different types of audiences to the venue,” said Park Ji-yeon, the head of the art center’s production team. “Since the venue is popular with women and young children, we also plan to expand our programming, such as afternoon concerts and easy classical music concerts for children during weekdays.”

Since 2020 marks several important anniversaries, including the 250th birthday of Beethoven, ACI plans to celebrate the great composer and his music throughout the year, like many venues throughout the world plan to do, according to Park. Other artists that have confirmed their visits next year include the Freiburger Barockorchester, a German Baroque Orchestra, who will be accompanied by harpsichordist Kristian Bezuidenhout and soprano Robin Johannsen in March. In May, the Scottish Chamber Orchestra will visit the ACI, followed by Italian violinist Fabio Biondi and Italian period-instrument Baroque orchestra Europa Galante, who will visit to perform a concert opera version of Vivaldi’s “Argippo” in July. This concert, according to ACI, will be an Asian premiere, and ACI will be the third venue in the world to stage it. Biondi will perform and conduct the piece.

For the past year, because the art center had to focus on creating a stable operation, it is true that many of the concerts were not exclusive to Songdo and they were held in Seoul as well.

“We’ll make sure to increase the number of concerts that can only be seen at ACI,” said Lee, “so that the art center and the district have their unique value and appeal as a global cultural hub.”