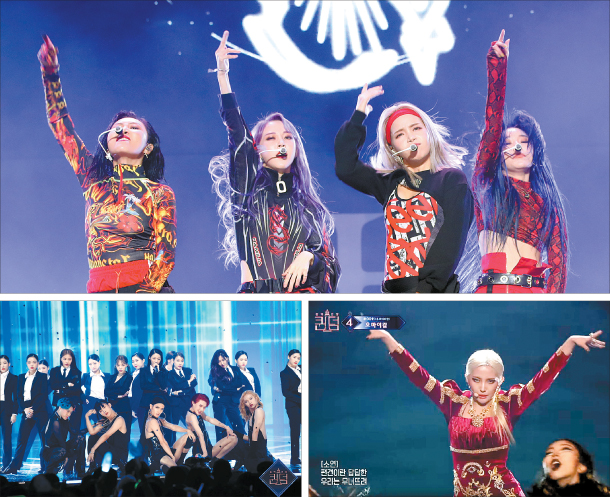 Many were skeptical whether “Queendom,” a music competition show where female K-pop acts were set to compete through their performances, would be successful when the program was first announced in July.

For one, the show was being produced by cable channel Mnet. While it is Korea’s leading producer of music audition shows, the broadcaster is notorious for pitting artists against each other in cutthroat competition and exaggerating the drama on set to keep audiences engaged.

Another major concern had to do with the lineup of participating acts. “Queendom” producers chose to invite five girl groups — (G)I-DLE, AOA, Mamamoo, Lovelyz and Oh My Girl — and one female solo artist — Park Bom, formerly of girl group 2NE1 — for its inaugural season. Because part of choosing the winner of the program was going to be determined by viewer voting, Mamamoo, famous for its large and loyal fan base, seemed like the obvious winner.

Fast forward three months — Mamamoo did win the show’s finale on Oct. 31, but “Queendom” left a much more important legacy.

Contrary to what many had feared, the show became a platform for more experienced female artists to be in the spotlight and show off their creativity with minimal interference from their agencies.

AOA, who debuted in 2012, shocked viewers when it departed from its usual sexy image during a gender-reversal cover performance of competitor Mamamoo’s 2018 hit “Egotistic.” The members dressed in formal black suits and had their male dancers wear tight-fitting miniskirts instead, as the latter danced seductively in choreography typical of many girl groups.

The act that created the most buzz by far was (G)I-DLE, who staged jaw-dropping theatrical performances with leader Soyeon heading the creative direction and much of the songwriting. In the performance of “Say No/Put It Straight (Nightmare Version)” for example, which garnered over 6 million views on YouTube, members danced in a sort of crazed zombie trance alongside contortionists while expressing heartbreak.

Thanks to its “Queendom” appearances, (G)I-DLE topped the monthly Brand Reputation Index for girl groups for the second consecutive time in November, topping other major acts like Blackpink and Twice. (G)I-DLE was at 20th place on the index in early September around the time “Queendom” premiered.

“(G)I-DLE [members] were good actors, which is something that idols need to be in order to express a variety of stories and emotions” assessed Mimyo, a pop culture critic and writer for online K-pop magazine Idology. “They also had a strong determination to show something different and benefited from being able to produce themselves. There are limits to producing music for another artist because you don’t fully understand what they can do best and what they want to express.”

Although ratings for the show weren’t high, “Queendom” ranked No. 1 on the top 10 list of the most buzzworthy non-drama TV shows for seven consecutive weeks according to data analyst GoodData. Contestants have also been gearing up for new releases riding on the show’s popularity — “Queendom” winner Mamamoo returned with its second full-length album “Reality in Black” on Thursday, and AOA is set to return later this month with a new EP titled “New Moon.” On the album’s lead track “Hip,” Mamamoo continues to go beyond typical girl group clichés and focuses on spreading the uplifting message that anyone can be ‘hip’ if they remain confident.

“I think we had a fixed mindset when it came to girl groups, that they fell into the categories of either ‘sexy,’ ‘innocent’ or ‘girl crush,’ but I think the show reminded us that girl groups are artists just like boy groups,” added Mimyo. “In the end, it was the talent of the artists that made the show become what it was.”

“We didn’t think the idol groups would step over one another to win, but I also didn’t expect that a show formatted so that [existing] artists upgrade themselves would do so well,” Jo told Yonhap during a recent interview. “What I felt during filming was that the teams were focused on trying something unique and showing a great performance.”

As the music industry continues to feel the aftershocks of “Queendom,” Jo confirmed that producers haven’t left out the possibility of creating a second season, or even a boy band version “Kingdom.”

The success of “Queendom” comes as a bright spot for Mnet during a very challenging time for the channel and its operator CJ ENM, Korea’s largest entertainment conglomerate.

Two of Mnet’s veteran music show producers, credited with creating the popular “Produce 101” series, were arrested last week over accusations that they had manipulated votes from viewers to choose winners rather than reflecting the actual picks. Police are currently investigating whether high-ranking executives at CJ ENM were involved as well.

Since “Queendom” launched after the “Produce 101” fiasco surfaced, the show producers made efforts to assure viewers even before the show began that they were taking the rigging scandal very seriously and would take measures toward to ensure an honest ballot-counting process.

“We invited around 10 people unrelated to the company to confirm that the tally of the text votes we received was equal to the number that we broadcasted on screen for both ‘Queendom’ and ‘Show Me the Money 8,’” a spokesperson from Mnet told the Korea JoongAng Daily. “We are considering different ways to improve transparency for next year’s upcoming show ‘Teen Singer,’ including the option of doing away with voter texting altogether.”