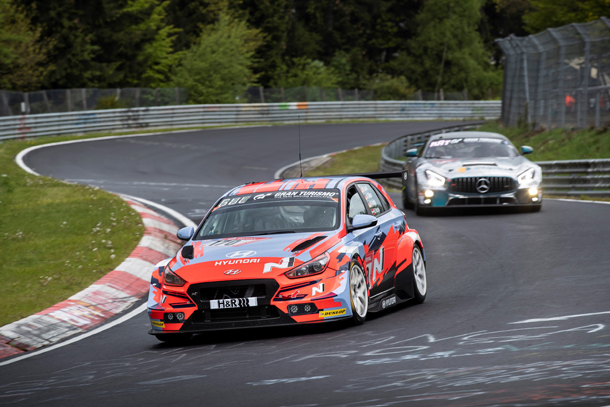 Hyundai Motor’s i30 N TCR is competing at the 2019 24 Hours Nurburgring race.

LEE DONG-HYUN
The author is a deputy head of industry 1 team of the JoongAng Ilbo.

Nürburgring is a motorsports circuit in Rhineland-Palatinate, Germany. While some believe it was built by Hitler, that’s not true. Hitler had only some involvement as the automobile industry was booming in Germany after World War I.

Nürburgring is made up of the 20.8-kilometer-long (12.9-mile-long) Nordschleife in the north and the 5.1 kilometer-long GP-Strecke in the south. The Nordschleife is nicknamed “the Green Hell.” It is considered the most cruel road in the world with 73 sharp curves and a series of ups and downs. Many racers have lost their lives here. F-1 Grand Prix legend Niki Lauda had a disastrous accident in 1976, which suspended F1 races that year.

Currently, it is known as a site where carmakers from all around the world test the performance of their models. From supercars like Ferrari to Hyundai Motors, it is considered the holy land that has to be visited in the course of developing a new model. The lap time in the Nürburgring circuit is the pride for high-performance automobile makers.

In September, Tesla claimed that its Model S has set an unofficial record for a four-door electric car. It shortened the record set by Porsche’s Taycan — 7 minutes 42 seconds — by 19 seconds. But the record is not official.

Unreasonable promotion of the record means that competition in the automobile industry is so fierce. Hyundai Motor is testing its high performance brand “N” at Nürburgring but has not released its lap time. Hyundai Motor does not need to set a record right now. But it would be nice if it releases the record to show how much it has grown. Someday, a Hyundai may break the lap record at Nürburgring.