The Supreme Court upheld Friday a high court ruling that Um violated the Political Funds Act by receiving 200 million won ($172,000) in illegal election donations before the April 2016 general election in which he won a seat representing the Milyang, Uiryeong, Haman and Changnyeong Districts of South Gyeongsang. 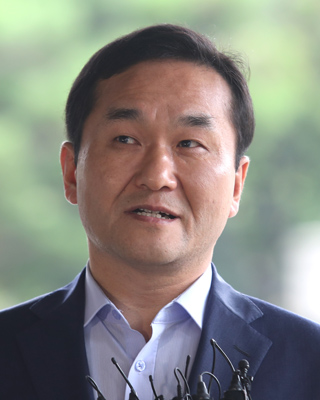 Both the districts and high courts had found Um guilty. The Supreme Court confirmed an 18-month prison term for Um and a 200 million won fine.

The punishments were heavy enough for Um to lose his lawmaker seat.

Um is the second LKP lawmaker to lose his seat in less than three weeks. Rep. Hwang Young-cheul lost his on Oct. 21 after the Supreme Court convicted him of violating the same law. He was fined 5 million won and given a suspended prison sentence of two years.

The LKP is still the second-largest party in the assembly behind the ruling Democratic Party (DP), which has 128 lawmakers.

Of the 300 members of the 20th National Assembly, 14 have surrendered their seats, mostly following convictions for crimes. Rep. Bae Duk-gwang of the LKP voluntarily resigned over a corruption scandal in 2018.

Of those 14, 10 were from the LKP, three from the People’s Party, the predecessor of the Bareunmirae Party and the Party for Democracy and Peace, and one was from the Minjung Party.

The DP and Justice Party have lost no reps.