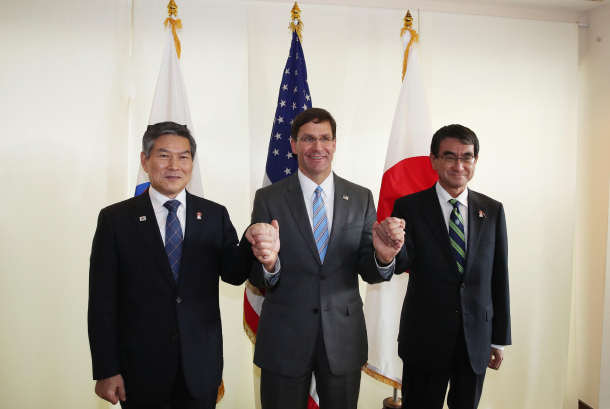 The defense ministers of Korea and Japan held a bilateral meeting Sunday in Thailand to discuss their endangered intelligence-sharing pact, the first such one-on-one talks since Seoul announced it would withdraw from the agreement last August.

Jeong’s meeting with Kono was held in Bangkok on the sidelines of the Asean Defense Ministers’ Meeting-Plus, a gathering of defense ministers representing Asean and other countries. The meeting lasted for about 40 minutes from 10:05 a.m. on Sunday at the Avani Riverside Bangkok Hotel in the Thai capital.

“On the Gsomia issue, our talks were on the theoretical level,” Jeong told a press conference following the meeting. “I told [Kono] to make efforts so that [the issue] can be resolved well diplomatically, since there are many things to be resolved diplomatically rather than in the national defense realm.”

Jeong said Kono told him that Japan hoped for Gsomia to remain in place.

The Korean defense minister said he told his Japanese counterpart that it was “inevitable” for Seoul to announce its withdrawal from Gsomia because Tokyo “damaged the security trust” between the two countries by carrying out export restrictions against Korea.

Asked by a reporter whether he expected Tokyo to change its stance on the export restrictions with less than a week before Gsomia expires, Jeong refused to comment.

Gsomia formally expires as of Friday midnight unless Korea recants its decision to walk away. The Moon Jae-in administration decided on Aug. 22 to withdraw from the pact following Japan’s removal of Korea from a list of preferred trading partners.

Seoul has said it could “reconsider” withdrawing from Gsomia if Japan pulls back on the economic retaliations, which Tokyo has refused to do.

Following the Jeong-Kono meeting, the two defense ministers joined with U.S. Secretary of Defense Mark Esper in Bangkok on Sunday for a trilateral ministerial meeting, in which Gsomia was further discussed.

Washington has been pressing Seoul not to leave the intelligence-sharing pact, saying the only winners from that decision would be North Korea, China and Russia.

In a press conference held before the three-way meeting began, Kono stressed the need to promote “trilateral defense cooperation,” saying the world has yet to see “concrete progress” in the disposal of North Korea’s nuclear weapons and missiles.

With the Gsomia deadline nearing, multiple diplomatic sources told the JoongAng Ilbo recently that Washington is currently reviewing a “Plan B” that involves “upgrading” the three-way intelligence-sharing pact among Seoul, Washington and Tokyo, called the Trilateral Information Sharing Arrangement (TISA).

Even without Gsomia, TISA, which was signed in December 2014, allows Seoul and Tokyo to share intelligence information between each other, but only through Washington, and only on the subjects of North Korean nuclear weapons and missiles.

The diplomatic sources did not say for sure how the United States is thinking about upgrading the trilateral arrangement, but one possibility is for the arrangement to be upgraded into an agreement, and for North Korea’s conventional weapons to be included among the subjects to share information about.

Some military officials and pundits in Korea, however, expressed doubts about whether an upgraded version of the TISA would be enough.

Ryu Jae-seung, a former senior official at the Korean Defense Ministry who led the National Defense Policy Office, said Seoul would be placed in a “disadvantageous” position without Gsomia, especially in an urgent situation. Seoul’s cooperation with Tokyo through TISA wouldn’t look so good to the greater world if it withdraws from Gsomia, Ryu warned.

“For Seoul to withdraw from Gsomia and say it would fulfill [its duties] under an arrangement that’s not legally binding would seem ironic to the international society,” said Ryu.