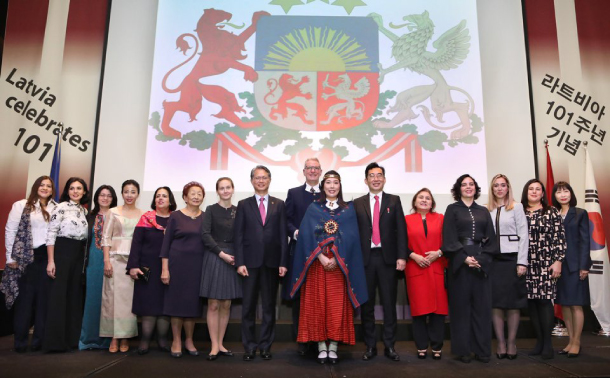 Latvian Ambassador to Korea, Peteris Vaivars, center in back row; Rina Okumura-Vaivara, the ambassador’s wife, center; Kwon Kyoung-hoon, honorary consul general of Latvia to Korea, sixth from right; Deputy Minister for Multilateral and Global Affairs at Korea’s Ministry of Foreign Affairs Kang Jeong-sik, eighth from right; and spouses of ambassadors celebrate the 101st anniversary of Latvia’s proclamation of independence, which falls on Nov. 18, at the Grand Hyatt Seoul in central Seoul on Friday. [PARK SANG-MOON]