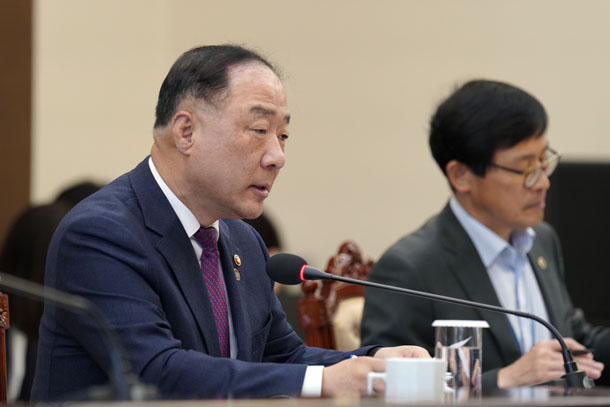 Deputy Prime Minister for the Economy and Finance Minister Hong Nam-ki briefs President Moon Jae-in about his plan for next year’s economy at the Blue House on Thursday. He said he would disadvantage ministries that fail to use the budget allocated to them this year. [BLUE HOUSE]

Stealth aircraft developed by Lockheed Martin in 1974 are high-tech fighter jets with stealth technology that avoid detection by radar, infrared or audio sensors. Thanks to these characteristics, “stealth” refers to something that is done quietly and secretly or whose substance is concealed.

A slush fund account is often called the “stealth account.” Stealth accounts are restricted from electronic transactions such as online and mobile services, and the account owner must visit the branch to make a deposit or withdrawal. Stealth tax is the tax that taxpayers are not aware of, and indirect taxes such as value added tax is included here.

The Blue House seems to have stealth storage that the government and people cannot detect.

Blue House spokesperson Ko Min-jung said on November 11, “Crops in storage are not meant to be reserved. When they are piled up and not used, they will go rotten. It is saved to be used in difficult times.” But unlike what the spokesperson said, our storage is emptying out.

The consolidated government balance has usually been in surplus, including the balance in social security funds such as the national pension and employment insurance that accumulate pension sources.

Vice Prime Minister for the Economy Hong Nam-ki said that the unused budget will be minimized for this year and that if ministries don’t use their entire budget this year, there will be disadvantages for them. As the president said, the expansion of fiscal spending seems to be a must, not an option. So every remaining grain will likely be used. I hope there will be a stealth storage filled with fresh grains.