Americans storm out of cost-sharing talks

Americans storm out of cost-sharing talks 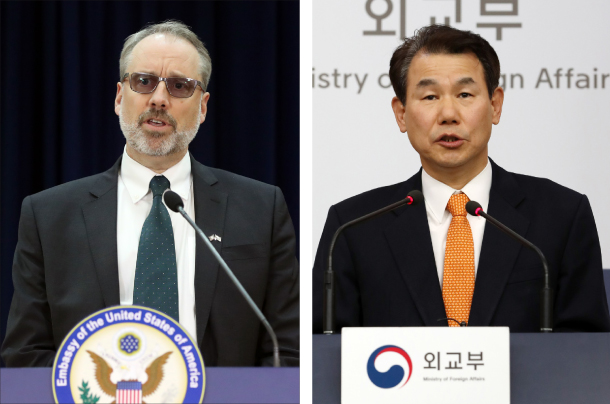 Left: James DeHart, the U.S. chief negotiator for the 11th Special Measures Agreement (SMA), holds a press briefing at the American Center Korea in Yongsan District, central Seoul on Tuesday, after walking away from the third round of talks to negotiate the next bilateral cost-sharing deal. Right: Jeong Eun-bo, Korea’s chief negotiator for the SMA, holds a press briefing later on in the afternoon at the Ministry of Foreign Affairs in central Seoul to explain why the talks were cut short. [YONHAP]

Talks between Seoul and Washington on sharing of costs for U.S. troops were cut short Tuesday after Korea resisted U.S. demands for a drastic increase in its contribution.

Korea’s chief negotiator, Jeong Eun-bo, and his U.S. counterpart, James DeHart, kicked off a third round of talks in Seoul to negotiate the 11th Special Measures Agreement (SMA) on Monday.

The talks were set to run through the next day, and the meeting resumed at 10 a.m. Tuesday. But it came to an abrupt end around 80 minutes later after the U.S. chief negotiator walked out.

The Korean Ministry of Foreign Affairs quickly released a statement around 11:40 a.m. saying that the third round of talks did not go as planned. It said that Washington is trying to “drastically increase” Seoul’s share of defense costs by introducing a new article into the cost-sharing agreement, while Korea wants to maintain the framework established since the SMA was agreed upon in 1991.

In a rare move, the chief negotiators of both countries gave separate press briefings describing why the talks were cut short.

“Unfortunately, the proposals that were put forward by the Korean team were not responsive to our request for fair and equitable burden sharing,” DeHart, the senior adviser for security negotiations and agreements in the U.S. Department of State’s Bureau of Political-Military Affairs, told reporters at the U.S. Embassy in Seoul Tuesday an hour after walking from the negotiations.

DeHart continued, “We cut short our participation in the talks today in order to give the Korean side some time to reconsider, and I hope to put forward new proposals that would enable both sides to work toward a mutually acceptable agreement in the spirit of our great alliance.”

A career diplomat, DeHart arrived in Seoul for the third round of talks for the 11th SMA Sunday, his second visit this month.

Washington has been pressing Seoul to pay a drastically higher share of the cost of stationing 28,500 U.S. troops in Korea, with the reported figure being nearly $5 billion, five times higher than in the previous agreement. Under the current one-year 10th SMA implemented since March, Seoul agreed to pay 1.04 trillion won, which amounted to some $920 million at the time of implementation, or around 8.2 percent more than what Korea spent in the 9th SMA.

The agreement covers personnel costs for Korean civilians working for the U.S. Forces Korea (USFK), as well as construction and logistical support costs. Washington is believed to be trying to include items beyond these areas such as the deployment of strategic assets or joint military exercises.

Jeong held a press conference at 2:40 p.m. at the Ministry of Foreign Affairs and confirmed that the U.S. side walked away from the meeting.

“The negotiations today for the 11th Korea-U.S. SMA did not proceed as planned,” Jeong said. “The U.S. side’s position is to drastically increase [our] share of the defense cost by introducing a new article, while our side maintains that the share should be mutually acceptable within the framework of the SMA that Korea and the United States have agreed on over the last 28 years.”

He added, “No matter what the circumstance, we will persevere and do our utmost to ensure a fair share at a reasonable level to contribute to strengthening the Korea-U.S. alliance and our combined defense posture.”

The two sides began negotiations for the 11th SMA in September as the current deal expires at the end of this year. Negotiations have gone past the deadline in past years, including for the 10th SMA. Jeong acknowledged that “it is true that there is a considerable difference” in what Washington is proposing and what Seoul can accept. While Jeong said that a “schedule for the next Korea-U.S. working-level talks” is planned, “because the schedule for today did not go as planned, we will come up with necessary measures needed for that.”

Civic groups have protested Washington’s demand for an outrageous increase in Seoul’s share, holding a rally on Monday in central Seoul as the SMA talks were being held. The deal will require parliamentary approval.