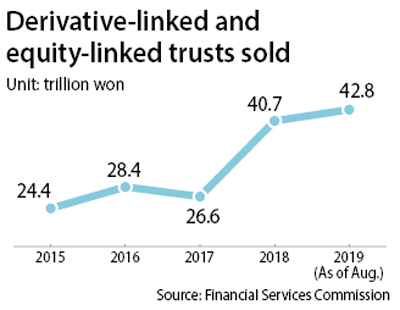 The Korea Federation of Banks (KFB), which represents the country’s major commercial banks, said that a series of meetings have been held to collect opinions from the industry.

“Starting this week, we’ve hosted meetings to gather officials at the KFB and representatives from member banks to discuss ways to respond to the measure,” a spokesperson at the federation said.

The move came after the Financial Services Commission announced its plan to prohibit banks operating in Korea from selling securities-linked and derivative-linked trusts, as well as DLSs and DLFs with a high risk of loss.

Market insiders predicted that the sales ban would actually only cover the derivative-linked products, as some have incurred tens of billions of won in losses and are found to have been sold with inadequate explanation or negligent sales practices from banks.

The inclusion of trusts that follow the securities and derivatives, some banks say, is excessive.

“The announcement came as a surprise because it was stricter than expected,” said a source in the banking industry who requested anonymity due to the sensitivity of the issue.

“The restriction on DLFs was predictable, but the ban on equity-linked trusts and derivative-linked trusts appears quite heavy-handed and could lead to a contraction in investment,” the source said.

The size of those trust products has recently seen steep growth as sales of the two products grew to 42.8 trillion won ($36.6 billion) as of August this year, from 26.6 trillion won in 2017.

The chief of the financial regulator acknowledged the criticism, vowing to discuss the issue with the industry.

“The officials at the Financial Services Commission are meeting the bankers today,” said Eun Sung-soo, chairman of the regulatory agency Wednesday.

“We will find out whether there is any misunderstanding over the proposal,” he said, adding that the decision is designed to regulate the trusts tracking derivatives and other high-risk assets instead of targeting all trust products.

In the latest announcement made last week, the government will also ban banks from selling private equity funds that have the possibility of losing more than 20 percent of their principal and make access to private equity funds much more difficult by tripling the minimum investment.

The regulator said that it will consult with the industry over the next two weeks before it finally enacts the planned regulation.