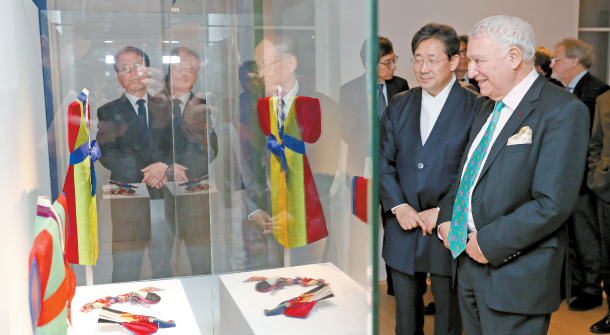 Guests at the opening ceremony of the Korean Culture Center in Paris on Wednesday take a look around the “Tekkal: Colors of Korea” exhibit organized by the National Folk Museum of Korea. Above, Jean-Daniel Tordjman, right, chairman of the France-Korea Ambassadors Club and Minister of Culture, Sports and Tourism Park Yang-woo, left, look at a display inside the exhibit. [MINISTRY OF CULTURE, SPORTS AND TOURISM]

PARIS, France — On days with heavy rain, this semi-basement building would frequently have a leaky roof, which meant that those inside would have to bring out buckets and place them underneath dripping rainwater coming from the ceiling. That’s not all. In the summer, the space gets stiflingly hot, and during the winter it is extremely cold and dry, and like anyone who has ever lived in a semi-basement, the people residing there hoped to get out as soon as possible. This may seem like a description of a scene from the hit film “Parasite,” which became the first Korean film to win the prestigious Palme d’Or at the 2019 Cannes Film Festival in France, but it’s actually the space used for nearly 40 years by the Korean Culture Center in Paris.

Before it celebrates its 40th anniversary next year, the Korean Culture Center in Paris finally got to leave its semi-basement office and move to a new complex building in the 8th arrondissement of Paris. To celebrate the grand expansion and relocation, the center held an opening ceremony on Wednesday that was attended by about 500 people. The newly purchased complex of the Paris center is comprised of three buildings, totaling an area of 3,756 square meters (40,429 square feet). This is the fourth-largest Korean culture center of the 32 centers across the world. It is also the fifth culture center to house three institutions in the same space — the Culture Center, the Tourism Organization and the Korea Creative Content Agency (Kocca).

“Now that these three organizations are under one roof, we can work closely together and amplify the synergy,” said John Hae-oung, director of the Korean Culture Center in Paris. “In the past, the scope of what we called culture was quite tight, but now the boundaries are broken and we include so much more in the scope of culture such as IT, gaming and tourism. Therefore, I believe it’s significant that Paris, which can act as the hub for all of the European Korean culture centers, will be equipped with such state-of-the-art facilities that are up to par with Korea’s prestige of the moment here in Europe.”

The Korean Culture Center in Paris opened in 1980, becoming the first center in Europe. Many fans of Korean culture say that was the first chapter of the so-called Korean wave which has led to the K-pop craze in France today. In 1993, the center organized an event introducing Korean cinema for three months at the Pompidou Center. In the late 1990s, the center made efforts to introduce Korean performing arts groups to France by supporting them to participate in French festivals like the prestigious Avignon Festival. Then, in 2010, K-pop was first “introduced” to Paris, with sell out concerts at Jennice Stadium featuring K-pop acts from SM Entertainment. According to the Ministry of Culture, Sports and Tourism of Korea, the SM Town concert in 2010 was organized initially with the help of government funds. But the shows turned out to be such a big hit that concerts held the following year needed no help at all. Young Parisians continue to sing and dance to K-pop songs today in crowded public squares and have been visiting the culture center in large groups to learn Korean language.

Saida Tlaheut, a young woman living and working in Paris, who says she is a “big fan” of Big Bang said she is excited that the “Korean Culture Center finally got a new home.”

“It’s such good news because as far as I know, there are so many people who want to learn something there, like Korean language, cooking and [other things,] but just can’t because the place is so small, so the classes they offer are so limited.”

Since she wasn’t able to sign up for a class, Tlaheut has been learning Korean on her own using YouTube. 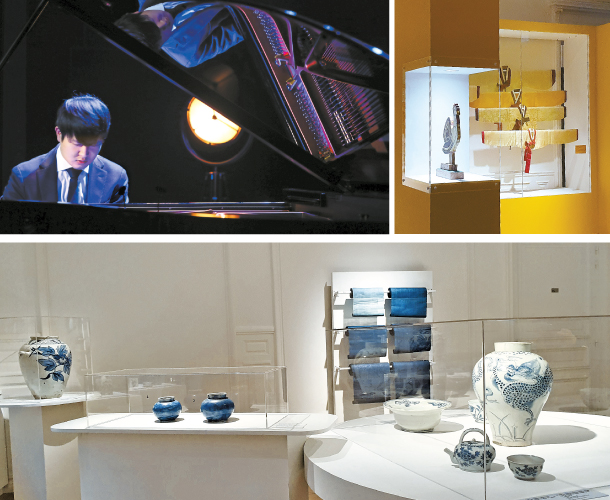 “It’ll be great if the center can increase the classes and the events and [become] a place where people like me, who just love Korean culture, can continue to discover the beauty of Korea,” she said, in Korean.

This is exactly what Minister Park Yang-woo of the Ministry of Culture, Sports and Tourism envisions the new Korean Culture Center in Paris will be.

“A playground,” said the minister. “When I was a high school and university student, I spent a lot of my time at the France Culture Center in Seoul. The center was like fresh spring water for the many young Koreans who were thirsty for culture and arts and it was indeed a place that opened up a new world for many of us. The beautiful French poems and novels I borrowed from the center kept me awake at night and the films that I could watch there amused me at a totally different level. Just like the France Culture Center in Seoul was a playground for many young Koreans 40 to 50 years ago, I hope that the Korean Culture Center in Paris can be such a place for the French people of today.”

Director John of the Korean Culture Center also said that the center can do so much more now that it has a new building.

The main building of the center is six stories high. The basement has a 120-seat auditorium where concerts and performances can be staged and films can be screened. It also has large exhibition halls that can be used by the three institutions housed in the center, as well as a library full of Korean books and lecture rooms where people can take the classes organized by the center. On the top floor, there’s a hansik (Korean traditional food) atelier where people can take cooking classes and experience Korean traditional cuisine.

“We also plan to focus more on IT when we get settled in this new building,” said John. “I think we can allow people to enjoy so much more of Korean culture through its powerful IT, which can be culturally refreshing as well.”

As the center is located near a neighborhood that is home to many shared offices that Parisians in their 30s float in and out of, John plans also to launch various programs that target the age group and their lifestyles along with the Korea Tourism Organization and Kocca. 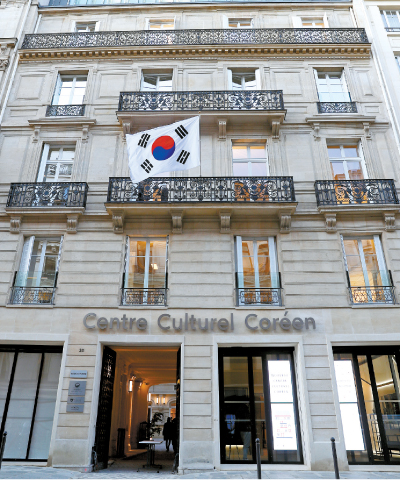 The main entrance of the new Korean Culture Center in Paris, which recently moved to a larger location for the first time in 40 years, on Wednesday. [MINISTRY OF CULTURE, SPORTS AND TOURISM]

For the opening, the National Folk Museum of Korea was invited to exhibit “Tekkal: Colors of Korea” at the center’s exhibition hall until next February. According to Kim Yoon-jeong, a researcher at the museum, the exhibition was one of the most successful exhibits held at the folk museum in 2016, and therefore, the Korean Culture Center of Paris wanted to put it on display.

Paris-based Korean artist Bang Hai-ja, 82, also came to the opening ceremony on Wednesday, and when she stepped into the new building, she said that she became emotional.

“This is just so beautiful and so spacious,” she said. “I came to Paris in 1961 and I think I continue to witness how Korean culture is perceived here. It’s been nearly 60 years, and I think this jump from a basement office to a complex building attests to the national presence and the power of Korea in Paris. I’m so proud of my country and feel appreciated.”

Bang hopes to see unique elements of Korea’s culture alongside “Korea’s traditional arts that show its 5,000-year history,” she added.
Fleur Pellerif, the former Minister of Culture and Communications of France, also came to the ceremony to celebrate the reopening.

“When I was serving as a minister from 2012 to 2016, I used to have a lot of discussions with the former Korean ambassador to France about finding the right location to move the Korean Culture Center,” she said. “Reopening the center at the time was a really important topic and it took a lot of time and many people’s efforts to find this place and also to refurbish it to make it what it looks like today. Therefore I’m so happy to see the center today in person and to see this beautiful place which I’m sure will be a great environment to foster exchanges between French people and Korean culture.”

Pellerif also thinks that the “interest of the French population in Korean culture has really increased a lot over the past few years, whether it be Korean cinema, K-pop, food, beauty or fashion.”

“I’m sure the interest in Korean culture is growing, even in the younger generations, and I’m sure this place will do a lot in that sense,” she added. “I’ve seen the programs the center will offer and the activities, classes, festivals lined up are all very great. I’m sure it will do a lot to make French people more aware of Korean culture.”

Attendees got to enjoy Korean chef Oh Se-deuk’s Korean dishes after the concert in the center’s hansik atelier. The food was paired with Korean and French alcoholic beverages.

“Now that the center is open, our job is to make ourselves known,” said John. “We plan to work with power YouTubers who are fans of Korean culture to create promotional videos for the center and its new programs.”

To celebrate the center’s 40th anniversary, the staff is gearing up to organize various events throughout the year under the theme “Palace.”

“I think the theme will really attract not just young people, but also an older generation of French people as there’s a lot to show about Korea’s royal cuisine, royal banquets, royal weddings, royal dresses and more.”