K5 orders being taken by Kia Motors for December debut

K5 orders being taken by Kia Motors for December debut 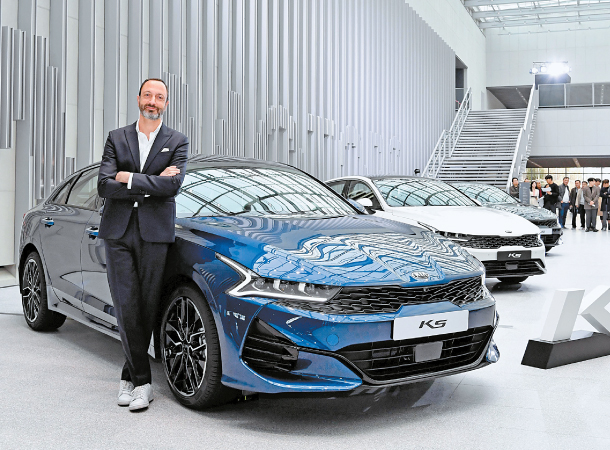 Karim Habib, head of design at Kia Motors, poses Thursday next to the new K5, scheduled for introduction next month, during a preview event held in Yongin, Gyeonggi. Kia Motors started taking orders for the third-generation K5 that day. [KIA MOTORS]

YONGIN, Gyeonggi - Kia Motors is taking orders for the K5 sedan, which will hit the market next month.

The second-largest automaker by sales in Korea announced during a media preview event Thursday that the third-generation K5, known as the Optima in the United States, will have an enhanced designed and a number of the latest technological features.

“The third-generation K5 is a symbolic model that hints the dramatic change for Kia Motors that will be leading the future mobility era,” said Karim Habib, head of design for Kia Motors, during the event held in Yongin, Gyeonggi.

“This new model will provide an enhanced user experience with enhanced design and [the] latest interactive technologies.”

The K5, which is expected to compete against Hyundai Motor’s Sonata sedan, also has a shorter trunk and a longer hood to maintain the dynamic feeling of the front.

In targeting customers looking for futuristic gadgets, Kia Motors said the new K5 comes with a range of features that digitally and seamlessly connect drivers with the surrounding environment. The new model has voice recognition control, air purifying, last mile navigation and the latest car-to-home technologies.

The model, offered with gasoline, liquefied petroleum gas and gasoline hybrid engines, is equipped with a 12.3-inch cluster and a 10.25-inch display infotainment system. Kia Motors said all K5 models will come with collision avoidance systems for the front, rear and blind spots, on top of a lane-keeping assist and adaptive cruise control.