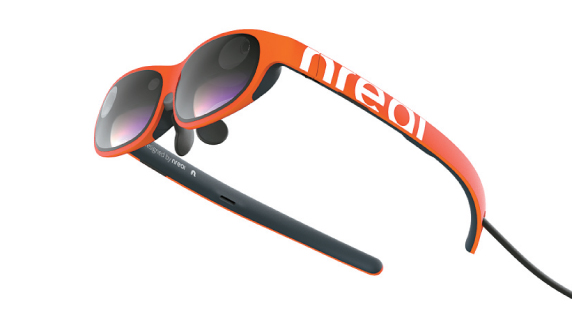 LG U+ is market testing augmented reality (AR) glasses that work with 5G.

The mobile carrier is cooperating in this initiative with Nreal, a Beijing-based company that won the Best Start-up award at this year’s CES. It showcased its 88-gram (3-ounce), $499 Nreal Light AR glasses at the trade show in January.

“Despite the positive market outlook, the consumer barrier to AR glasses was still high due to the high price,” said Song Dae-won, LG U+’s vice president in charge of future devices. “The goal of our partnership with Nreal is to spread AR glasses to the public so that more customers can experience LG U+’s 5G content.”

LG U+ will start selling Nreal Light glasses in the first half of 2020. Through the first quarter of 2020, the telecommunications company will allow customers to test the device at 35 LG U+ stores nationwide and at five pop-up stores located in movie theaters and subways.

At LG stores, AR glasses will be offered connected to V50 ThinQ phones, the latest 5G model from LG Electronics. The high-tech eyewear can operate for as long as an hour and a half on a fully-charged phone.

The glasses have to be connected to the phone to work, as a wireless version would be heavier and would be prone to overheating.

LG U+ has been investing in the development of AR programing, videos and services that can be viewed with a smartphone.

One offering from the company allows viewers to watch celebrities dance in real-life backgrounds and change the viewing angle.

LG also offers sports videos, online games that allow for a high-level of interaction and other celebrity-related content.

“The AR content we offered before was played on smartphone screens. This limited the level of immersion for users, but AR glasses allow for a realistic, immersive viewing experience,” said Song.

LG said it plans to develop more AR services in the near future, including a cloud PC service that can mirror desktop screens in AR glasses. A primary focus will be on entertainment. Next year, the company will allow for the use of Nreal glasses at the showrooms of LG Hausys, a company that produces housing materials and components.

“We’re also preparing to release a service where our users can create AR content on their own,” said Park Jae-kyu, leader of LG U+’s AR business team. “The investment put into AR content this year was around 10 billion won [$8.5 million]. The plan for next year is to do a similar amount or possibly more.”