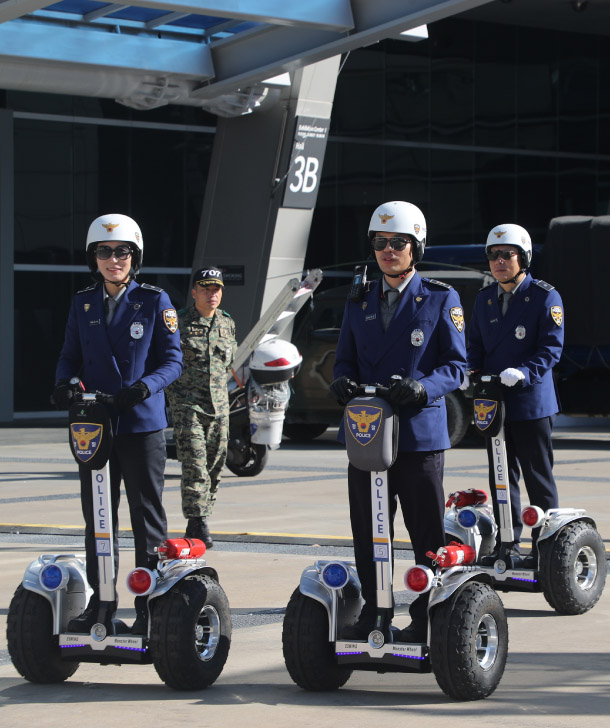 Policemen on Segways patrol on Thursday outside Bexco in Busan, where the 2019 Asean-Republic of Korea Commemorative Summit will be held on Monday and Tuesday. [SONG BONG-GEUN]

According to the Korean Central News Agency (KCNA), Moon sent a personal letter to Kim on Nov. 5 inviting him to attend next week’s South Korea-Asean summit in Busan.

The report was the first confirmation that Moon sent a letter formally inviting Kim, although the South Korean leader has publicly said he hoped Kim would come.

The report also revealed that Seoul asked for a special envoy to come if Kim could not. “We also fully understand the distress and agony of President Moon to hold on to the opportunity to make it a new occasion for unraveling the present North-South relations,” the English-language KCNA report said. “This can be known from the fact that in the wake of the personal letter, there were several earnest requests for sending even a special envoy, if the State Affairs Commission Chairman [Kim] could not come.”

KCNA said Pyongyang was skeptical about the proposals because Seoul is heavily relying on Washington to resolve inter-Korean issues. “Everything needs its suitable time and place,” the North said, adding that it found no reason for a meeting between Moon and Kim at the upcoming South Korea-Asean summit.

The Blue House appeared to be in shock. It remained silent for hours after the KCNA report. It is considered a diplomatic discourtesy to reveal the contents of a personal letter sent by a state leader.

Presidential spokeswoman Ko Min-jung confirmed later in the evening that Moon sent the letter on Nov. 5 inviting Kim to the summit.

“The government believes that the leaders of the two Koreas must meet as often as possible in order to work together for inter-Korean cooperation and peace and win the international community’s support. That position remains unchanged, Ko said.

“It is very unfortunate that Kim cannot utilize the opportunity to meet with the 10 Asean leaders and Moon.”

The Moon administration appeared to have not abandoned its hopes for a Kim visit until recently. Earlier yesterday morning, in an interview with TBS, Vice Foreign Minister Lee Tae-ho said he hoped Kim would participate in the summit. He said the South had completed all preparations if Kim made a last-minute decision.

Tak Hyun-min, a presidential adviser who orchestrated the planning for the summit, told YTN on Monday that he had completed preparations for Kim’s possible participation.

In the lengthy report on Thursday, the KCNA used harsh rhetoric to criticize the South for trying to stage a political show of an inter-Korean summit in front of foreign leaders who have no interest in the two Koreas’ future. It said Pyongyang had no intention to fall for Seoul’s “impure” attempt to link inter-Korean relations with Moon’s “New Southern Policy” by pretending as if the leaders of the two Koreas are still on speaking terms.

The North said Kim had no intention of shaking hands and standing for photo ops at an irrelevant international conference. It was better to not have another inter-Korean summit because none of the agreements made between Kim and Moon during the past summits was realized, the North said.

Pyongyang also criticized top officials in the Moon administration for having failed to make a reasonable, realistic approach. “If children mulled over piling up eggs on a horn, it can be ascribable to their innocence,” the North said. “But, now that those taking the helm of South Korea set themselves to meditating on how to draw a picture on water ... how can the North-South relations be improved?”