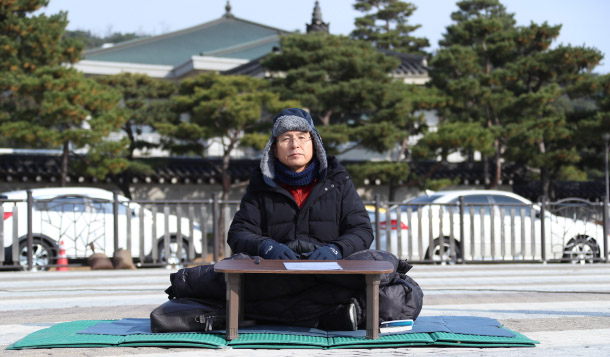 Hwang Kyo-ahn, chairman of the Liberty Korea Party, stages a hunger strike near the Blue House on Thursday. [LIM HYUN-DONG]

Hwang started the hunger strike Wednesday afternoon after holding a press conference to announce his demands. “I demand President Moon to recant his decision to end the Korea-Japan General Security of Military Information Agreement [Gsomia], to give up the bill to establish a new investigation agency for senior public servants and the bill to introduce a new proportional representation system,” he said.

The press conference was held in front of a fountain outside the Blue House. Hwang sat on the ground in the public plaza, where he had shaved his head in September in an anti-government protest, and started his hunger strike.

Later Wednesday evening, Moon sent Senior Secretary for Political Affairs Kang Ki-jung to dissuade Hwang. After their brief meeting, Kang told reporters that he appealed to Hwang that the issues he is protesting cannot be resolved through a hunger strike of the opposition leader.

Hwang, however, left his hunger strike venue outside the Blue House later in the evening, as the Presidential Security Service stopped the LKP officials from erecting a tent for his overnight stay. Around 8:30 p.m., Hwang headed to the National Assembly, where the LKP built a tent in front of the main building. He spent hours there and came back to continue his hunger strike outside the Blue House around 3:30 a.m. on Thursday.

Wearing a black padded coat and a hat, Hwang sat back down. A small desk was placed in front of him.

“I must fight fiercely,” he told reporters. “I must deliver my voice from the closest location to the Blue House.”

Later on Thursday morning, Hwang hosted an outdoor Supreme Council meeting of the LKP in front of the Blue House.

“I will continue my hunger strike with the belief that you will survive if you fight with a determination to die,” Hwang said. “Many people have shown support and I am very grateful.”

“The scheduled termination of Gsomia is imminent, and I could not wait any longer,” he also said. As of now, the agreement is scheduled to end as of tomorrow.

Other members of the LKP Supreme Council who attended the morning meeting also demanded the Moon administration to reverse its decision. “Information collected through Japan’s assets such as six Aegis-class ships, four ground radars, 17 early warning aircrafts and 77 maritime patrol planes are exchanged with Korea’s information collected by interviewing defectors and eavesdropping communication at the inter-Korean border,” said Rep. Cho Kyoung-tae. “Scrapping this agreement solely based on anti-Japan sentiment is an act of undermining our national security.”

The National Security Council’s (NSC) routine Thursday meeting also discussed the scheduled termination of Gsomia. In a brief statement released after the meeting, the NSC said its members reviewed the government’s diplomatic efforts to resolve the outstanding issues between Korea and Japan and agreed to maintain close cooperation with concerned countries. They also discussed measures to counter various possible outcomes in the aftermath of the termination, it said.

While President Moon remains adamant that Gsomia should be terminated unless Japan lifts its export regulations, top U.S. officials have recently visited Seoul and strongly demanded that it be kept.

Kim Hyun-chong, deputy head of the NSC, reportedly visited the United States this week, and the outcome of his trip was also expected to have been discussed.

The NSC’s Thursday’s meeting is usually held in the afternoon, but the latest conference took place in the morning. It appeared that the changed scheduling was to accommodate the participation of Foreign Minister Kang Kyung-wha, who attended a National Assembly hearing later in the day.

When she addressed the lawmakers of the Foreign Affairs and Unification Committee in the afternoon, Kang said the Moon administration’s stance remains the same.

“Will Gsomia end tomorrow as scheduled?” Rep. Won Yoo-chul of the LKP asked Kang. “Unless Japan changes its attitude, it will,” she answered.

She also dismissed some lawmakers’ arguments that the decision should be postponed to allow Seoul and Tokyo time for further negotiations. “Japan’s export control was clearly an unfair, retaliatory measure to harm trust,” she said. “Without Japan’s change, we cannot reverse this difficult decision.”