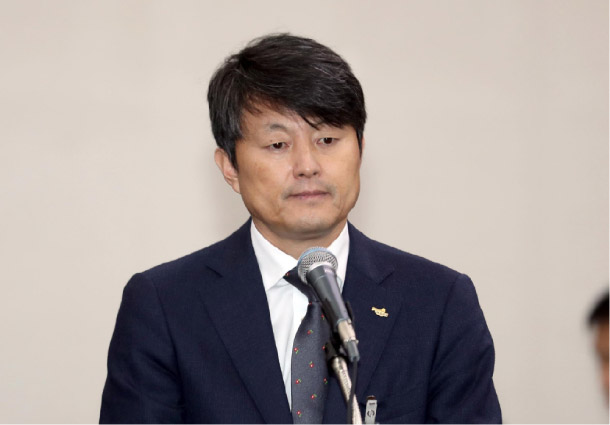 Busan’s vice mayor for economic affairs, Yoo Jae-soo, was summoned by Seoul prosecutors Thursday on allegations he received at least 30 million won ($25,500) worth of bribes.

The suspicion was first raised nine months ago by Kim Tae-woo, who worked for the Seoul Central District Prosecutors’ Office as an investigator before he was temporarily dispatched to the Blue House in July 2017 to serve in the special inspection bureau.

The bureau’s job was to monitor top Blue House officials tapped by President Moon Jae-in, as well as the president’s family, for possible corruption.

In November 2018, the Blue House fired Kim after accusing him of interfering in a police investigation. The president’s office sent him back to the Seoul Central District Prosecutors’ Office and asked prosecutors to punish him.

Kim then began leaking details of his time at the Blue House to the local press, claiming he was ordered to spy on private citizens and that Moon’s top aides tried to cover up alleged corruption by powerful figures - including Busan Vice Mayor Yoo.

The prosecution fired Kim in January, and the whistle-blower has since vented his frustration against the Moon administration through his own YouTube channel, which now has nearly 459,000 subscribers.

In February, Kim filed a complaint with the prosecution against Cho Kuk, who at the time was serving as Moon’s senior secretary for civil affairs, accusing him of dereliction of duty in the Yoo case. The special inspection bureau Kim worked for was led by Cho, and Kim claimed Cho ordered the cover-up of Yoo’s bribery allegations.

Yoo was finally summoned as a suspect by the Seoul Eastern District Prosecutors’ Office on Thursday at around 9:15 a.m. on charges of violating the Act on the Aggravated Punishment, etc. of Specific Crimes by receiving at least 30 million worth of bribes.

Prosecutors are planning to dig into the bribery allegation first, and then figure out whether the Blue House really tried to cover up the suspicion when it was first raised two years ago, as Kim claims - and whether Cho had any role in that shady scenario.

According to Kim, the Blue House was first aware of the bribery allegations against Yoo in late 2017, when Kim’s colleague in the special inspection bureau was tipped off from an unidentified source. His colleague shared that information with other members in the bureau. Yoo was head of the Financial Policy Bureau of the Financial Services Commission at that time.

An investigation on Yoo opened, but for some unknown reason, Kim said, “there was an order from above” to halt the probe. Yoo was never penalized, and he went on becoming Busan’s vice mayor from July 2018.

In the past weeks, prosecutors summoned numerous businessmen who gave extravagant gifts to Yoo, but all are known to have denied the bribery allegations, saying they were purely gifts for a long-time friend.