‘Parasite’ is a big winner at Blue Dragons

‘Parasite’ is a big winner at Blue Dragons 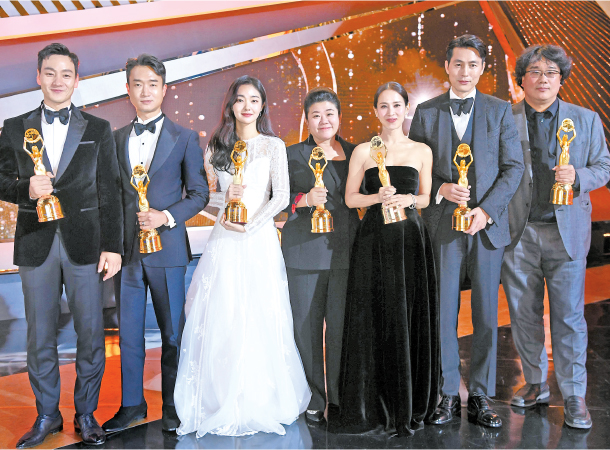 Palme d’Or winner “Parasite” took home Best Picture at the 40th Blue Dragon Film Awards, and out of 18 awards, the film and its actors were nominated in 11 categories and took home a total of five at the award ceremony held at Paradise City hotel in Incheon on Thursday evening.

Praised by critics worldwide for sharply pointing out the disparities between the rich and the poor through two families’ stories, the film was dubbed the film of the year and has been invited to multiple international film events.

“It’s my first time to receive Best Director at the Blue Dragon Film Awards,” said Bong in his acceptance speech. “It is an award I’ve been wanting to receive. I will continue to be a creative ‘parasite’ in Korean cinemas and forever live off the local film industry as a creator.”

Best Actress went to actor Cho Yeo-jeong for her role in “Parasite.”

“I don’t know when, but at some point [in my life] I came to accept acting as a presence that I will always have a crush on,” Cho said as she accepted the award. “I’ve been acting with a mindset that I could always be cast out and thought I could never be loved back. In some way, that was my motivation. But I’m not going to think my love was realized through this award. Even though it may seem like a cliche thing to say, I will silently go on my way. I will love [acting] as passionately as I do now.”

Jung Woo-sung received Best Actor for “Innocent Witness.” Best Supporting Actor went to Jo Woo-jin for “Default,” which depicts the 1997 Korean Financial Crisis and focuses on a clash between those struggling to protect their own interests and others working toward a just cause. Lee Jung-eun went home with Best Supporting Actress for her outstanding performance in Bong’s film.

Other winners include director Lee Sang-geun, who was awarded Best New Director for the comedy-apocalypse film “Exit” and Best Screenplay went to director Kim Bo-ra for “House of Hummingbird,” which swept numerous international film festival awards over the year for tenderly depicting a 14-year-old girl’s coming-of-age based on a real tragedy - the collapse of the Seongsu Bridge in 1994.

The ceremony also brought out stars that haven’t been seen in a while. Actor Kim Woo-bin was the presenter of the award show, marking his first public appearance after a two-year and six-month hiatus. The actor was diagnosed with nasopharyngeal cancer in May 2017, and he stepped out of the spotlight to focus on his treatment and recovery.

Another familiar face who attended the event as presenter was actor Lee Young-ae, who has recently returned to the entertainment world after a 14-year hiatus. The actor will appear in the upcoming film “Bring Me Home,” which arrives in theaters on Nov. 27.

The Blue Dragon Film Awards chooses the nominees from films released from Oct. 12, 2018 to Oct. 10 this year based on a survey of industry insiders. The final winners are chosen by eight judges and online votes from movie fans.