SK Biopharmaceuticals has become the first Korean company to earn an approval from the U.S. Food and Drug Administration (FDA) on its own, as its treatment for partial-onset seizures in adults just got the green light from the regulator.

The approval provides a boost for the company’s plan for an initial public offering (IPO) slated for later this year and is a rare win for a biopharmaceutical industry that has been struggling from a series of failures. 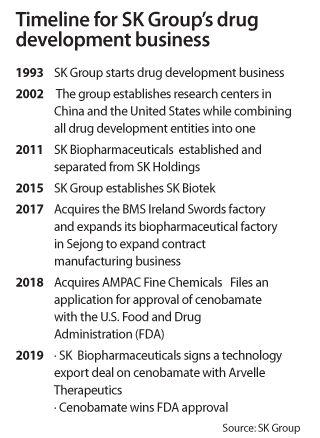 The company announced Friday it had received FDA approval to sell Xcopri, cenobamate tablets, in the United States. The company is planning to meet with the U.S. Drug Enforcement Administration within the next 90 days to discuss next steps, as it seeks to start selling the anti-epileptic drug in the country starting in the second quarter of next year.

Analysts expect Xcopri will generate around 1.1 trillion won ($934 million) in sales per year if the drug takes 5 percent market share.

According to GlobalData, a total of 2.86 million people suffer from partial-onset seizures in the United States, and that number is expected to rise 0.8 percent per year on average. For that reason, the market researcher projects the market for anti-epileptic treatments will grow 2.1 percent on average every year to grow from $4.9 billion this year to $5.9 billion by 2026.

“Today’s approval is a major step toward our goal of becoming a fully-integrated global pharmaceutical company that can discover, develop and deliver new treatment options in epilepsy and central nervous system disorders,” said Cho Jeong Woo, president and CEO of SK Biopharmaceuticals and its U.S. subsidiary SK Life Science, in a statement.

“We are grateful to the thousands of participants in our trials, clinical investigators, partners in the epilepsy community and our employees for their important contributions in bringing forward this treatment option for adults with partial-onset seizures.”

The SK Holdings subsidiary successfully completed Phase 3 clinical trials for the anti-epileptic drug candidate in February and filed a new drug application to the FDA shortly after.

SK Biopharmaceuticals said the FDA granted the approval based on how Xcopri noticeably reduced seizure frequency compared to a placebo, with some even achieving zero seizures, at all doses during the two global, randomized, double-blind and placebo-controlled studies. The drug also proved its safety, with no serious adverse effects on patients reported during a global-scale open-label safety study, the company added.

The U.S. regulator’s approval is expected to positively affect plans for an IPO in Korea by the end of this year.

Investor expectations were already high for the company’s stock sale, as it was one of the very few biopharmaceutical companies to have successfully completed Phase 3 clinical trials for a candidate drug.

They estimated SK Biopharmaceuticals could achieve a market capitalization of more than 5 trillion won in market capitalization on the basis of Xcopri winning FDA approval. The company signed a deal worth up to $530 million in February to export technologies related to cenobamate to Switzerland-based Arvelle Therapeutics.

The FDA approval for SK Biopharmaceuticals is also a major win for the Korean biopharmaceutical industry, which has been suffering a series of failures related to Phase 3 clinical trials.

Investor sentiment has steadily fallen throughout the year after a number of biopharmaceutical companies, such as Helixmith and SillaJen, failed to complete trials. The industry was also shaken after the Ministry of Food and Drug Safety pulled the license for a highly controversial gene therapy drug Invossa.