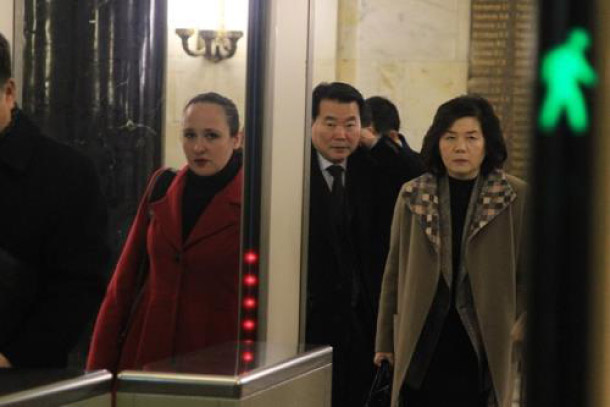 According to the Russian Foreign Ministry, the two sides discussed on Wednesday the “present circumstances and prospects of bilateral cooperative development” and other key regional and international issues in the first strategic dialogue held between them since North Korean leader Kim Jong-un’s first summit with Russian President Vladimir Putin in Vladivostok, Russia, last April.

Ahead of the talks with Vladimir Titov, Russia’s First Deputy Foreign Minister, and Oleg Burmistrov, Russia’s ambassador at large, in which the two sides agreed to “strengthen strategic cooperation,” Choe met with Russian Foreign Minister Sergei Lavrov, with whom she discussed developing a “new golden age” of North Korea-Russia relations, according to an English-language report the North’s official Korean Central News Agency released.

On Thursday, Choe visited the Russian Defense Ministry for talks with Russian Deputy Defense Minister Alexander Fomin - a meeting that was believed to lay the groundwork for a visit by Russian Defense Minister Sergey Shoygu to North Korea in the near future. In April, No Kwang-chol, minister of the North’s People’s Armed Forces, met Shoygu on the sidelines of an international security forum in Moscow to coordinate their first bilateral summit that month.

Choe’s high-profile visit to Russia comes at a time when tensions remain high over the future of stalled denuclearization negotiations between North Korea and the United States.

On Wednesday, Choe herself echoed remarks from several senior North Korean officials in recent days by saying Pyongyang had no interest in resuming denuclearization negotiations - much less a summit or high-level talks - with Washington unless the United States lifts its “hostile policy” toward the North.

“I have no message [to give to the United States],” Choe said, “But it is my thought that discussions related to nuclear issues are probably no longer on the table from now on.”

As was interpreted with the Kim-Putin summit in April, which took place just two months after the North’s second summit with U.S. President Donald Trump flopped in Hanoi, Vietnam, in February, Choe’s trip may be an attempt to elicit Moscow’s support in the nuclear talks and affirm their strategic partnership in case the negotiations completely sour.

Russia appeared to demonstrate its willingness to play the role of a conduit of sorts when Lavrov brought up North Korea in his talks with U.S. Deputy Secretary of State John Sullivan on the sidelines of the Group of 20 foreign ministers’ conference in Nagoya, Japan, on Saturday, according to the U.S. State Department’s spokesperson.

Testifying to Russia’s continued attempt to exert influence over the ongoing negotiations, Lavrov said at a nonproliferation conference in Moscow on Nov. 8 that it was the U.S. approach to denuclearizing North Korea “all at once” that was responsible for the enduring stalemate - effectively taking the side of Pyongyang in calling for “reciprocal steps” toward an agreement.

Russia, along with the North’s main ally China, has also been a consistent supplier of the North’s energy needs, supplying Pyongyang with 2,136 tons of refined oil in September, according to its report to the United Nations Security Council. From January to September, Pyongyang imported a total of around 301,795 barrels of refined oil from the two countries - around 60 percent of the yearly limit of 500,000 barrels it is allowed to buy abroad set by UN sanctions on the country, Voice of America reported.