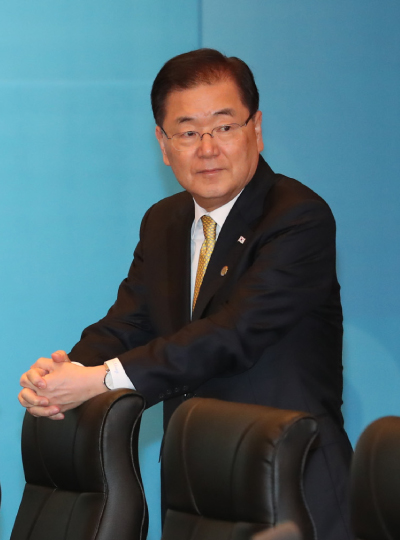 Korea and Japan remained at loggerheads Monday, as top officials from both sides continued to quarrel about last week’s agreement to suspend the ending of a bilateral military intelligence-sharing pact and start trade talks.

“Blue House National Security Office Director Chung Eui-yong revealed [Sunday] that Korea received an apology from Japan after lodging a complaint about its distorted announcement on the two countries’ agreement to suspend the termination of the Gsomia [General Security of Military Information Agreement],” Yoon Do-han, senior presidential secretary for public communication, said in a statement on Monday. “But the Yomiuri Shimbun reported this morning that Japan denied it, quoting an anonymous Japanese Foreign Ministry official.”

“I want to make clear once again,” Yoon said. “We complained to Japan, and Japan apologized.”

Yoon also said the Korean government never received any complaint from the Japanese government about Chung’s remarks, criticizing media for fueling issues with false reports. “If Japan had not apologized, it would have protested through an official channel,” Yoon said.

Yoon’s statement on Monday was the latest in a series of top Korean officials’ attacks on Japan in regards to its provocative way of publicizing the latest developments between the two countries. On Friday, Korea announced that it will suspend its decision to withdraw from Gsomia with Japan, backpedaling on its earlier announcement that it will terminate the agreement due to Tokyo’s export restrictions against Seoul. Korea also said it has decided to tentatively halt its petition procedures against Japan at the World Trade Organization (WTO), which were in response to Tokyo’s export curbs, while the two countries hold talks on export management policy.

In a separate press briefing held around the same time on Friday, Japan’s Ministry of Economy, Trade and Industry said Tokyo will not curb its strengthened controls on exports to Korea and that Seoul was still removed from its so-called white list of trusted trading partners. It said Korea and Japan will resume policy dialogue on trade management to address the issue. The last such talks took place in June 2016.

Following the announcements from Seoul and Tokyo, foreign ministers of the two countries met on Saturday and discussed a possible summit between President Moon Jae-in and Japanese Prime Minister Shinzo Abe on the sidelines of a Korea-China-Japan summit next month. Hope grew briefly for a possible breakthrough of the strained bilateral relations, but the mood changed quickly on Sunday as Seoul and Tokyo started a public relations war.

Tokyo officials told Japanese media that Japan has won a victory against Korea. The Asahi Shimbun reported Sunday that Abe told his aides on Friday after Korea’s announcement that “Japan hasn’t yielded in any way” and that Korea “gave in because the United States is strong.”

The Blue House responded with disdain. In response to Abe’s claims, a senior presidential aide said Sunday it would be “extremely disappointing” if the report were true and questioned “if the leader of Japan could make such remarks with good conscience.”

In a lengthy briefing in Busan, where Korea is hosting the special summit with the Association of Southeast Asian Nations (Asean), National Security Office Director Chung also harshly criticized Japan. “I have to express serious disappointment at several aspects of Japan’s behavior before and after the recent agreement between Korea and Japan was announced,” Chung said. “If this behavior is repeated, it could make progress in future negotiations very difficult.”

Chung said Japan agreed to make a simultaneous announcement on the agreement at 6 p.m. on Friday, but leaked some details to media earlier in the day, while making the official announcement seven minutes later than the agreed time.

Chung also said Japan approached Korea first after Seoul made a decision to terminate Gsomia in August, dismissing Tokyo’s argument that the two countries started talks because Korea halted its petition in the WTO.

Chung dismissed the Japanese Ministry of Economy, Trade and Industry’s announcement that there will be no change in its export controls. “Its announcement [on Friday] intentionally distorted or exaggerated specifics of the agreement,” Chung said. “If those were Japan’s terms during the negotiation, there would have been no agreement.”

Chung said Korea, through a diplomatic channel, pointed out the distortions to Japan and lodged a strong complaint. “The Japanese side said, ‘We understand Korea’s points. We offer an apology for the exaggerated announcement by the Ministry of Economy, Trade and Industry’,” Chung said.

He also warned that Korea’s decisions to suspend the Gsomia termination and halt its petition procedures against Japan at the WTO are not final and can be reversed. “I want to emphasize once again that they are all conditional and tentative,” Chung said.

“From now on, everything depends on Japan’s attitude,” Chung continued. “I want to tell Japan, you try me.”

Japan, then, responded by denying the top Korean officials’ press briefings. Quoting an anonymous Foreign Ministry official, the Yomiuri Shimbun reported Monday morning that Japan had not apologized, denying Chung’s remarks. Shortly after the report was published, Yoon issued a statement to stress that Korea did complain and Japan did offer an apology.

The public relations war escalated further later in the day as Japanese Chief Cabinet Secretary Yoshihide Suga dismissed Korea’s position that it had received an apology from Japan.

“It is unproductive to comment on every single remark by Korea,” Suga said during a routine press briefing on Monday, when a Japanese reporter asked if Tokyo had apologized to Seoul. “Anyways, there was no apology offered from the government.”

Asked about the Korean government’s position that Japan will ease tightened export regulations, Suga also maintained Japan’s earlier stance. “Reviewing export controls is to properly operate the export management system,” he said. “It has nothing to do with Gsomia.”

“Because we were informed [by Korea] that the WTO process will be halted, relevant authorities between the two countries will have talks,” he said. Asked if the export controls will continue, Suga replied, “As I have said.”