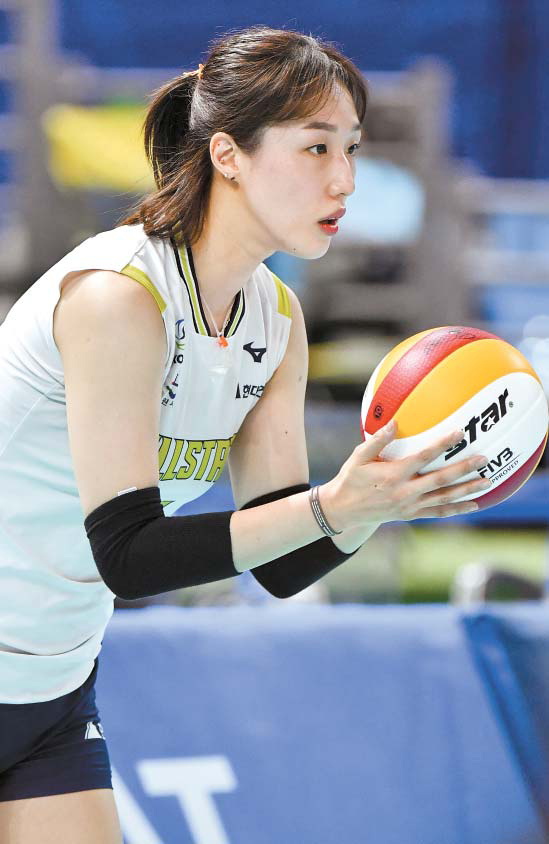 Hwang Youn-joo of Hyundai Engineering & Construction Hillstate was once one of the greats of Korean volleyball, but this year, things have started to slow down.

At age 33, Hwang has spent most of this year warming the bench, waiting for an opportunity to be substituted into the game. Despite the limited playing time, Hwang is still competing for her spot on the court.

Throughout her career, Hwang has won five championship titles and, in 2017, she became the first player in either the men’s or women’s KOVO to score 5,000 career points. Combining both regular and postseason points, Hwang is now getting closer to 6,000. Although she is dominant in the women’s league in terms of her career record, starting last season, she is no longer as threatening on the court.

After a knee surgery in 2007 and a major finger injury in 2012, Hwang’s performance started to go downhill. Making matters worse, her performance decreased as she got older. Due to this, during the 2018-19 season, Hwang lost her spot in the starting lineup.

To replace Hwang, the club signed a new foreign opposite hitter, Milagros Collar, registered in the KOVO as Maya. While Maya played as the club’s opposite, head coach Lee Do-hee tried to assign Hwang as outside hitter, but the change in position didn’t work. Since Hwang was an offensive player throughout her career, she struggled significantly with defense. As a result, Hwang played as Maya’s backup.

Throughout the 2018-19 season, Hwang played as a substitute in 20 out of 30 games and only scored 160 points, about eight per match. Looking at her past seasons, Hwang was always named in the top 10 in terms of scoring, but last season she fell to 25th.

This season, things are looking worse. As of Tuesday, Hwang has played in five matches for the Hillstate as a substitute, scoring 20 points.

During a match against the Industrial Bank of Korea Altos on Nov. 19, Hwang appeared from the first set instead of Maya. Up until the second set, Hwang scored five points, but in the next two sets she only got three. As the Hillstate allowed the Altos to tie the set score at 2-2, Lee was given no choice but to take Hwang out of the game.

“Since I wasn’t jumping for a while, it felt like my brain was shaking,” Hwang said. “While the starting players trained for actual matches, I’ve only done personal training, focusing on rallies. I lost my sense [of play] for actual matches.”

Since she made her debut in KOVO, Hwang has always been on the starting roster and trained with the starting team. This past off-season was the first time she found herself having to manage her own preparation.

“After I became a backup, I started to feel how the [bench] players felt,” Hwang said. “From the bench, I could see the areas where I struggled, but once I got on the court, nothing worked.”

Despite her poor performance, Hwang is expected to make more appearances for the Hillstate as Maya’s knee is not in the best condition. Rather than the excitement of playing in more matches, Hwang is more concerned about the Hillstate.

“Maya’s recovery is our priority,” Hwang said. “Fulfilling a foreign player’s position is only possible if it’s only for a match or two. I’ll hang in there until she gets back.”

Once the 2018-19 season ended, Hwang re-earned her free agent status and signed a one-year contract with the Hillstate at 100 million won ($85,000). When this season ends, it’s not clear what happens next. As she will be 34 next season, Hwang may be considered too old to continue playing, but she isn’t ready to leave.

“I don’t want to be silently forgotten,” Hwang said. “Before I retire, I’ll show [the fans] who I am as a player.”

Hillstate will continue its season against the GS Caltex Seoul Kixx today in Suwon, starting at 7 p.m.