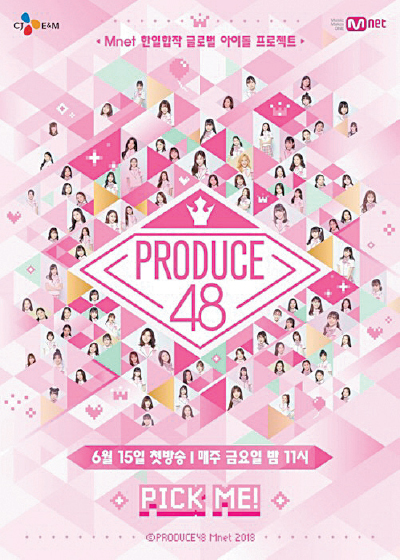 Viewers are accusing employees of “Produce 48,” the third season of the troubled “Produce 101” audition series, of fraud and obstruction of business.

A group of “Produce 48” viewers calling themselves the truth investigation committee sued the show’s producers and officials from related entertainment agencies for fraud and reported them to the Seoul Central District Prosecutors’ Office for obstructing business and taking bribes on Tuesday, said Mast Law, the group’s legal representative.

“Since ‘Produce X 101’ producers Ahn Joon-young and Kim Yong-bum were arrested on Nov. 5, Ahn has admitted to manipulating earlier seasons,” Mast explained. “As viewers who loved ‘Produce 48’ and participated in paid voting, the truth investigation committee is very angered and has decided to sue [the producers] to find out the truth.”

The committee is further pushing for Mnet to reveal the number of actual votes that contestants of “Produce 48” received.

“Produce 48” is the third Mnet audition show to have a group of viewers form a so-called truth investigation committee and sue the producers, following “Idol School” and “Produce X 101.”

“Produce X 101” producers Ahn and Kim, who face charges of fraud and taking bribes, were referred to prosecutors on Nov. 14 after arrest.

Mnet announced Tuesday that IZ*ONE, the group formed out of “Produce 48,” will not participate in the 2019 Mnet Asian Music Awards in Nagoya on Dec. 4 as had been planned before.