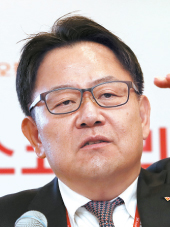 SK Biopharmaceuticals will target the U.S. market in the second quarter of 2020 with its treatment for partial-onset seizures in adults with epilepsy, the company announced on Tuesday.

Instead of forging partnerships with local drug makers for the sale of Xcopri, the anti-epileptic drug that recently earned a key approval from the U.S. Food and Drug Administration (FDA), marketing will be handled by the company’s Paramus, New Jersey-based subsidiary.

SK Life Science will be in charge of sales in the United States, hiring over 100 sales representatives and directors.

“If we partner with a local company, we will have to divide the profits,” said Cho Jeong-woo, CEO of SK Biopharmaceuticals.

“Considering the nature of the treatment’s offering, it can be distributed across the United States with a relatively small number of salespeople,” he said.

Treatments for epileptic seizures can be prescribed by doctors with specific training in diagnosing and treating neurological disorders.

SK Biopharmaceuticals is also eyeing Korea, China and Japan as the next target markets with the goal of establishing its own independent sales and distribution networks.

In the case of the European region, it has turned to Zug, Switzerland-based Arvelle Therapeutics to develop and commercialize the cenobamate tablets.

The CEO said that other compounds in the pipeline are in development for the treatment of central nervous system disorders, including epilepsy.

The development of an anti-cancer treatment is also underway.

“We will keep expanding our pipelines to develop anti-cancer drugs,” Cho said, “We are actively looking for cooperation and partnership in that area,” he said.

The company is on track to take itself public as it filed an application for an initial public offering on the Korea Exchange last month.

Market analysts estimate the pharmaceutical unit’s valuation at 5 trillion won ($4.3 billion) to 10 trillion won, marking one of the largest offerings next year.

The moves came after the FDA approved Xcopri. The regulator noted that the drug reduced the frequency of seizures during clinical trials.

“During the trials, doses of 100, 200 and 400 milligrams daily of Xcopri reduced the percentage of seizures per 28 days compared with the placebo group,” the regulator said in a statement. The company is planning to meet with the U.S. Drug Enforcement Administration in the next 90 days to discuss next steps.