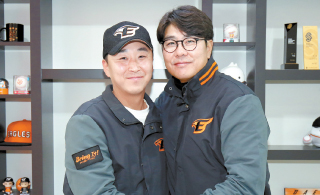 Jung Woo-ram, left, and Hanwha Eagles general manager Jeong Min-chul pose for a photo after Jung signed a four-year contract at 3.9 billion won (＄3.3 million) with the Eagles on Wednesday.

“Over the past four years, I had a great time with Hanwha’s passionate fans and players,” Jung said. “In my remaining time as a baseball player, I’ll try my best in showing great performance, wearing the Hanwha Eagles uniform. I’ll also fulfill my role as a veteran player by leading the young players to help the team move a step forward.”

Jung made his KBO debut with the SK Wyverns in 2004. After playing for the Wyverns until the 2015 season, Jung signed his first ever free agent contract with the Eagles, a four-year contract at 8.5 billion won.

Throughout four seasons, Jung lived up to that paycheck by picking up 23 wins, 15 losses, 1 hold and 103 saves with a 2.79 ERA throughout 251 and one third innings. In each of his four seasons with the Eagles, he played in at least 55 games and tossed more than 50 innings.

In 2018, Jung won the league’s saves title by picking up 35 saves and helped the club advance to the postseason for the first time in 10 years.

Although he wasn’t given as many opportunities this season, the 34-year-old still managed to pick up four wins, three losses and 26 saves with a 1.54 ERA throughout 57 games.

As the Eagles finally got to finalize their contract with Jung, they will now be focusing on re-signing their other free agents, rather than signing a new free agent. The Eagles have a total of four free agents this year.

With Jung’s signing, four out of 20 free agents have signed contracts for the 2020 season. This season, the free agent market is a lot quieter than the previous years as there aren’t any big name players and they tend to be older. The majority of the free agents this year are in their mid-30s, with the exception of the LG Twins’ Oh Ji-hwan and the Kia Tigers’ An Chi-hong and Kim Sun-bin, who are all 29 years old. None of the three infielders have signed contracts yet.

Due to this, the clubs are fulfilling their needs through the second round drafts, trades or signing players that have been released from other clubs.