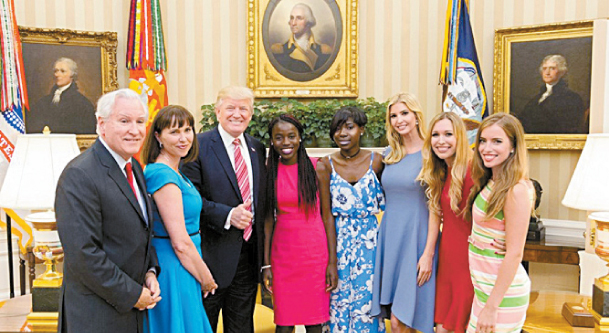 Doug Wead, far left, and his family pose at the White House after an interview with U.S. President Donald Trump, third from left. Ivanka, Trump’s daughter and his senior adviser, stands third from right. [DOUG WEAD]

Doug Wead, who interviewed U.S. President Donald Trump before releasing a book on the president’s life in the White House Tuesday, recently told the JoongAng Ilbo that North Korean leader Kim Jong-un showed “a desire to end” the 1950-53 Korean War in a letter he sent to Trump ahead of their second summit.

The “tone” of the letter showed a desire to formally end the war, Wead told the JoongAng Ilbo’s Washington correspondent last Saturday in an exclusive interview, while elaborating on the moment Trump allowed him to read Kim’s correspondence earlier this year.

Wead, without getting into the details of the letter, citing confidentiality, said Kim had written that he was “open to discussing” a war-ending declaration.

The letter was hand-delivered to Trump by Kim Yong-chol, the vice chairman of the North’s ruling Workers’ Party’s Central Committee, in the White House on Jan. 18, a month before the two leaders met in Hanoi, Vietnam, on Feb. 27-28 for their second summit.

The summit eventually ended with no deal, and Trump later cited Pyongyang’s demand for Washington to remove sanctions on the regime before its complete denuclearization as the main reason why the talks floundered.

The most recent known time that the war-ending declaration was brought up was last month, when U.S. nuclear envoy Stephen Biegun led an American delegation to Stockholm for a working-level meeting with the North.

According to multiple sources in Washington who spoke with the JoongAng Ilbo last month, Biegun proposed to the North the setting up of a North Korean and U.S. liaison office, a declaration to end the war and humanitarian aid, in return for the freeze of nuclear materials and measures beyond the dismantling of the North’s Yongbyon nuclear complex.

That meeting also ended fruitlessly, with Pyongyang later dismissing it as a “waste of time,” presumably because there was no mention on Washington’s side of any sanctions relief.

During the interview with the JoongAng Ilbo, Wead talked about Kim’s letter to Trump and what the White House chief thinks of the young North Korean ruler. Wead’s book, entitled “Inside Trump’s White House: The Real Story of His Presidency,” was released this week.

The following are edited and condensed excerpts of the interview. 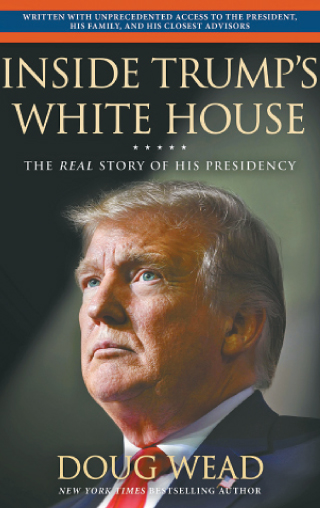 Wead’s “Inside Trump’s White House: The Real Story of His Presidency” was released Tuesday. [DOUG WEAD]

Q. Tell me about the letter and how you were able to read it.

A. In January of 2019, that’s when the president brought me in. And when I came into the Oval Office, he was standing there with Sarah Huckabee Sanders [then-White House press secretary] and Bill Shine [then-White House deputy chief of staff for communications]. And as I walk in, the president doesn’t shake hands and doesn’t say hi. As soon as I come in, he’s holding these papers up above his head and says, “This is my private correspondence with Kim Jong-un. And I’m going to let you read it.” And it was almost like I’m a little puppy dog and he’s holding up a treat here, saying “Jump, jump, jump.” That’s the sort of thing I was feeling. And he’s like, “They don’t want you to have this. They told me not to let you have this, but I’m going to let you have this.” The president said, “You can read it. You can’t have it. You can’t take pictures of it, but I’m going to let you read this correspondence.” And that’s how it began. It was very fascinating. I think the reason he wanted me to see them was because he knew this would be a book about the history of his presidency. And he felt this was the biggest problem he faced as president and was taking it on.

What was the letter about?

I wasn’t allowed to take any notes or anything, but the president arranged for me to have a separate room and to take my time to read through them. I’m not supposed to reveal the details of the letter, but it just seemed to me that, in both reading the letter and in talking with the president, he and Chairman Kim want to make history together. They want to change things. They want to do something. And also the tone of the letter showed a desire to end the Korean War. To formally end it.

Did Kim suggest to Trump they end the war?

He [Kim] was open to discussing that.

In 2017, Trump described Kim as “short and fat” and called him “Little Rocket Man.” Now, it appears Trump thinks differently about Kim. Do you know if he does?

How Trump thinks of Kim? He likes him. He doesn’t like the Otto Warmbier story. But he does like him as someone who can help solve one of the world’s greatest problems. And he understands Kim’s need. He understands why Kim feels he needs nuclear weapons and why Kim feels he can’t trust Western powers.

What does Trump think of South Korean President Moon Jae-in?

Well, he likes President Moon. I asked him about many world leaders, and he had some pretty sharp things to say about some of the heads, but not with President Moon at all.

If you could describe Trump in one word, what would that be?

A great personality. A big thinker. Those are two words. But he’s a big thinker. He goes for the big solution. He’s not afraid.