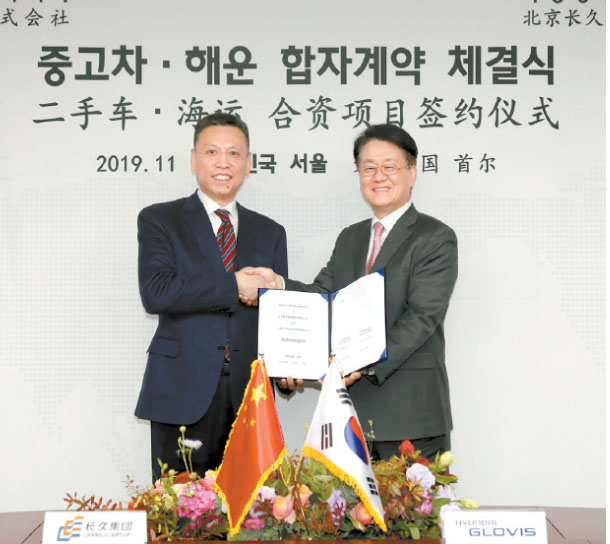 Hyundai Glovis is establishing two logistics joint ventures in China to bolster its presence in the country.

The Korean logistics company inked a partnership with China’s vehicle sales and logistics service provider Changjiu Group at its Seoul headquarters on Thursday to found two joint ventures. Among the two joint ventures, one will be dedicated to selling used cars in China while the other will focus on shipping new cars produced in China to export markets.

The used car sales venture will be a joint venture between the Korean company’s Beijing unit, Beijing Glovis and Changjiu Automotive, a subsidiary under the Chinese group. The shipping joint venture will be formed between Beijing Glovis and Beijing Changjiu Logistics, another subsidiary under the Chinese group.

The Hyundai affiliate did not disclose how much or what portion each company is paying to establish the joint venture, citing a confidentiality agreement.

According to the Hyundai unit, China’s used car trading market has been showing steep growth recently, expanding at an average 15 percent every year.

The joint venture, tentatively named Beijing Changjiu Glovis Automobile Service, will first test its business in Guangxi, an autonomous region in southern China where Changjiu Automotive’s dealer network is concentrated, from next year.

The shipping joint venture will focus first on exporting cars produced in China to Southeast Asian countries. The new venture will start by delivering cars between China, Korea, Hong Kong and the Philippines from next year and then expand to Thailand and Indonesia.

In the longer term, the shipping venture, tentatively named Shanghai Changjiu Glovis Shipping, plans to partner with the used car retailing venture to export used cars. According to Hyundai Glovis, exporting used cars used to be illegal in China, but in May the country’s government announced it will allow exports to invigorate the economy.