Hwang in hospital after hunger strike

Hwang in hospital after hunger strike 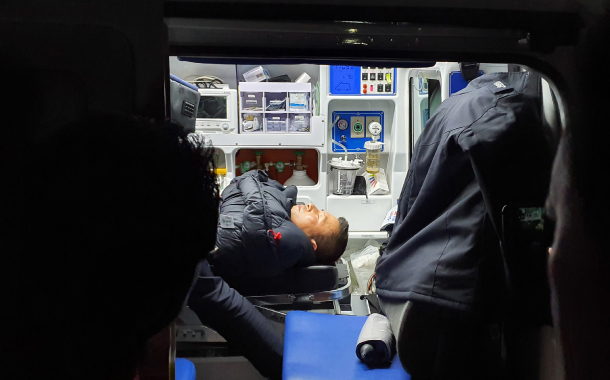 Hwang Kyo-ahn, LKP chairman, is transported via ambulance to Yonsei University’s Severance Hospital in western Seoul after he lost consciousness around 11 p.m. on Wednesday. [NEWS1]

The main opposition party’s leader Hwang Kyo-ahn regained consciousness Thursday, after he was hospitalized following an eight-day outdoor hunger strike against the government and the ruling party.

“He is getting better slowly,” Kim Do-eup, chief of staff of Hwang, chairman of the Liberty Korea Party (LKP), said Thursday. “Doctors said last night that his kidney could get worse, but he is recovering.”

The 62-year-old conservative politician started a hunger strike on Nov. 20 in protest of the Moon Jae-in administration’s plan to end a military information-sharing pact with Japan and the ruling Democratic Party’s plan to pass contentious bills. He was rushed to Yonsei University’s Severance Hospital in western Seoul when he lost consciousness around 11 p.m. on Wednesday, and regained consciousness around 12:50 a.m. on Thursday.

According to Kim, Hwang is insisting that he wants to continue his protest outside the Blue House, but his family is stopping him.

After holding a press conference to announce his demands on Nov. 20, Hwang sat on the ground in the public plaza in front of a fountain outside the Blue House and began his hunger strike. It was also the same place where he shaved his head in September in an anti-government protest.

“I demand President Moon Jae-in recant his decision to end the Korea-Japan General Security of Military Information Agreement [Gsomia], to give up the bill to establish a new investigation agency for senior public servants and the bill to introduce a new proportional representation system,” he said at the time.

The Presidential Security Service had stopped LKP officials from erecting a tent for Hwang’s overnight protest. For the first three days, Hwang staged his hunger strike outside the Blue House during the day and inside a tent outside the National Assembly building at night.

On Nov. 22, Kang Ki-jung, senior presidential secretary for political affairs, paid a visit to Hwang at around 5:55 p.m., five minutes before the government announcement to suspend the scheduled termination of Gsomia. Kang informed Hwang about the decision and relayed Moon’s message that he should stop his hunger strike.

Hwang, however, insisted that he will continue the protest, because only one of his three demands was met.

Starting Saturday, Hwang intensified his protest by ending the nightly commute to the National Assembly. A makeshift tent was created about 100 meters (328 feet) away from the Blue House for his overnight stay.

As he spent more time outside in the cold weather, his condition visibly deteriorated. Starting Sunday afternoon, Hwang mostly lay down inside the tent, unable to sit up. Prime Minister Lee Nak-yon visited him on Sunday and expressed his concerns about Hwang’s health conditions.

On Monday, Hwang posted a message on Facebook to say he will continue the hunger strike. “My body is weakened, but my mind became clearer,” he wrote. Later in the day, his counterpart, Democratic Party Chairman Lee Hae-chan, paid him a visit. Lee urged Hwang to stop his hunger strike and start negotiations.

The LKP erected a better tent for its chairman on Tuesday, and Hwang was moved there. He, however, refused his aides’ advice to go to the hospital. As his conditions weakened, the LKP readied doctors and an ambulance to prepare for an emergency.

On his eighth day of hunger strike on Wednesday, Hwang’s conditions rapidly worsened, and doctors examined him three times. LKP lawmakers said he was reaching a limit.

Around 11:07 p.m., Hwang was found unconscious by his wife and sent to the hospital.

Hwang’s doctor planned a media briefing at 11 a.m., but it was later canceled. “He is not in a critical condition, and there is no reason for a briefing,” a hospital official said.

Hwang was admitted to a VIP ward on Wednesday because there was no other room available, but the LKP said he will be moved to a single-bedded ward in the general facility later on Thursday. After Hwang was sent to the hospital, LKP Supreme Council members Shin Bo-ra and Chung Mi-kyung started hunger strikes in his tent outside the Blue House. The LKP held an emergency meeting of lawmakers in the morning. “The Moon administration and the ruling party are not responding to Hwang’s hunger strike in the cold weather. They are truly cruel,” Rep. Na Kyung-won, floor leader of the LKP, said.