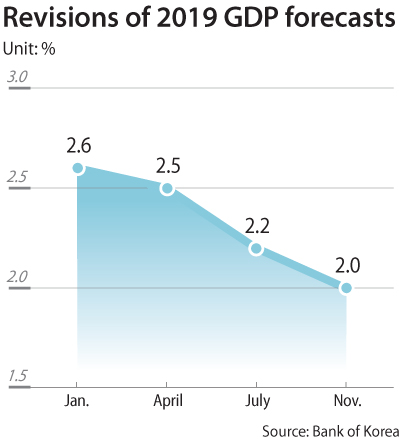 The central bank cut its 2019 growth forecast to 2.0 percent, from the previous 2.2 percent, but it said it would be leaving interest rates unchanged.

At its final meeting of the year, the Bank of Korea said that it wants to see the effects of the previous two cuts in the face of economic headwinds.

Governor Lee Ju-yeol said the estimate for full-year growth was cut due to weakness across the board.

“The projection was cut by 0.2 percentage points compared to July as sluggish recoveries in exports and investment and tepid domestic consumption weighed on the economy,” Lee said. He added that the Korean economy has hit the bottom.

The latest projection is on par with the predictions by the International Monetary Fund and the Organisation for Economic Cooperation and Development, but it is still higher than those of international financial institutions.

The economy grew at a slower pace than expected in the third quarter, expanding 0.4 percent between July and September compared to the previous quarter. With these numbers, at least 0.97 percent growth is needed in the fourth quarter to achieve 2.0 percent for the full year.

The central bank said that the government’s expansionary fiscal policy is likely to support the economy in the last quarter of the year.

“We’ve factored in the government’s efforts to act on the expansionary budget plan,” said Lee Hwan-seok, director-general at the bank’s research department.

The government’s outlook faces a slew of disheartening numbers.

Growth is seen as stronger going out - 2.3 percent in 2020 and 2.4 percent in 2021 - helped by eased tensions between the world’s two largest economies and a favorable business cycle that will help boost semiconductor prices.

Inflation will come in at 0.4 percent this year and 1 percent next year, according to the bank, running well below the 2 percent target.

The decision to keep the rate unchanged was in line with market expectations. Board member Shin In-seok dissented. Shin cast a dissenting vote in favor of a cut in August along with board member Cho Dung-chul.

The governor said the bank is currently in wait-and-see mode, following cuts in July and October.

“The central revised down the prospect for growth and inflation, but we decided to maintain the key interest rate, given the October rate cut and that the bank needs to assess how the macro economy and financial stability will develop,” Lee said.

The chief maintained that Korea has room to cut, signaling the possibility for another reduction.

Lee’s stance and the dissenting vote, and the growth cut, led some analysts to expect a rate reduction early next year.

“We expect one rate cut within the first half of next year,” said Kang Seung-won, an analyst at NH Investment & Securities. “The existence of a dissenter indicates the need for a cut, while the revised economic prospect can be considered a critical signal for the action.”

Yoon Yeo-sam, an analyst at Meritz Securities, echoed the view.

“We maintain our view of a cut in the first half - possibly by April - because Korea still lacks growth momentum despite eased external downside risks.”