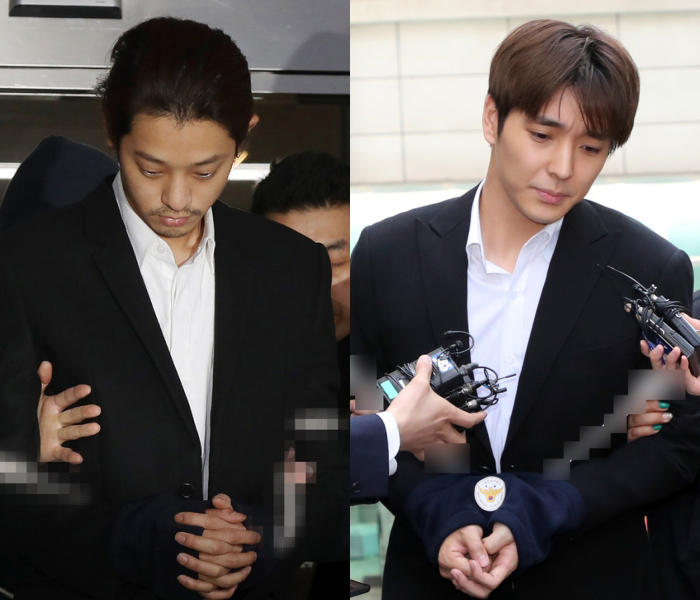 The pair was indicted in April for raping drunk unconscious women in Hongcheon County, Gangwon, in January 2016 and again in Daegu in March that year.

Jung was additionally indicted on charges of secretly filming himself having sex with the women and sharing the footage with friends on mobile chats.

The case came to light when police were investigating Seungri, the K-pop megastar of boyband Big Bang and found a KakaoTalk chat room in which Jung had shared messages and videos of the sexual encounters with Seungri and other celebrities.

“The two have asserted that they had sex with the women after obtaining their consent, but the women were in a state where they were unable to protest or resist,” the court said in its statement Friday. “Jung has testified that Choi also had sex with the women and Jung provided evidence including the KakaoTalk messages. Based on these, the court has ruled that Jung and Choi have together raped women who could not resist because they were too drunk.”

The pair was also ordered to undergo 80 hours of sex offender treatment and barred them from employment at children and youth facilities for five years.

The court said that the act of secretly filming and distributing explicit videos of women with others was “serious and grave.”
“The defendants, with their acquaintances in the celebrities’ circles, have also sexually assaulted and raped women, took videos in the process and shared them on their KakaoTalk group chat room,” the court said in its statement. “The defendants may be young in age, but the crime committed is too serious and grave. The court cannot see these actions as a mere joke. The victims have also requested severe punishment for the defendants.”

Also sentenced on Friday was the older brother of K-pop group Girls’ Generation’s Kwon Yu-ri for taking part in the sexual assaults with Jung and Choi. He received a four-year prison sentence while another defendant, indicted for the same charges and sentenced to five years. A fifth defendant was given a suspended sentence of an eight-month imprisonment.

Big Bang’s Seungri was also one of the stars at the center of the Burning Sun scandal, which erupted in 2015. Seungri was one of the operators of the Burning Sun nightclub in Gangnam District, southern Seoul, a hotbed of prostitution and drug use, according to police investigations earlier this year. He is accused of offering women for sex to investors in his nightclub business, embezzling nightclub funds, attempting to destroy evidence and secretly filming women. Police handed over the case to prosecution in June with the request to indict him.

In Korea, the police do not have authority to indict suspects.

Seungri is additionally accused of gambling abroad with YG Entertainment’s former CEO, Yang Hyun-suk. Police handed over the case to prosecution in October with the request to indict him and Yang.