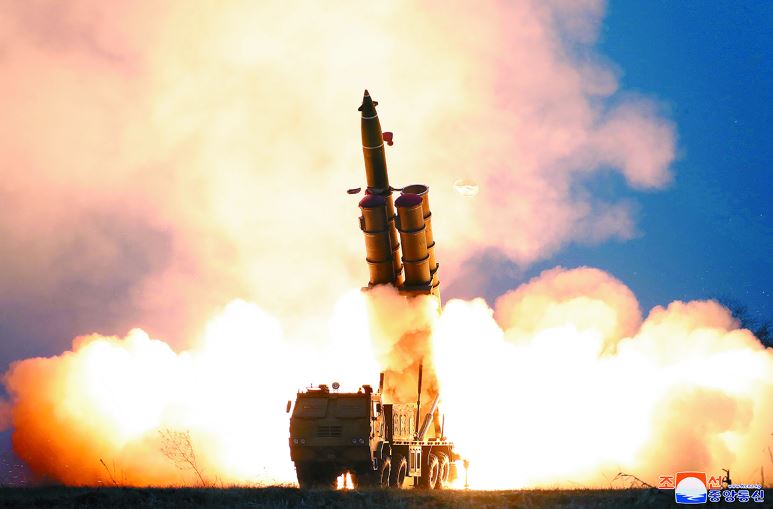 Rodong Sinmun, the official newspaper of North Korea’s Workers’ Party, reported on Friday that North Korea has successfully conducted the final test of a new super-large multiple rocket launcher with the firing of two projectiles that landed in the East Sea the previous afternoon. [YONHAP]

North Korea said Friday it has successfully conducted the final test of a new super-large multiple rocket launcher with the firing of two projectiles that landed in the East Sea the previous afternoon.

“The two rockets fired Thursday both flew about 380 kilometers [236 miles] and reached a maximum altitude of around 97 kilometers,” Suh was quoted as saying by Reps. Kim Min-ki of the Democratic Party (DP) and Lee Eun-jae of the Liberty Korea Party. “Other details are being analyzed by Korean and U.S. intelligence authorities.”

The NIS chief told the lawmakers that it was the North’s fourth test of the super-large MLRS. “On Aug. 24, the North tested the engine system and on Sept. 10, the North tested the precision guidance system,” Suh was quoted as saying. “The tests on Oct. 31 and Thursday were focused on checking the fusillade capability. The three-minute interval from the October test was reduced to 30 seconds in the latest test.”

When North Korean leader Kim inspected the test on Sept. 10, 2019, the interval between the first and second launch took 19 minutes. At the time, Kim instructed the military to improve the fusillade capability, which it appears to have succeeded in doing.

Ever since its first test of the new MLRS system, Pyongyang has made public the progress of its development through state media. After the August test, the North said the rockets landed accurately at the target. In September, the North said the system’s combat operational capabilities, flight route, accuracy and precision guidance system were verified. In October, the North said its third test confirmed the safety of the fusillade firing system. The fourth and latest test on Thursday “proved the military and technical superiority of the weapon system and its firm reliability,” the North said.

The interval between launches was also drastically reduced. The intervals from the first and second tests were 17 and 19 minutes, respectively. In October, the two rockets were fired three minutes apart. This week, the North reduced the interval to 30 seconds.

Based on the North’s announcements, it took 96 days for the North to perfect the system for operational deployment from the first test on Aug. 2. The KCNA report said not only Kim, but also other senior military officials including Army General Pak Jong-chon, chief of the general staff of the North Korean People's Army, and commanders of the large combined units of the military observed the test, an indication of a triumphant mood.

Throughout this year, the North has put efforts to upgrade its conventional weapons system. The North conducted a series of tests for three new types of missiles in the recent months, including a new type of short-range ballistic missile similar to Russia’s Iskander system. The tests of the super-large MLRS indicate that Pyongyang is aiming to complete a strike system of all areas of the South before the end of this year.

“The NIS sees the North’s latest launch of the super-large MLRS as a message toward the United States and the South that it will go back to the past if its goal will not be accomplished at the North-U.S. talks by the end of this year,” Chairwoman Lee Hye-hoon of the Intelligence Committee said after the NIS’s briefing. “Because the North had set the deadline to yearend, the NIS sees there will be more provocations of various forms, and there is a possibility of an escalated situation.”

Rep. Kim of the DP said the NIS also briefed the lawmakers about the North’s artillery firing drills on Nov. 23, the 9th anniversary of the North’s shelling on Yeonpyeong Island of the South. North Korean leader Kim supervised the drills on Changrin, its border islet north of the maritime border in the Yellow Sea, resulting in the South’s strong protest saying it violated the Sept. 19, 2018, inter-Korean military agreement.

“The lawmakers asked about Pyongyang’s intention of the [Nov. 23] artillery drills,” said Rep. Kim of the DP. “NIS said it was an intentional and premeditated action.”

“The NIS said the artillery drill is a violation of the inter-Korean military agreement but does not go against the truce agreement,” said Chairwoman Lee of the Intelligence Committee. “The North did not fire them toward the South, and their calibers were not big. The North appeared to have carefully planned it. The North must have considered that it would face a serious problem if it fires toward the South or uses large-caliber artilleries.”

The Sept. 19, 2018, military agreement between the two Koreas, signed after the inter-Korean summit in Pyongyang, stated that the two Koreas will stop any artillery firing within the 10-kilometer-wide buffer zone along the military demarcation line. The NIS confirmed Friday that the North’s firing drills took place inside the buffer zone.