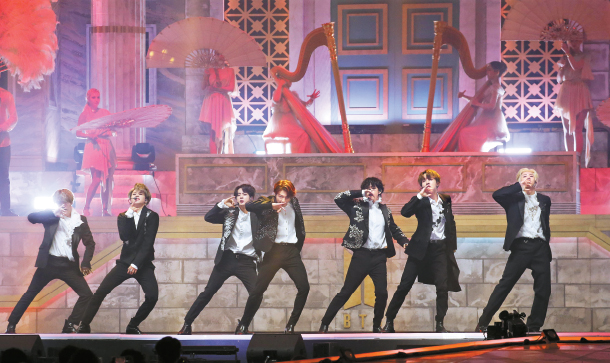 BTS wraps up the Melon Music Awards (MMA) 2019 on Saturday at the Gocheok Sky Dome, western Seoul. The boy band took home a total of eight awards on Saturday, including four of the biggest honors: Artist of the Year, Album of the Year, Record of the Year and the Best Song of the Year. [KAKAO]

The Melon Music Awards (MMA) 2019 wrapped up on the last day of November with music and entertainment on Saturday at the Gocheok Sky Dome, western Seoul, with the best of K-pop and some 20,000 fans filling the seats at the stadium. This year’s MMA was titled “MMA 2019 Imagine by Kia.” It was hosted by Kakao, supervised by Kakao M and MStorm and sponsored by Kia Motors, Pizza Hut Korea, Etoos and LG U+ Idol Live.

BTS also received the Male Dance Award, the Netizen Popularity Award and Kakao’s Hot Star Award and was also named among the Top 10 acts chosen by Melon votes and according to chart performance throughout the year. This is the second year in a row that they have taken the Album of the Year and Artist of the Year award. They nabbed seven awards in total last year.

“We love you so much,” shouted leader RM, earning the applause from fans and the audience. “Every time I go home after such a big event, I feel so small. All we can do is make music in our studio, practice and dance on the floor. I keep thinking, can we actually do something? But you have become the light in our long dark night, and so we hope to light you up in your night.”

Member Jungkook added, “We are so happy that we can make others feel better and happy by doing what we like with our music. We’ll keep making meaningful songs and carrying on. We love you.”

The Best Songwriter Award went to Pdogg, whose real name is Kang Hyo-won, who wrote BTS’s music. He has been participating in the production all of BTS’s albums since the band’s debut.

Others who were included in this year’s Top 10 were Mamamoo, BOL4 (Bolbbal4), MC The Max, Jannabi, Jang Beom June, Chungha, Taeyeon, Heize and Exo.

“We saw a lot of saddening things this year in 2019,” said Heize upon receiving the award. “Everyone has done so well, and has done their best in going through what they have. I wanted to take the chance to say that.”

The Rookie of the Year awards went to boy band Tomorrow X Together and girl group ITZY, while boy band AB6IX took home the Hot Trend award. Best ballad was given to Tayeon, best rap/hip-hop to trio Epik High, best R&B/soul to Heize, best rock to N.Flying, trot to Hong Jin-young and best indie to MeloMance. Stage of the Year was given to boy band Seventeen and the Music Video Award to singer Kang Daniel. The best original soundtrack was given to Gummi, and last but not least, the 1theK Performance Award went to The Boyz.

The stars shared their joy of being honored with performances, including BTS, Chungha, Kang Daniel, Jannabi, Mamamoo, ITZY, Tomorrow X Together, N.Flying, AB6IX, Heize and The Boyz. BTS closed this year’s MMA with their powerful “Dionysus.”