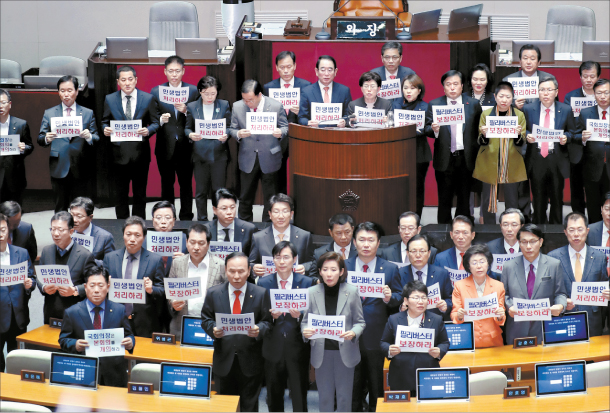 Lawmakers from the ruling Democratic Party (DP) and the main opposition Liberty Korea Party (LKP) locked horns Sunday, blaming each other for the ongoing stalemate in the National Assembly.

The bickering came after the National Assembly failed to convene a plenary session last Friday, in which lawmakers were expected to pass bills and discuss scores of items for 2020. A total of 199 bills were awaiting votes.

Before the session was about to open last week, the LKP threatened to start a filibuster to block parliamentary votes on contentious bills and approved a filibuster drive with a plan to have its lawmakers take turns speaking for four hours until the regular parliamentary session ends on Dec. 10.

A filibuster involves lawmakers speaking for extended periods as a way to prevent a parliamentary vote or delay the passage of a bill.

The DP protested the LKP’s filibuster announcement and said it would not participate in the Friday plenary session, leading to no meeting at all.

Tensions between the LKP and the DP has been running high after the highly controversial electoral reform bill was referred to a National Assembly plenary session last Wednesday.

The bill, which tentatively proposes to adjust the proportion of single-member constituencies to party-list seats in the 300-member legislature, has been subject to immense political debate, with the LKP declaring it would do everything it can to block a four-party coalition led by the DP from pushing through a vote.

After the LKP announced last Friday about its filibuster plans, local media shed light on the parents of late Kim Min-sik, who died on Sept. 11 at the age of nine in front of his elementary school in Asan, South Chungcheong, in a car accident.

After weeks of pending in the National Assembly and barely receiving any attention from the public, the bill instantly gained media limelight on Nov. 19 when President Moon Jae-in received his first question from Kim’s parents during a town hall meeting with selected members of the public at the MBC headquarters in Sangam-dong, western Seoul.

Responding to Kim’s tearful parents who were holding a framed picture of their young son, Moon promised the speedy passage of the bill, and just eight days later, the parliamentary Public Administration and Secretary Committee approved the bill last Wednesday to be put up for a final vote in a National Assembly plenary session.

The Kim Min-sik bill was expected to finally pass last Friday, until the LKP called for a filibuster.

Amid mounting public criticism, the minor conservative Bareunmirae Party on Sunday suggested the parties hold a plenary session today to pass bills that are considered urgent to “reforming the public’s lives,” such as the Kim Min-sik bill.

Rep. Lee In-young, floor leader of the DP, welcomed the plan and said the party was willing to review the idea only if the LKP retracts its decision to carry out a filibuster.

Rep. Na Kyung-won, floor leader of the LKP, said she, too, welcomes the Bareunmirae Party’s suggestion to vote on bills that are deemed critical for the lives of the public, but refused to withdraw her party’s plan for a filibuster. In a press conference Sunday, Na blamed the DP for the National Assembly’s failure to pass the Kim Min-sik bill last Friday, saying the bill would have passed if last week’s plenary session was held as planned.

Na explained that although the LKP signed up for a filibuster on all 199 bills, it actually wants to filibuster only five of them, not including the Kim Min-sik bill. Na explained that her party had no other choice but to use such a political tactic because it feared that the DP might change the order of the bills to be voted on to make the contentious bills come at the very end. That way, Na said, the DP can shut down the National Assembly before the LKP gets a chance to filibuster.

Lee denied Na’s statement in a separate press conference Sunday, saying that the LKP signed up for a filibuster on all 199 bills at first, but as it faced a storm of criticism from the public, it backed down to say that the LKP would cooperate in passing bills related to the lives of the public, including the Kim Min-sik bill, but only on the condition that the LKP’s filibuster was guaranteed.