In AI store, future is now, credit or debit

In AI store, future is now, credit or debit 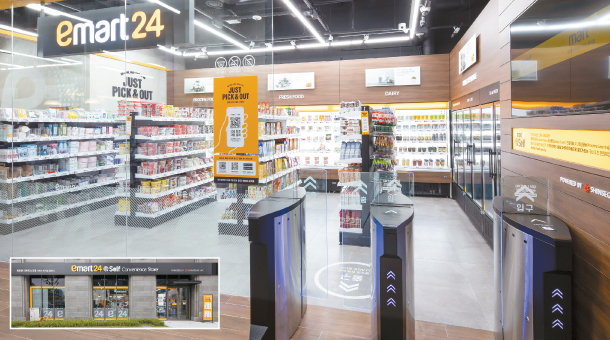 Interior of the Emart24 branch in Janggi-dong in Gimpo, Gyeonggi, the first cashier-less autonomous checkout convenience store in Korea. [EMART 24]

They say it is the first cashier-less autonomous checkout convenience store in Korea.

The robotic shop, an Emart24, is in Janggi-dong in Gimpo, Gyeonggi.

In the store, there is not a single checkout counter or cashier to scan barcodes on products or to take cash or credit. Items are checked out automatically.

The company says that this is possible because it uses artificial intelligence (AI) to manage every corner of the 46-square-meter (495-square-foot) store with cameras and sensors. Thirty-one cameras on the ceiling can track up to 10 customers at the same time.

Sensors installed on the shelves are AI’s greatest ally.

The sensors detect a product’s weight and size. As of Nov. 13, this store was selling around 790 items. Every product had been checked by AI. From a bottle of drinking water to a pack of gum, AI processed all the weights and shapes through deep learning technology before they were stocked in the store. After this cataloging, AI can recognize which items a customer checks out from the store no matter how small it may be.

“Even Pepero, a chocolate stick snack, which looks the same to customers, are different in weight and have different packaging designs on the front, side and back depending on whether it’s normal Pepero or almond Pepero,” said Kim Kyung-joo, Shinsegae I&C PR manager.

“The possibility of AI trained by deep learning technology to mistake normal Pepero for almond Pepero is near zero.”

While a number of competitors have opened their own cashier-less establishments, Emart24 believes that has the first that can truly be called autonomous.

AI at Emart24 knew all about promotions like the back of its hand. For example, noodle maker Nongshim is holding a “buy two, get one free” special on its Neoguri cup noodle, which costs 1,600 won ($1.36) for one.

AI is changing the landscape of the retail industry and consumer behavior, but the technology is not perfect. To enter this store in the first place, a customer must sync a credit card or a debit card to the SSG Pay app and get a QR code.

However, on the day of the visit, a QR code couldn’t be generated on the reporter’s iPhone for an unknown reason. We could finally enter the store using the Shinsegae I&C PR manager’s QR code on her smartphone.

According to Shinsegae I&C, these limitations will be overcome after AI sharpens its technology over time through deep learning.

The AI failed a number of stress tests. It was unable to conduct a proper checkout twice when it was given eight unusual checkout situations. In one case, the reporter took a sip of water from a bottle and left it in the store. No charge was registered.

In another test failure, a pack of gum was purchased from outside and swapped with a pack of gum of the same weight being sold in the shop. The switch was not recognized.

Some purchases were not processed immediately, and a delay of about five minutes was experienced.

“Similar cashier-less stores in the United States experience up to a one-hour delay, so five minutes is quite successful,” explained Shinsegae I&C.

Non-payment is also a possibility if the customer uses a bank account with a zero balance and refuses to pay afterwards.

“For customer convenience, debit cards are allowed along with credit cards. For such cases, our customer service center has requested the customer to pay, and not a single customer refused the payment,” said Kim Kyung-joo.

During two hours on a recent day, the only customers using the store were employees of Shinsegae I&C. Normal customers visited the store, but when they learned that they could only enter after downloading the app, they left and used a vending machine.

“Korea is categorized as a major IT country, but the speed of implementation of AI in Korea’s retail industry is slower than those of competing nations due to regulatory voids and insufficient flow of competent human resources,” said Kim Si-wuel, a consumer information science professor at Konkuk University.

“Universalization of AI in the domestic retail industry will take time.”

Some worry that the personalized AI recommendation system encourages spending. For example, when a customer searches a product but doesn’t buy it on Coupang, the website recommends the same product to the customer everyday.

A travel ticketing site might look into a customer’s email, SNS and browser history to recommend a travel destination that fits that customer’s tastes.

“The moment an individual enters a website, he or she is immediately under covert surveillance of so many Big Brothers,” said Park Hun, a professor at the department of science in taxation of the University of Seoul.

Retail is also at a disadvantage in securing key personnel for AI.

“As AI technology spreads and as its application expands to a larger field, the whole competition hinges on the capacity only the elite high-tech workforce can provide,” said Hong Jung-woo, a senior researcher at the Korea Institute of Science and Technology Information.

“Compared to IT companies such as Google and Apple and major companies like Samsung Electronics and Hyundai Motor, retail companies are in a less favorable position in attracting key AI personnel.”

AI may also reduce the number of people employed.

“Job reduction is inevitable in the process of AI technology development and innovation,” said Kim Dong-hwan, the president at Agro-Food New Marketing Institute.

“However, as this process can also give birth to new jobs, re-education and reassignment systems must be in place for people moving on to new jobs.”