Whitney Houston was undoubtedly an iconic figure not only to music fans but also to anyone in the music industry in the 1990s. Almost every female singer looked up to the one-of-a-kind vocalist at the time, and singer-songwriter Park Ki-young was one of them. She listened to Whitney Houston albums until her records wore out.

The queen of pop passed away years ago, but Park carries on the legacy of Houston by taking the stage in the musical “The Bodyguard” that is running through Feb. 23 at the LG Arts Center in southern Seoul.

The musical is based on the 1992 film of the same title, in which Houston played the lead character Rachel Marron, a spoiled and demanding diva.

JoongAng Sunday, an affiliate of the Korea JoongAng Daily, met with Park a week before the first scheduled performance of the musical in November and Park expressed that she was not that thrilled by playing her role model. 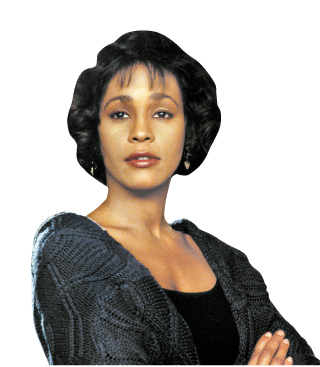 “I’m quite upset,” said the 43-year-old singer. “I was tricked into [the musical] by the name of Whitney Houston.

“I’ve searched and watched all the video clips of her, but I have never seen her dancing this much. All the dances [I have to do for the musical] are so showy, like something Beyonce would do. I have to sing 13 songs while doing the choreography. All the lyrics are changed [into Korean] and I also have to sing some very low notes. I want to sing at a higher pitch, but there is no room for flexibility because it is a licensed musical. I’m just trying to fit myself into the musical,” said Park with a laugh.

Unlike some singers who naturally make the transition into musical theater, Park has only been a part of two musicals over the past 20 years: “Return to the Forbidden Planet” in 2002 and “The Sound of Music” in 2013. Park said she wasn’t enthusiastic about doing musicals because, she thought, it was not something she fit into.

But she returned to the stage again simply because the role that fell into her lap was played by Houston. Little did she know that it would require so much effort.

Four actors have been cast to play the role of Marron, including Park and musical star Kim Sun-young. “Kim once told me that this is the toughest role she has ever played in her 20-year career.”

Park went on, “I feel like I’ve joined the Marine Corps. We have this special training program called a boot camp. We did nine different workouts, from planks to squats, starting early in the morning. I think I’m quite fit, but it was so hard for me to follow the training sessions. But, now I have rock-hard abs thanks to the hard-core training.”

The role of Marron first went to singer Lee Eun-jin, also known as Yangpa. She played Marron in the musical’s local premiere, but she turned down the part this time around and it eventually went to Park.

“I understand Lee 100 percent,” said Park. “She is very calm, but Rachel is quick-tempered. I’m in a bad mood [because of the decision I made of doing this musical], so I can relate to the character,” said Park with a laugh.

“But I find the romantic scenes very hard. My partners are Lee Dong-gun and Kang Kyung-jun. They feel like my younger brothers.”

Park talked about how tough it is to play a protagonist in a musical that is heavily focused on the female lead, but her eyes welled up as she mentioned her peers on stage.

“I wept yesterday by looking at the other actors doing rehearsals. I felt sorry for them. Multiple actors alternate in playing the lead roles, but the ensemble cast keeps doing the whole dance that is almost as difficult as acrobatics. They eventually left the stage by crawling on the floor at the end of the rehearsals. If I make a mistake, they have to repeat the same thing. I told myself that I have to do my best for these people.”

Park is a die-hard fan of “The Bodyguard.” She still has the cassette tape, the CD and the LP of the original soundtrack of the film released in 1992.

Park considers the album to be “the bible.” She has learned many things from the album and she still considers it legendary.

“I sang ‘Greatest Love of All’ when I took a college entrance exam. And I appreciate [Houston] for making me sing all the genres, from rock to soul to pop, because I could learn a lot from her [way of singing]. By looking at her, I was able to learn how to take a breath and add techniques when singing. It was heart-wrenching to see her having difficult times. She came to Korea a year before her death in 2011. She sang a song and then she couldn’t use her voice after her throat became hoarse. The audience rooted for her until the end of the performance, but I later heard that her concert in Australia came to a halt. The audience booed her and all the tickets were refunded.”

Park said she could understand Houston’s unfortunate later years. Park is a singer, but she is also the mother of an 8-year-old girl. She sometimes reflects her own life through Houston’s.

“[She] wasn’t raised in a happy family when she was young. I think the most important stage in life is childhood days.”

She almost gave up on her career when her daughter was young, but now she manages to juggle work and life.

“I never go out at night and I turned down all the offers I have gotten for doing a radio show or giving lectures at colleges [to focus on my child.]”

Nevertheless, Park accepted “The Bodyguard” simply because it was the work of her beloved muse.

“My daughter is getting jealous of the child actor who plays my son in the musical. So I showed her the musical and told her that I was able to become a singer thanks to Houston.”

Just like Rachel has a bodyguard who keeps her safe from a stalker, Park also has her own bodyguard in real life.

Lee Yoon, the head at Park’s management company, used to be a big fan. The two later meet and she became Park’s manager.

“I had to follow directions [given by the management company] for nearly 20 years, but Lee is the first person to tell me that I can do whatever I want. She said she would support me no matter what I do.”

In Korea’s music scene, it is not easy for a 40-something female singer to be at the top of show business like Rachel is in “The Bodyguard.” Trends are constantly changing and the music industry is heavily dominated by boy and girl groups.

In order to keep pursuing her career, Park has continued to work hard. One of her many projects is doing a series of concerts at small venues. She receives requests from her fans and turns their stories into songs. The singer also releases new singles every season.

For a professional singer like Park, appearing on singing competition shows like “Immortal Songs: Singing the Legend” may not be an easy decision, but she keeps challenging herself by trying various genres from rock and jazz to blues and tango to opera.

“I think I’m quite flexible so I’m open to all genres. I did the competition shows not to win, but because I desperately needed a place where I could sing.”

Park recalls that 2010 was a turning point in her career. She wanted to sing, but she had nowhere to go. That’s when Park received an offer from director Lee Chang-dong to make a song for his film “Poetry” (2010).

“The film shows poetry written by the director at the end. I made a song called ‘Song of Anes’ using that poetry. The director appreciated me for making that song and told me ‘Please keep making music that can comfort others.’ After that, I began to do singing competition shows. The music director for ‘The Bodyguard’ also told me he could define me with the word ‘diversity’. I will show you my diverse sides through the 13 songs in the musical.”