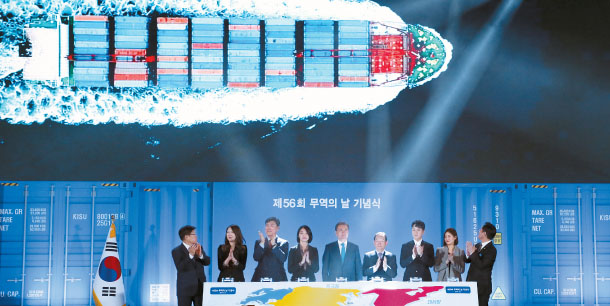 President Moon Jae-in reaffirmed the government’s goal of making Korea one of the world’s top four exporters by 2030, while an initiative to boost beauty and cosmetics exports was also announced.

“We will not stop until the day we become one of the top four exporters in the world by 2030,” President Moon said Thursday while attending a day celebrating Korea’s trade held at Coex in Gangnam District, southern Seoul.

He said that the country’s free trade network would be expanded so that it would cover 90 percent of the world’s GDP by 2022, up from the current 77 percent. Agreements would be signed with Malaysia, the Philippines, Russia, Uzbekistan and Mercosur, the South American common market.

The government will also be focusing on regulatory reform.

“Regulatory reform is necessary in strengthening the competitiveness of new industries,” Moon said. “We will develop the new industries - system semiconductors, bio health and future cars - as well as cosmetics, secondary cell and food industries as future export engines.”

Through regulatory sandboxes and regulation-free zones, the foundations of success in new technologies and products will be established, he said.

The president emphasized the independence of the materials, components and equipment industries.

“While local companies are quickly adapting, coexisting cooperation [between big companies and their small counterparts] is growing,” Moon said, hinting at the efforts by Korean manufacturers to develop substitutes for key materials endangered by Japanese restrictions.

Through the solidarity of Korean companies, scientists and technicians, the country is overcoming Tokyo’s export restrictions.

“The legislative foundation for supportive measures and a system for development have been established,” he said. “More companies will be able to advance in the global market.”

The president added that the government will strengthen “brand K” through Korean Wave marketing and seek new overseas opportunities.

The government on Thursday released its plan to expand the support of Korea’s beauty and cosmetics industry in the global market.

The goal is to become the world’s third-largest exporter in global beauty and cosmetics by 2022.

As of last year, Korea’s beauty and cosmetics exports totaled $6.3 billion. The government will raise K-beauty exports to $7.9 billion and work to get the number of Korea beauty and cosmetics companies in the world’s top 100 from four to seven. The number of companies in the business with more than 5 billion won ($4.2 million) in annual revenues will be taken to 276 from 150.

The government will also help expand the development of basic materials for cosmetics and the research and development for new technologies that will help reduce the import of raw materials from Japan. Currently, raw materials imported from Japan used in manufacturing beauty and cosmetics products account for 23.5 percent of value. The goal is to lower that dependency to 18 percent by 2022.

“Trade, which has led [our] growth through openness and inclusiveness, is our most powerful strength,” Moon said. “As we have developed our economy so far with the world as our stage, we will create a new era with trade.”

President Moon said it was trade that helped Korea to become what it is today, including its rank as the world’s fifth in terms of the business environment and now on the verge of entering the world’s top 10 list in terms of national competitiveness.

“The reason why we can be optimistic of our future is because we have strong trade power,” Moon said. “Korea, Germany and China are the only three countries in the world that have achieved a [trade] surplus based on manufactured products among countries that have achieved more than $1 trillion in trade.”