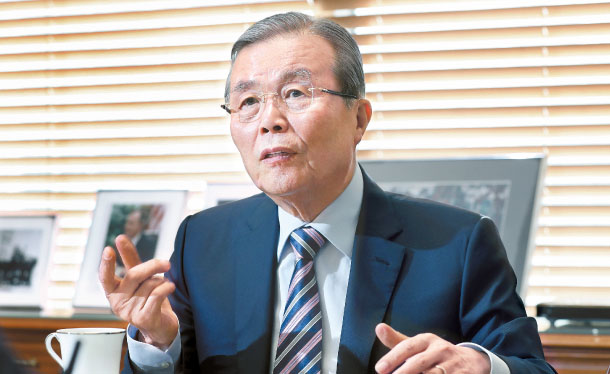 “There is not a single government affair running smoothly. But the real problem is President Moon Jae-in doesn’t have a clue about what the problem is. When President Moon says ‘the nation is doing well’ in public, that’s not what he really thinks. He’s just reading out what his staff wrote from him. It would be accurate to say that ‘he’s reading what his subordinates wrote for him like a parrot.’ I was in the same political party with that man, and I have experienced [what kind of man] he is,” said Kim Jong-in, former leader of the ruling Democratic Party (DP).

At an office in Gwanghwamun, central Seoul, on Nov. 28, the JoongAng Ilbo spoke with Kim, the DP’s former emergency committee chairman and a strategist who snagged victory after victory in general and presidential elections for both sides of the aisle.

With the nation in chaos amid conflict over fast-track bills, the hunger strike staged by the main opposition Liberty Korea Party (LKP) leader Hwang Kyo-ahn and the Blue House alledgedly directing the halt of an inspection on specific personnel and ordering a target investigation on others, Kim’s diagnosis on the current crisis offers insight.
The following is an excerpt from the interview.

Q. What is the biggest problem in the current crisis?

A. The ruling party is trying to revise election laws and make some kind of a new investigative agency for senior public servants, but I am baffled by the necessity of it. The new type of proportional representation system, best seen in Germany, was adopted because of the country’s unique status as one of the defeated countries of World War II. The system was put in place to prevent a specific political party from dominating power so that a dictator like Hitler will never arise again.

Then why go through all the trouble to employ an unnecessary system? It’s because the ruling party is not confident about the upcoming general elections. If the ruling party loses the elections, the new system can serve as an excuse for the defeat. The Justice Party should wake up too. The new system won’t necessarily guarantee more seats [in the National Assembly] for them.

The Justice Party is daydreaming that it will garner up to 10 percent of the votes, but as things stand, the party doesn’t have an identity. It ended up as a byproduct of the DP. The real “liberal” voters will cast their votes to the Minjung Party whose lineage leads to the Unified Progressive Party, not to the Justice Party.

In the 2016 general election, when I was the DP’s emergency committee chairman, former Deputy Prime Minister Han Wan-sang and other political figures from the Justice Party came to me and said, “If it goes on like this, the opposition won’t be able to secure 100 seats,” calling for a unified public recommendation.

However, in a meeting at Kwanhun Club, I turned down the offer right away and said, “How can I unite with a political party that has a different identity?” As a result, the DP took first place in the general election. If the ruling party is running the country well, then there’s nothing to worry about in relation to the general election. I don’t understand what they are so afraid of, to the point of changing the whole election system in a bizarre way.

What is your opinion on a new investigative agency for senior public servants?

What are they trying to do with a weird institution that doesn’t exist anywhere in the world? These days, people elected through an election system degenerate into an authoritarian government. This administration’s first move was taking control of the judiciary and the press. It’s no different from the previous government which it criticized so much.

It’s over my head how the Blue House senior secretary for civil affairs office can wield such unchecked power. Politics outside the boundaries of common sense lead to bad outcomes. [During the French Revolution], Robespierre’s reign of terror led to his execution by guillotine, the very invention he created.

The DP has emphasized democracy, human rights and rule of law from the outset.

Actually, the DP has conservative roots. But after recruiting activists and members of the 386 generation in large numbers during the Kim Dae-jung and Roh Moo-hyun administrations, the party became a liberal one. But considering that the DP doesn’t have core values to pursue, it’s no different from conservative parties.

In 2016, when I was the leader of the DP I said, “Unless North Korea gives up its nuclear [arsenal], it will perish.” Members of the party shot back, saying that “Your words are against the party’s identity.” Then I asked “What is the DP’s identity anyway?” They couldn’t give me an answer.

The LKP is saying that it can win the upcoming general elections if it can integrate the opposition.

As long as the LKP remains a political party of the past as it is right now, integration will be meaningless. Voters are lost. They hate the DP and the LKP at the same time. [The LKP] shouldn’t try to make something happen through integration only. If [the LKP] faces up to the reality of the nation and provides what the people desperately want, integration will come by itself.

What do the people expect from the LKP?

The LKP is unpopular especially among people in their 30s and 40s. With polarization stretching over 20 years and the birthrate plunging to 0.8 percent, the LKP has failed to provide a vision to tackle the reality that has no future for young people.

LKP leader Hwang Kyo-ahn went on a hunger strike that led to his hospitalization and has brought up the idea of a “50 percent reshuffle on public recommendation.”

[The LKP] must have felt frustrated. The move might change the atmosphere, but it won’t be enough to lead a major trend. A reshuffle alone won’t bring a victory. A victory can only be achieved when the LKP meets the challenge of our time and the national sentiment.
In the 2002 presidential election, when everyone predicted Lee Hoi-chang’s win, my bet was on Roh Moo-hyun. At that time, late President Kim Dae-jung aggravated polarization to deal with the aftermath of the Asian financial crisis in 1997. In such situation, Roh, who looked like an average guy had an advantage over Lee, who was kind of out of touch.

If a general election were held tomorrow, how would it play out?

The DP and the LKP would take a similar numbers of seats. The Justice Party and Bareunmirae Party would be expecting leftovers. There is also the possibility of a third party led by those born after 1970 doing well in the election, ultimately dividing the seats into three with the DP and the LKP.

Looking at the current situation, the DP is unlikely to succeed. Right now, voters are 30 percent liberal, 30 percent conservative and 40 percent undecided. The election can’t be won only with core supporters. The main reason behind the Saenuri Party’s defeat in the 2016 election was because it only cared about its core [conservative] voters. The DP is on the exact same path as the [Saenuri Party.] That will never win an election.

Then what should the two parties do?

The reason behind the DP’s win in the 2016 general election was my leadership. The same goes for the Saenuri Party’s win in the general and presidential elections in 2012. When I was leading former President Park Geun-hye’s Haengbok Committee, I guided the “jarhead conservative” party to the left. Against fierce opposition, I changed the party’s doctrine and policy to economic democracy and welfare and pushed through an election pledge that promised a basic pension of 200,000 won [$168] for people over 65. The game plan was make the elderly, who have a low voter turnout rate, show up at the voting booths. The strategy worked like magic.

On the afternoon of the election day, elderly people rushed to the voting booths. The DP welcomed the high voter turnout rate first, but later, it kicked itself. Kim Se-yeon, a three-term lawmaker of the LKP who announced that he would not run for the upcoming election, and Rep. Shin Sang-jin in charge of the LKP’s public recommendation reform paid a visit to me a few days ago, and I told them the exact same thing. In other words, an election is won when a political party has a vision to expand outwards and a policy that can win over the people, not by the politics of switching people.

You seem to have high hopes for a third party led by people in 30s and 40s. Any plans to play a role yourself?

Let’s wait and see. In mid-December, [the dynamics of the general elections] will be pretty clear. If God gives me a sign “to do something for the country,” then … (laughter).