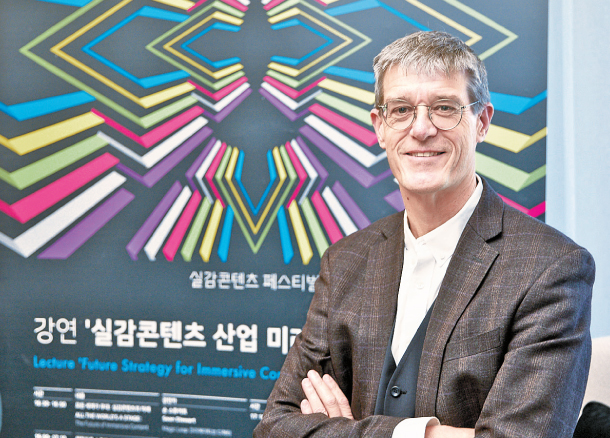 Novelist and creative director of Magic Leap, Sean Stewart sits down for an interview with the Korea JoongAng Daily on Thursday prior to giving a speech at the Immersive Content Fair. [KOCCA]

Immersive content - the likes of augmented reality (AR), virtual reality (VR), mixed reality (MR) and extended reality (XR) - may still seem like something out of a distant sci-fi future, but this technology is expected to dominate the culture of the next generation and Korea is where it’s likely to arrive fastest, according to Sean Stewart, creative director of Magic Leap.

Korea Creative Content Agency (Kocca) kicked off its first Immersive Content Festival (ICF) on Thursday to run until today at M Contemporary, an art gallery inside the Le Meridian Seoul Hotel in southern Seoul. The ICF was held as a part of the government’s content innovation plan announced earlier this year, during which President Moon Jae-in vowed to fund and support content creators in Korea, develop immersive content using the latest technology and export Korean content to enhance shin Hallyu, or the new Korean wave.

“As you all know, immersive content is expanding into various territories and genres, and it’s becoming a staple source of growth for future Korean industry,” said Kim Young-jun, president of Kocca.

“It has already been recognized during the recent Korea-Asean summit as shin Hallyu content. Our 5G communication infrastructure will allow people to connect faster, but immerse deeper into the content […] The government had stated its goal is nurturing immersive content, and Kocca vows to give unwavering investment and support for immersive content to leap into the future.”

SKT showed off its 5G technology during the ceremony with its “5GX Multi-view” technology. Using the tech, music fans can choose a particular member of a group to follow alongside a wider view of the whole group. The carrier showed off the system with performances from girl group Lovelyz and rookie band AfterMoon on Thursday.

During the three-day run, ICF allows visitors to try all of the latest immersive content. There are 20 immersive content projects that have been funded by Kocca, and 19 VR projects that were chosen to compete for the agency’s VRound contest are on display. Four partners - “Beat Saber Arcade” by SKonec, “AI War” and “Saving a Cat” by xorbis and “Helios” by Finger Eyes - also contributed their works. 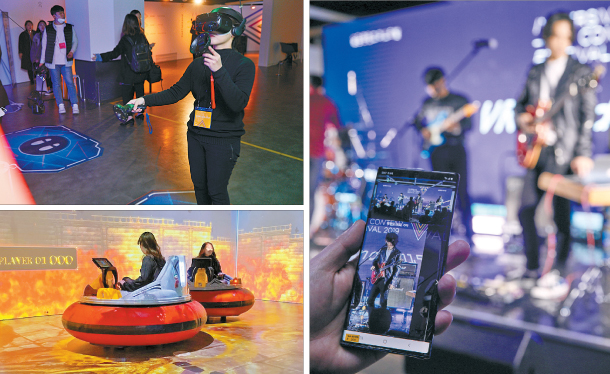 A visitor tries out virtual reality gear at the Immersive Content Fair on Thursday at M Contemporary in southern Seoul, left. Right, a visitor watches AfterMoon perform using 5G technology that allows them to track a certain member and also view the whole band at the same time. [KOCCA]

ICF provided not only the exhibit, but also music performances using the latest technology and a series of lectures by experts in the field. Among them was Stewart - director of head-mounted virtual retinal display headgear manufacturing company Magic Leap - who flew to Seoul for the first time to give a speech on “The Future of Immersive Content” on Thursday afternoon.

“I was really excited to be asked [by Kocca] and I honestly jumped at the chance,” he told the Korea JoongAng Daily ahead of his speech. “I’ve never been to Korea before, and this is one of the places that is the most interesting in the world right now for this kind of work.”

Likening immersive content to a dance, Stewart explained that people do not consume cultural content the way they used to. While he started out his career as a science fiction writer, writing novels was a process in which he spoke and the reader listened.

“Now, instead, it’s ‘I speak and you react,’” he said. “So when I’m a novelist, creating art is like making food. I’m a chef and I present the food to you. You can decided whether you like it or not. But when I’m working in immersive, it’s more like a ball room dance. I come up to you and ask, ‘Would you care to dance?’ If you care to dance, then we dance together. If you don’t, nothing happens.”

Stewart, born in 1965, started out as a novel writer in the late 1980s, but transitioned into writing - or rather, creating - interactive fiction.

In 2001, he penned “The Beast,” an alternate reality game that not only narrated a certain story, but changed its plot according to different choices made by the readers. Since then, he has been pioneering the field of interactive fiction and alternate reality games. So for him, immersive content isn’t something out of the future where it’s just about how the technology advances to achieve high-end graphics or images, it’s technology that’s with us here and now as a tool to deliver a story to the next generation.

Quoting his friend, writer William Gibson, Stewart added, “The future is already here, it’s just unevenly distributed. And that future has been here [in Korea] longer than anywhere else. Nowhere in the world is better set up for that than here.”