No reshuffle if Assembly still at loggerheads

No reshuffle if Assembly still at loggerheads 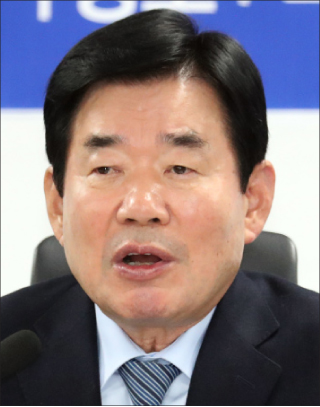 Rep. Kim Jin-pyo, a senior leader of the ruling party who is rumored to be the next prime minister, said a reshuffle will only be possible after the political standstill in the National Assembly is resolved.

“Only after visible progress is made between the ruling and opposition parties to vote on the fast-tracked bills, can we start a substantial consideration to change the prime minister,” Kim, a four-term lawmaker of the Democratic Party (DP), said Friday morning. “Until then, the Blue House will consider multiple candidates with multiple possibilities of announcement timing.”

Rumors have been widespread in the political arena that President Moon Jae-in will name Kim as the new prime minister as current Prime Minister Lee Nak-yon will return to the DP to prepare for the next year’s general election.

While the president announced Choo Mi-ae, former chairwoman of the DP, as the new justice minister on Thursday, no announcement was made about the new prime minister.

Kim, 72, is considered the most likely candidate to succeed Lee because of his ample experience as a public servant and politician. He was a veteran public servant who specialized in financial policy and was the minister of government policy coordination during the Kim Dae-jung administration.

Since 2004, he has won four consecutive terms in Suwon, Gyeonggi.

After Lee expressed his intention to step down last month, the Blue House reportedly vetted Kim as the exclusive candidate.

“Adding a new uncertainty to the political deadlock is undesirable,” Kim said. “Appointing a prime minister requires a majority vote of the National Assembly after a confirmation hearing.”

Kim, however, dismissed the speculation that Moon has decided to delay the announcement of the new prime minister because progressive civic groups protested his nomination by labeling him too conservative. “I have always been at the center of various economic reform measures pushed forward by the government,” he said.

“I completed the system of real-name financial transactions when I was working for the government,” he said. “I also worked on the real-name registration system of real estate properties and increased inheritance and gift tax rates. In the Kim Dae-jung administration, I worked on conglomerate reforms and restructured financial institutions and the financial system.”

While stressing that the Korean economy requires massive financial innovation for the nation to become a more advanced country, Kim said he will no longer answer any questions linked to the prime minister nomination. “I am doing my best to not cross the line,” he said.