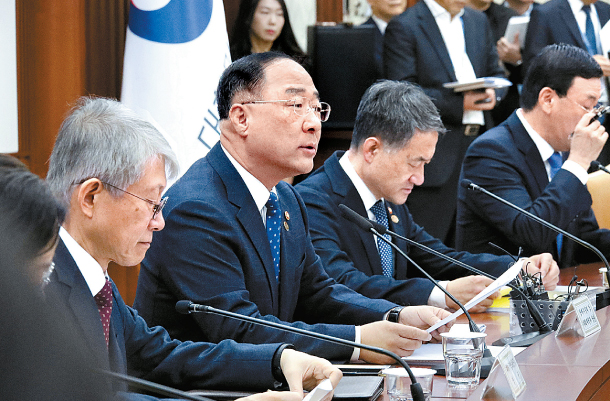 Deputy Prime Minister for the Economy Hong Nam-ki makes a speech before presiding over a meeting on boosting the economy at the Government Complex Building in Seoul on Nov. 13. [YONHAP]

HA HYUN-OCK
The author is the head of financial team of the JoongAng Ilbo.

Department stores generally have their grocery sections in the basement. It is a strategy to place food that attracts customers in the basement so as to lead them through sections upstairs to increase their sales. It is the so-called fountain effect in marketing. In economics, the fountain effect refers to boosting the economy by increasing incomes of lower-income individuals to drive up overall demand. It is the opposite of trickle-down economics, in which increasing gains of large corporations and high-income individuals leads to improvements.

The fountain effect underpins the Moon Jae-in administration’s income-led growth, the signature economic policy of the liberal administration. Income-led growth based on post-Keynesian wage-driven growth is a theory to artificially increase incomes of workers to encourage spending and economic growth. It is the theoretical basis for minimum wage increases.

After the incomes of the bottom 20 percent bracket grew by 4.3 percent in the third quarter compared to the same period last year, the president and the government praised themselves for the results, saying that income-led growth was behind the rise. Income increases of people with thin wallets is not enough to revitalize the economy. The government’s hefty fiscal spending only increased taxes. As a result of a sudden rise of real estate prices and added taxes, household spending is shrinking.

Deputy Prime Minister for the Economy Hong Nam-ki put a post on Facebook, as Dec. 10 marks his first anniversary in office. “Economy is psychology. The direction of the national economy is determined by basic health and competency combined with environment and psychology. I hope economic entities should have the confidence that we can work together and win,” he wrote.

As exports have been decreasing for 11 consecutive months, it is unclear if the economic growth rate will reach 2 percent this year at all. When economic health is crumbling, it sounds laid-back to say that psychology determines economy. I wonder if the government has changed its economic formula from “income-led growth” to “confidence-led growth” or “psychology-driven growth.”