Last month, 331,000 new jobs were created, making it the fourth consecutive month in which the total exceeded 300,000. 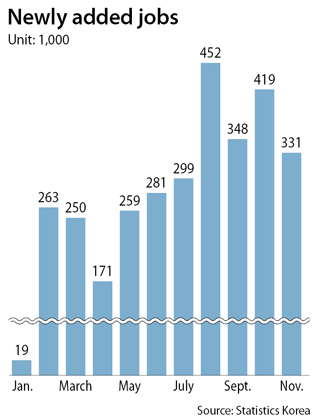 If the pace of hiring is maintained, as the government expects, the number of jobs created this year will break 200,000.

The jobs situation in manufacturing is better, with fewer positions lost last month, but government spending is still playing a significant role in the growth, while much of the gain is concentrated in positions for the elderly.

According to Statistics Korea Wednesday, 27.5 million people were working in November, which is 331,000 more than a year ago. The number of people unemployed dropped 43,000 from a year ago to 866,000, lowering the unemployment rate to 3.1 percent, down 0.1 percentage points.

Finance Minister Hong Nam-ki said that the strong report was a clear sign that the job market is in full recovery.

“All three job indices - number of jobs, employment and unemployment rate - that started to recover since August have continued in November,” Hong said. “The employment rate for those who are 15 years old and older and those aged between 15 and 64 rose 0.3 percentage points.”

He also noted that fewer jobs were lost in manufacturing and that total employment for young people was the highest since 2005.

“We’re seeing a continuing improvement, including youth unemployment at its lowest since 2015,” Hong said. “With the clear recovery of the job market, this year’s total number of people who were hired will likely exceed 200,000, which was expected earlier this year.”

The number of jobs in the health and social welfare category increased 135,000. That’s a 6.3 percent increase compared to the previous year. In the lodging and restaurant category, 82,000 people were hired, up 3.7 percent.

The number of jobs in manufacturing fell for the 20th consecutive month, since April 2018, with a total of 260,000 positions lost in November. That is down from the 810,000 jobs lost in October.

In the country’s key economic age group, of people in their 40s and their 50s, jobs have been lost for 26 consecutive months.

“The people in their 40s seem to have been most impacted by the stagnation in manufacturing, construction, wholesale and retail,” said Chung Dong-wook, Statistics Korea’s director on employment data.

Experts are concerned, particularly about the impact of job losses among 40-year-olds, as they are usually the most productive people in an economy and are also the most active consumers.

Dependence on jobs for the elderly is also a cause for worry, as these are mostly government-funded jobs.