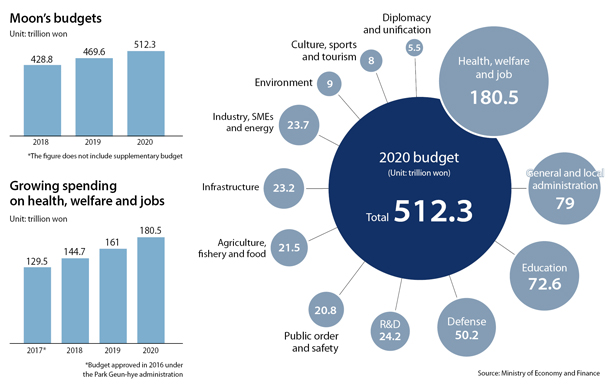 It was the first budget to be passed without an agreement between the ruling and leading opposition parties since the National Assembly Advancement Act was enacted in 2014.

Under that act, which was meant to end gridlock and violent altercations in the legislature, the government’s budget proposal is put to a vote on Dec. 1 even if the ruling and the opposition parties fail to agree on the bill at the Special Committee on Budget and Accounts by Nov. 30. That deadline was moved to Tuesday.

“The National Assembly approved the budget for next year on the last day of the parliamentary regular session,” Finance Minister Hong Nam-ki said Wednesday. “[With the approval] the government will work swiftly in follow-up actions including the allocation and early execution of the budget.”

The budget approved by lawmakers was 1.2 trillion won less than the one initially proposed by the government, which was 513.5 trillion won.

Among the 162 lawmakers who attended the voting session, 156 approved, three opposed and three abstained. 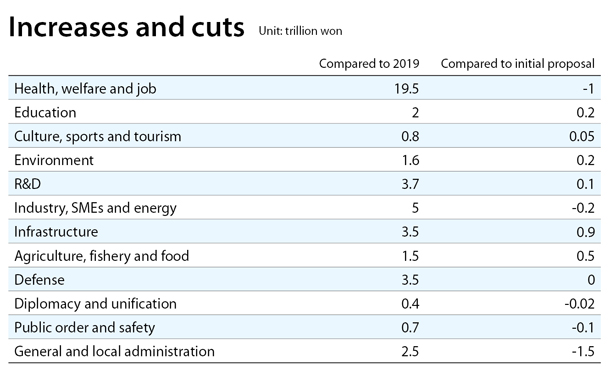 None of the 108 Liberty Korea Party lawmakers voted.

For size, next year’s budget exceeded this year’s record budget of 469.6 trillion won by 42.7 trillion won, or 9 percent.

The health, welfare and job budget was the largest component, at 180.5 trillion won, or 35 percent of the total 2020 budget.

It also saw the largest increase in spending, 12 percent, compared to the previous year.

The Moon Jae-in administration has increased spending for health, welfare and jobs by double digits every year. In the previous administration, such spending grew 9 percent or less.

There are concerns that the current administration has been subsidizing directly temporary jobs that contribute little to the economy.

Critics say tax credits for low-income households to encourage people to work would be better spent on job training or supporting start-ups.

“Welfare once started has the tendency to persistently grow,” said Sung Tae-yoon, a Yonsei University economics professor. “As such, that kind of spending needs to be strictly reviewed and managed.”

In the first 10 months of this year, the government collected 260.4 trillion won in taxes, 3 trillion won or 1.1 percent less than a year ago.

The government goal for the entire year is 294.8 trillion won. This means it needs to collect 34.4 trillion won in the last two months of this year.

The government says it’s not worried because in December, comprehensive real estate taxes roll in, which should cover the 3 trillion won shortfall in the first 10 months.

The largest cut from the government’s initial budget proposal was in spending on central and local government administrations, which is still the second-largest item in the budget at 79 trillion won. It was cut 1.5 trillion won or 1.86 percent compared to the initial government proposal.

But the budget for infrastructure grew 900 billion won from the initial proposal to a total of 23.2 trillion won, 3.5 trillion won or 17.8 percent more than this year.

This is the second year in which the infrastructure budget was increased from the initial proposal and over the previous year.

Moon had vowed that his government would not resort to major civil engineering projects to boost the economy.

The environment budget was also raised 200 billion won from the initial proposal to 9 trillion won amid growing concerns over worsening pollution.

The budget for research and development was also raised 100 billion won from the initial proposal to 24.2 trillion won.

In a statement released immediately after the budget passed, the Ministry of Economy and Finance said it will quickly execute it to contribute to boosting the economy.