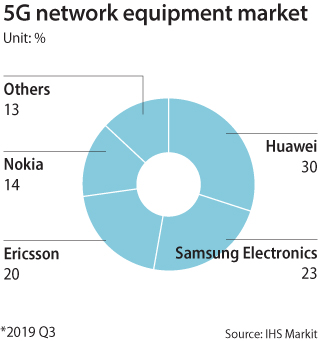 Samsung Electronics set a goal earlier this year to control 20 percent of the global network equipment market by 2025.

The company expects to make a big leap toward this target by setting a new sales record this year. Samsung has increased its global share in the sector to 11 percent in the third quarter this year, a huge jump up from just 5 percent in late 2018.

Samsung’s market share is much higher for 5G network equipment, ranking second globally with 23 percent, according to IHS Markit.

Things will likely continue to get better next year as more countries look to introduce 5G networks. But for the electronics company to reach its goal of 20 percent market share, it will inevitably have to compete against Huawei, which is rapidly expanding its footholds in China, Southeast Asia and Europe.

Telecommunications and securities experts estimate that the revenue from Samsung Electronics’ network business division this year will reach 6.25 trillion won ($5.2 billion). This is a 50 percent increase on year from last year’s 4.1 trillion won - a record high growth rate for the business division.

Last year, Samsung was the fifth-biggest company in the network equipment market with its 5 percent market share, falling behind ZTE, Nokia, Huawei and Ericsson, which controlled a huge 29 percent last year. This year, Samsung has climbed one spot higher on the ladder.

In the 5G market, Samsung is a much bigger player. Huawei leads the 5G market with 30 percent in the third quarter, followed by Samsung with 23 percent, Ericsson with 20 percent and Nokia with 14 percent.

In the United States, major telecommunications companies like Verizon, AT&T and Sprint selected Samsung as their network equipment provider, as U.S. President Donald Trump labeled Huawei a security threat. 5G networks are already enabled in several cities in the United States, but the coverage will expand significantly next year.

Samsung also leads the 5G equipment market in Japan, which is rushing to ramp up its 5G infrastructure ahead of the 2020 Tokyo Olympics.

The Korean company has already been chosen as the 5G equipment provider for Japanese telecoms company KDDI and is in talks with other firms. Japan’s major carriers - NTT Docomo, KDDI, SoftBank and Rakuten Mobile - are expected to spend 17 trillion won over the next five years on 5G. The anticipated cost of converting existing 4G LTE networks to 5G networks comes to 32 trillion won.

Another booster was Samsung’s strategy to gain leadership in the 5G market. Last year, the company replaced the division head and reshuffled the organization. Vice President Jeon Kyung-hoon, an expert in network equipment recognized for his achievements in leading the development of Samsung’s 5G network antenna and mobile communication chips, took the helm.

Next year, the company will launch its network equipment business in Europe. Its biggest rival is undeniably Huawei. This year, Samsung was able to benefit from China’s hands having been tied, but from next year, it may have to fight on equal footing.

The opportunity Samsung is waiting for is the expansion of demand for standalone network equipment that supports the high frequency of 28 gigahertz in 2020. This year, telecommunications companies across the world, including Korea, used non-standalone equipment for frequencies below 6 gigahertz.

Non-standalone literally means the network cannot stand alone and has to depend on something else to work, which for Korean companies is mostly the existing 4G LTE network. The introduction of standalone equipment will essentially be the start of independent 5G networks.

“Huawei was fast in developing equipment for less than 6 gigahertz, but in regard to equipment at 28 gigahertz, we’re more advanced technology-wise and are faster in commercialization,” said a Samsung Electronics source. “If the market for 28 gigahertz opens up, we’ll be able to completely surpass Huawei technology.”