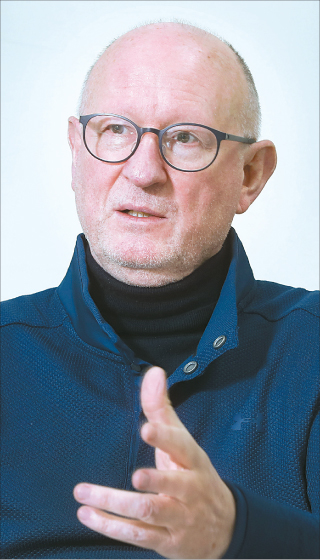 Michael Breen, CEO of Insight Communications Consultants and deputy chairperson of the Foreign Investment Advisory Council, speaks in an interview with the Korea JoongAng Daily on Dec. 5. [PARK SANG-MOON]

Seoul Mayor Park Won-soon’s billion-dollar plan to turn Seoul into a start-up hub by 2022, which he announced early this year, was a conception of combined efforts.

“The idea of promoting start-ups and creating an ecosystem friendly for start-ups from outside of the country came from a discussion we held at the Foreign Investment Advisory Council [FIAC],” said Michael Breen, CEO of Insight Communications Consultants and deputy chairperson of the council. “That was the biggest discussion among us last year.”

FIAC meets with the mayor of Seoul at least twice a year to share its ideas about what works - and what doesn’t - in the city for foreigners and foreign investors.

“FIAC is there for the benefit of the mayor,” Breen said. “It’s his group of foreigners. Occasionally we come up with something that city officials for the mayor didn’t think of before.”

The group, established in 1999 for the purpose of advising the mayor of Seoul - Goh Kun was the mayor at the time - was also behind the city government projects on developing areas in Mapo District, western Seoul, as a hub for media companies, turning Yeouido into the financial center of the city, as well as opening doors for more international schools to be established in the city.

Next on the agenda for further discussions is the development - or lack thereof - of the Han River.

“Another discussion that has been developing was in regard to what to do with certain parts of Seoul,” Breen said. “Take for instance, what to do about the Han River. For a major city with a huge river running through it, it is amazing how unused it is.”

Given that some of the members of the council have lived in Korea for decades - Breen has been in Seoul since 1986 - they tend to bring a more in-depth understanding of Korea than what may initially be expected of them.

“Some say [the lack of development of the Han River] has to do with security - the river goes up to North Korea, so you might get North Koreans coming in if you have a lot of traffic in the area,” Breen said. “The other reason may be historical flooding, which meant you couldn’t use the bank. Another reason we heard was that it has to do with a feng shui kind of thing.”

Breen said that a real estate expert once told him that some Koreans, especially in the older generation, tend to associate the river with aging and the passing of time.

“Another reason may be that the river at one point was at the edge of the city [before massive development in Seoul],” he added “It was really within the last generation that it came to be at the middle of the city.”

FIAC has proposed a number of ideas to the city government regarding a more active use of the river, including establishing a water research institute that will promote research collaboration among Korean and international researchers or a type of water purification and recycling center.

In commemoration of the committee turning 20 this year, the Korea JoongAng Daily sat down with Breen at Seoul Global Center in central Seoul - a building that is home to nearly a dozen international organizations as well as a local immigration office - on Dec. 5 to hear more about the Seoul that he and other foreign residents have experienced over the years.

Q. What were some other projects of the city government that came to fruition through FIAC?

A. The Seoul Global Center came out of a FIAC suggestion, and we suggested having an English radio program, so that’s the TBS English program. One of the issues has always been that foreigners who don’t read and speak Korean often don’t know what’s happening in the city. We also proposed that the city diversify its international school systems because all the international schools in Seoul, until about 10 years ago, were American or Christian. We knew of cases of foreigners who left Korea because of a lack of options [in regard to schools for their children]. That’s how the Dwight and Dulwich schools came in.

Who are the members at FIAC?

There are about 25 people, [and] we meet twice a year and have in-between committee meetings. Most of us are foreign residents, and some are heads of chambers of commerce, and we’ve had people from Japan, China, the United States, Europe, Australia and so on, and the members change as people come and go.

What are some major difficulties regarding life in Seoul for foreign residents?

My impression is that the “difficulty of living here” question is not such a big deal as it may have been when FIAC started. A few years ago when you thought about foreign investment, you think, what companies are not here, what industries are not here and how do we attract them. Because at the time some people would look at Korea and ask isn’t that a war zone? Will there be schools for my kids? Hospitals? Questions like that. Nowadays, Korea is more developed, or as developed as [some of these foreigners’] own countries in most regards, so those issues are no longer so important.

FIAC recently hosted a meeting regarding women’s empowerment. What are your thoughts on the fact that Seoul never had a female mayor?

Women are under-represented in Korean politics in general. Given that we have already had the first female president and first female prime minister, I’m sure it’s just a matter of time before a woman becomes the mayor of the capital city. To give an indication, in mayoral elections in Seoul in the last 10 years or so, there have been strong women candidates from the political left and right, and in 2018, four of the eight candidates were women.

What are the committee’s thoughts on what Seoul needs to do to make it more attractive for investors abroad?

Some things are beyond the capacity of the city government, like tax incentives.

But I think the soft power of Korea has grown over the years. Korea was considered a difficult place to be. The further away you are from Korea, the more North Korea is in the news, the more it makes the peninsula seem as if it is a dangerous place. These sorts of things, the officials promoting Korea wouldn’t think about because they are so accustomed to having North Korea and their provocations.

But South Korea has been able to develop foreign investment because the Americans have been here, and that gives confidence to investors.

What do you think about the groups in Korea calling for the exit of the American troops?

I think the Korean government, whoever is in power, would be very careful about the impact of any decision like that. I mean, look at how long it took for the American troops to move to Pyeongtaek - it took a whole generation. The American base in Seoul used to be on the edge of city, and it eventually came to be right at the center of the city. Imagine if there was a foreign military base in Central Park in New York. They never wanted to move it because the military always said the North Koreans will interpret that as lack of willingness [from America] to protect the capital.

So in a similar way, you might get a few people on the streets saying Americans should go. They are a distinct minority. And if American troops were to leave, the impetus would come from the Americans.

You were also part of the foreign press here for years. What kinds of news are foreign readers interested in about Korea that perhaps neither domestic English news nor the foreign media here are covering well?

A specific problem I see with the Korean press in English is that if you look at where news comes from, it’s almost invariably coming from a political organization, the government or businesses, to the reporter. If you go to another country and open up the paper and see where the news comes from, a lot of stories comes from courts or a reporter being out on the street, hearing something.

I think the reason for that is economics - there are not enough reporters in the papers, and the reporters are often overworked so they don’t have time to go out on the streets and find news or be curious about something and write an interesting story about it. Stories could even be about how the weather suddenly got cold, so you speak to 20 people on the streets about their experiences and write a story out of it. You don’t see stories like that. From that point of view, it can be difficult to feel you really know what’s happening, from the perspective of [a non-Korean speaker] who is living in Korea.

You covered the 1980s democratization as part of the foreign press at the time. Do you think the democratic system in Korea is what the people had envisioned during those initial years of democratization of the country?

I think one thing no one imagined as one of the consequences of democracy arriving through mass street protests is that for the 30 years since then, there have been street protests, almost daily. The reason for that is that the institution of justice has not caught up with other changes. When people have a grievance, they don’t feel they can go to the police or courts to get it solved. So they have to stand outside buildings of companies or City Hall and shout until something gets done.

What I’m worried about now is that the new tactic which we have learned is impeachment. So from the moment President Moon Jae-in came into power, people have been waiting for an opportunity to push for him to be impeached. Because this is the new political weapon, if you’d like, and that is why it was foolish to impeach Park Geun-hye so quickly and easily because of the consequences of actions like that. That’s why even in America, people think Trump is terrible, but he probably will not be impeached. It’s just that they know the consequences of impeachment.