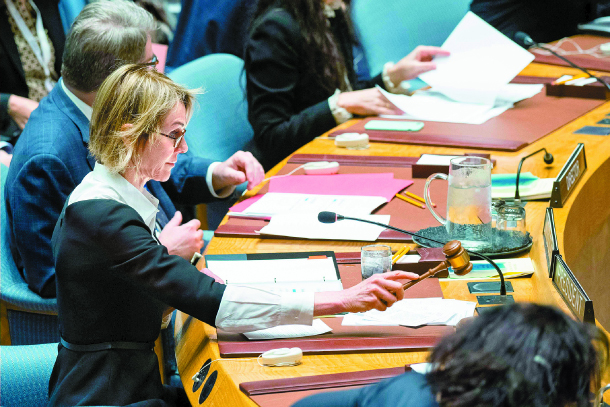 U.S. Ambassador to the UN Kelly Craft chairs a UN Security Council meeting on “Non-proliferation/Democratic People’s Republic of Korea” on Wednesday at UN Headquarters in New York. The United States warned North Korea of consequences if it makes good on suggested threats of a missile test in the New Year, while offering flexibility if it stays in talks. [AFP/YONHAP]

Washington is ready to be flexible and take “simultaneous” actions in North Korea’s denuclearization process, the top U.S. diplomat to the United Nations told the UN Security Council Wednesday, while warning Pyongyang against further missile provocations.

“We have said many times before that we remain ready to engage in this comprehensive process,” said Kelly Craft, the U.S. ambassador to the UN, at a Security Council session on North Korean nonproliferation in New York City. “We remain ready to take actions in parallel, and to simultaneously take concrete steps toward this agreement. We are prepared to be flexible in how we approach this matter.”

The meeting was held amid concerns Pyongyang may be preparing a long-range ballistic missile launch and as North Korea’s year-end deadline for a breakthrough in denuclearization negotiations with the United States approaches.

Addressing Pyongyang’s threat to take a “new path,” Craft said this may mean that the North could “launch space vehicles using long-range ballistic missile technology, or that they could even test launch intercontinental ballistic missiles (ICBM), which are designed to attack the continental United States with nuclear weapons.”

She said that “continued ballistic missile testing is deeply counterproductive to the shared objectives” reached by U.S. President Donald Trump and North Korean leader Kim Jong-un in their two summits in June 2018 and last February. North Korea halted nuclear and long-range missile testing since late 2017 to go into dialogue with the United States but has launched short-range missiles frequently over the past several months. Denuclearization negotiations have stalled as the two sides struggled to narrow differences on the scope of denuclearization measures needed for sanctions relief.

Pyongyang announced Sunday it conducted a “very important test” at its Sohae Satellite Launching Site in Tongchang-ri, North Pyongan Province, the previous day, raising concerns that it could be preparing an ICBM test.

Craft said the “deeply troubling indications that the DPRK is headed in a different direction” was the reason for the Security Council meeting, referring to the North’s official name, the Democratic People’s Republic of Korea. She warned that ballistic missile tests, regardless of their range, undermine regional security and stability, violate UN Security Council resolutions and “risk closing the door on this opportunity to find a better way for the future.”

Washington hopes to “not find ourselves at an inflection point in the near future,” she said, encouraging Pyongyang to “make a bold decision to engage with all of us.” Otherwise, she warned that the Security Council will “prepare to act accordingly.”

Craft said that missile and nuclear testing will not bring North Korea “greater security” nor help it “achieve the economic opportunities it seeks.”

However, China’s top envoy to the UN stressed during the meeting that it is “imperative” to ease sanctions on the North, especially for humanitarian reasons, while encouraging a “phased and synchronized” approach to denuclearization.

“We have been a really loud voice encouraging parties to resume dialogue,” Zhang Jun, China’s ambassador to the UN, told reporters on the sidelines of the meeting. “Also for China, we think it’s also appropriate for the Security Council to take action in adjusting the sanctions imposed against the DPRK.”

He said that the relevant Security Council resolutions also have “clauses concerning the reversible part of the sanctions.”

Zhang continued, “We think by doing so, we may really encourage the relevant parties, especially [the] DPRK, to go forward along the right direction, and it may also create a more favorable environment, creating better conditions for further dialogue.”

China, he added, will encourage “the two direct parties to be engaged in dialogue in building up confidence and mutual trust and also in narrowing their differences.”

He continued, “It’s really time for the Security Council to think about or to take actions adjusting the sanctions especially those areas affecting the livelihood of innocent people including those innocent children and avoiding a humanitarian disaster there. That will also help the relevant parties to build trust and to build confidence that will also be conducive for a lasting political situation.”

Zhang also took a shot at Washington, saying that the sanctions “are being used as tools against China,” and “China is really suffering the long-arm jurisdiction from another country,” without naming the United States. The two countries have been locked in a trade war which often has bled over to security issues. Beijing is “completely against” the imposing of sanctions on Chinese enterprises and individuals, he added, in reference to U.S. sanctions targeting companies and people dealing with North Korea.

China is one of the five veto-wielding permanent members of the Security Council who have traditionally sided with North Korea. The other members are Russia, France, Britain and the United States.

Russian Ambassador to the UN Vassily Nebenzia also talked to media after the meeting, calling for a resumption of dialogue. “Until recently, North Korea in fact delivered on its promises to freeze, hold its tests,” he said. “But we cannot expect it to continue doing this indefinitely given the absence of any moves in response.”

Nebenzia underscored that negotiations are “a two-way street” and said that while the United States did not “elaborate” on its more flexible approach, Russia would “welcome flexibility.” He stressed that the Security Council resolutions “are not about sanctions alone” but “about a diplomatic and political settlement on the Korean Peninsula.”

Cho Hyun, South Korea’s ambassador to the UN, during the opening of the Security Council meeting, strongly urged Pyongyang “to fulfill its obligations under the relevant UN Security Council resolutions and remain meaningfully engaged in dialogue with the United States and the Republic of Korea so that progress in negotiation can lead to concrete results” and asked for support in building a “peaceful, nuclear-free Korean Peninsula,”

North Korea has been unusually mum on the Security Council session so far.

Craft told reporters at the UN the same day, “Let me be clear, we have not asked North Korea to do everything, before we do anything. We are prepared to be flexible, but we cannot solve this problem alone.” She said North Korea needs “to do its part, and it must avoid provocations.”

Craft sent out a series of tweets Wednesday that said the Security Council meeting “should send a very clear signal to North Korea that the Council is unified in its vision of peace and stability in the region.” She listed three criteria for North Korea: to avoid provocations; abide by UN Security Council resolutions; and engage in substantive talks to achieve complete denuclearization.

U.S. President Donald Trump on Dec. 5 hosted a luncheon of the five permanent members of the UN Security Council. Likewise, Stephen Biegun, the U.S. special representative for North Korea, met with UN ambassadors in a lunch meeting including Cho ahead of the meeting to craft a unified position on the North.

Biegun, nominated as U.S. deputy secretary of state, is expected to make a trip to Seoul as early as Sunday and could possibly make contact with Pyongyang officials during the visit to try to put back on track denuclearization negotiations and meet with his South Korean counterpart Lee Do-hoon.