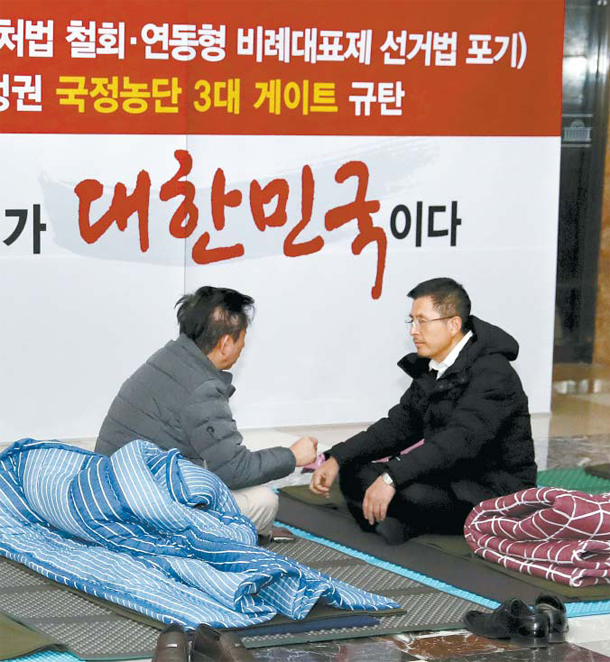 Opposition Liberty Korea Party Chairman Hwang Kyo-ahn, right, converses with a lawmaker from his party during an overnight sit-in in the Rotunda Hall of the National Assembly in Yeouido, western Seoul, on Thursday to protest a set of fast-tracked bills promoted by the ruling Democratic Party. [NEWS1]

The ruling Democratic Party (DP) said Thursday it would call a vote on a contentious set of fast-tracked bills on electoral and prosecutorial reform at the National Assembly today - which may be blocked by an opposition filibuster.

The main opposition Liberty Korea Party (LKP), which has warned it would stage a filibuster to stop the bills, began a sit-in Wednesday at the National Assembly building in Yeouido, western Seoul, in protest of the fast-tracked bills and the railroading Tuesday of next year’s budget by the DP and its minor allies during a plenary session.

At a party meeting, DP floor leader Rep. Lee In-young said his party would not attempt to obstruct the LKP filibuster but that DP lawmakers would fight back with their own speeches and “use the debate floor to directly inform the people about the need for prosecutorial and electoral reforms.”

Claiming the LKP had resisted all DP offers for negotiations, Lee slammed LKP Chairman Hwang Kyo-ahn’s decision to fight the bills rather than attempting to reach a compromise.

Hwang, who only recently ended an eight-day hunger strike protesting the Moon Jae-in administration, called the DP’s motion to vote on the bills a “legislative coup to achieve a leftist dictatorship.

“[Today] will be an important time that will decide the fate of democracy,” Hwang said. “We will fight with extraordinary resolve and a resolute stance.”

The bills in question are a set of proposals that have been subject to intense political controversy since they were fast-tracked by a four-party coalition led by the DP in April.

The electoral bill would change the balance of single-member constituencies and proportional representatives in the 300-member legislature, while the prosecutorial bills are designed to create a new investigation agency focusing on corruption by senior government officials and redistribute investigative powers between the police and prosecution.

For months, the parliament has been dominated by the contentious bills, and late last month the LKP announced it would filibuster all outstanding bills at the National Assembly - 199 proposals. Parliamentary rules forbid a filibuster on budget proposals, and on Monday, a last-minute accord was struck by the floor leaders of the DP, LKP and Bareunmirae Party to pass the budget for next year in exchange for the LKP lifting its filibuster plan.

But the LKP reneged on the compromise just hours later owing to opposition from its rank-and-file lawmakers. This resulted in the DP and four other minor parties in the National Assembly - which together command a majority - to ignore the LKP altogether to pass the budget bill on Tuesday.

Given that the LKP shows no sign it will partake in negotiations, the DP and its minor party allies - dubbed the “four-plus-one alliance” - are expected to repeat Tuesday’s move with the fast-tracked bills, as well as other remaining bills that require a vote, like a much-publicized proposal to reform private kindergartens.

In such a case, the LKP is likely to mount a pre-emptive filibuster. Lee said the DP would counter with its own speeches in order to avoid letting the LKP monopolize intense media scrutiny to broadcast its political agenda.

Since the National Assembly is currently in an extraordinary session, parliamentary rules dictate that filibusters on certain bills can only run until the end of that plenary session and that the bills must be voted on at the beginning of the next plenary session.

Tuesday is the day candidate registration begins for the general elections in April. For parties to plan for those elections - particularly the number of candidates they need for constituencies or proportional representative seats - the DP coalition has little choice but to force through the legislation before Tuesday.

The LKP is actually divided over whether it should continue on the hard-line filibuster course advocated by its leadership. Many of its lawmakers, like former floor leader Rep. Kim Sung-tae, publicly said at a meeting Wednesday that the party should consider negotiations to mitigate some of the fast-tracked proposals it most fiercely opposes.